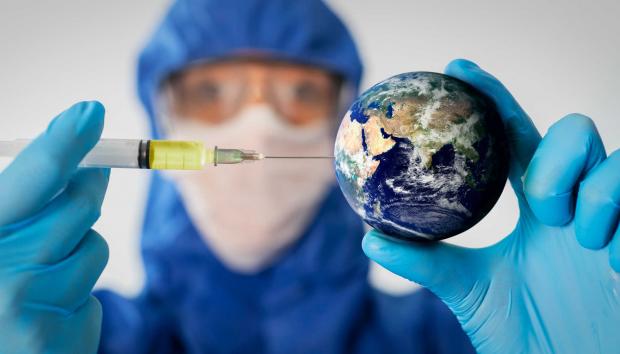 Stop national egoism! Start vaccination with frontline health workers and nursing home workers of all countries! Expropriate all profit-making companies in the health care industries! An internationalist solution to an international problem! Protect human life against the fetters set up by capitalism!

The civilisational crisis created by the Covid-19 pandemic under conditions of capitalism has now entered a new and higher stage. Just as the first step is said to be taken towards the after-Covid-19 world with the rolling out of the vaccine in the United Kingdom, to be followed closely in other advanced and so-called “newly emerging” countries, the entire world is now watching with bewilderment the blind national egoism of capitalist governments in fixing their attention solely on their own population. 40 million doses for Britain, Joseph Biden’s eye-catching “100 million Americans to be vaccinated in the first 100 days” of his presidency and similar political shows only go to demonstrate the utter narrow-mindedness that continues to grip the rulers of capitalist countries, especially those that govern the rich imperialist ones. This is not only parochial in its whole approach but self-defeating as well. This is only the tip of the iceberg: in fact, these countries are hoarding vaccines. Even back in August, according to Nature magazine, the United States had secured 800 million doses of at least 6 vaccines in development, with an option to purchase around one billion more. The United Kingdom was the world’s highest per-capita buyer, with 340 million purchased: around 5 doses for each citizen! They obviously intend to use their possession of extra doses as blackmail on some other countries.

The Covid-19 pandemic is an international scourge in its essence. So long as all countries of the world are saved from this plague, no country will be safe. The truth is as simple as that. And yet this blind rush towards national salvation, this irrational insistence on the primacy of the national interest has taken under its grip the rolling out of the vaccine. This is against the higher interest of humanity. This is irrational. This is pure national narrow-mindedness. This is foolish and rotten to its core. It is a continuation and further development of the civilisational crisis that has been haunting all humanity under the conditions of this pandemic.

The labouring population of the world has no interest in this national parochialism. It will backfire. Proletarian internationalism, on the contrary, has proven once again to be the rational worldview that corresponds to the conditions of our age, where an increasingly integrated world economy and politics requires policies that do not set nation against nation, but, on the contrary, dictates all nations to commit themselves to a rational system of planning that brings together and welds all national interest into a well-calibrated interest of humanity at large. Capitalism has proved that it has entered into contradiction not only with the extremely socialised productive forces that it itself has created but with human life.

We, therefore, need to push for workers’ control over the administration of the vaccination. Let all vital decision-making in the administration of the vaccination process be put under the control of the professional organisations of the medical profession, of trade unions of health workers, of trade unions at large, and of community organisations of the poor.

We also need to push for an immediate move to allow all countries with the prerequisite economic and technological capability to be able to produce, on a mass basis, the vaccines in question. At this pace, it is impossible for the pharmaceutical companies in question to produce the mind-blowing number of doses the world population needs (almost twice the population of the world!) in a span of time necessary for the prevention of what have now become hundreds of thousands or even millions of unnecessary deaths. Human science has found the solution to the protection of human life in the face of this horrendous pandemic. Let capitalist relations of production not stand in the way of the discoveries of the human mind and the saving of human lives! It is the monopolistic profit greed that will obstruct the eradication of the disease for years. Expropriate the pharmaceutical giants! Do away with what is euphemistically called “intellectual property rights” and what are in a matter of fact the right of these monopolies to pillage and deprive entire populations of their right to life! Mobilise all resources to provide vaccination to the population of the entire world!

To do all of this, we need to work for the taking of power by the working class of each country in alliance with the rest of the oppressed and exploited masses of their respective countries.

The International Socialist Center Christian Rakovsky calls all the organisations of the workers, toilers, and the oppressed of all countries world to support this Appeal and to demand that the vaccination program which is about to start internationally be organised according to the higher interest of humanity on the basis of an embedded internationalism that bases itself on the absolute interdependence of all countries in defeating the virus.

Plan vaccination with absolute priority to the frontline health workers and caregivers of nursing homes of all countries simultaneously!

Let that be followed by priority groups of other categories such as the elderly, those under high risk of mortality due to other serious conditions, and essential workers!

Free vaccination for all in every country!

Authorize all countries to set up manufacturing facilities for the available vaccines so as to avoid millions of possible unnecessary deaths!

Expropriate all pharmaceutical giants and every entity that preys upon the health of the people in order to make profits!

Help the poorest and most indebted countries vaccinate their entire population!

Bring down capitalist governments and replace them with governments of the working masses in each country!

The People alone will save the People!