For a new Baku Congress of the Peoples of the East! For a United Front of Workers and Toilers of the MENA and the Caucasus! 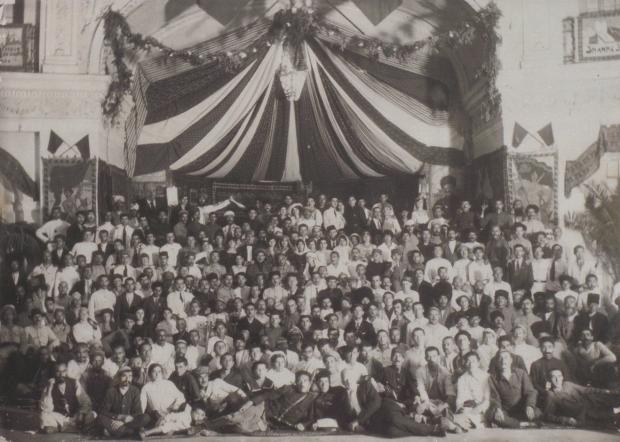 Comrades of the Middle East and North Africa (MENA) and of the Caucasus!

One hundred years ago to the day, there opened the First Baku Congress of the Peoples of the East, organised by the Communist International, the most advanced organisation in modern history of the proletariat and the toilers of all countries, the world party of revolution. Established in 1919, under the star of the glorious October revolution of 1917 that ushered in not only the first workers’ state but also an entire process of world revolution, the Comintern blew new energy into the forces of progress in the Middle East and North Africa (MENA).

In his opening remarks, Nariman Narimanov, the leader of Azerbaijani communism, the practical hosts of the congress, put the question in clear terms: “The grey-headed East, which gave us our first notion of morality and culture, will today shed tears, telling of the sorrow, of the grievous wounds inflicted upon her by the capital of the bourgeois countries.”

That “grey-headed East” has become wiser through her experience for the last one hundred years.

Contemporarily with the Baku Congress, revolutions broke out successively in Azerbaijan, Turkey, Iran, Egypt, Iraq, Morocco (Rif), Indonesia (then known as Java), Syria, and Palestine. This first wave of the MENA-Caucasus revolution was followed by a wave of anti-colonialist national revolutions in the aftermath of the Second World War (Egypt, Iraq, Syria, Algeria, Sudan, Yemen, Oman, Libya, etc.) in the 1950s and the 1960s. Then came the Iranian revolution, a tragedy in the midst of victory, a revolution that ended up being a bridge between two despotisms, despite the powerful wave of the people’s struggles.

None of these, though, can match the splendour of the Arab revolutions of the last decade. In a few months’ time, we will be celebrating the 10th anniversary of the glorious revolutions in Tunisia and Egypt that swiftly brought down dictators that bled their people to misery for three decades. These were followed by the uprisings in Yemen, Bahrain, and Syria, this last one hijacked by reactionary sectarian forces early on. This entire revolutionary wave opened an era of unprecedented effervescence in the MENA region. After a lull that came about as a result of the defeat of the Egyptian revolution at the hands of the Bonapartist al Sissi, the years 2018-2019 saw a reawakening of the revolution in our broader region: revolutions in Sudan, Algeria, Iraq and Lebanon, and lesser events in Jordan, Tunisia again, and, for a brief moment, even Egypt. All the while, the heroic people of Palestine continued to demonstrate, to protest, reacted against repression, all in the name of the fight against the usurpation of its most fundamental rights, without any sign of abatement.

During this period, the two non-Arab countries of the MENA region, Turkey and Iran, also rose in revolt. Turkey displayed its revulsion against the despotism it was more and more subjected to through the popular rebellion that goes by the name of Gezi Park in 2013, the Kurdish mobilisation in favour of Kobane in 2014, and the metalworkers’ sit-in wildcat strikes of 2015. Iran has been in effervescence since the last days of 2018, but exploded in rage in November 2019, and is still rocked by strikes and struggles of all kinds. During this period, the peoples of the Caucasus have become fed up with the moves made by their native bourgeoisie, their oligarchy, their state bureaucracy, and the imperialists. No one should be taken aback should the wave of revolution and rebellion move over to the Caucasus in the near future.

Comrades of the MENA and of the Caucasus!

The masses, the workers, the fellahin, the urban poor, and the youth have shown, again and again, that they are ready to struggle to bring down the hateful political regimes that repress the peoples of our region and the exploitative socio-economic order that impoverishes us by the day. It is up to us socialists, communists, revolutionaries to provide leadership to the masses that have risen. We need leadership not to lose these revolutions the next time around.   There is a dire need for a consistent political leadership that receives its nourishment from Marxism.

Let us come together once again as the peoples of the East. Baku 1920 hosted more than 2,000 delegates from 30 countries. The participants concurred that the solution to the problems that the labouring population of the East suffered came down to putting an end to the rule of the sultans, the shahs, the emirs, the begs, the agas, the baltadjis, the feudal landlords, the usurers and the capitalists and, of course, their representatives, military or civilian. And because there stood the imperialists behind those forces, they called for a fight against imperialist interests. Today, too, we have to fight both the domestic parasites and their foreign backers.

Let us come together, then, and join our forces so as to form, through the sheer encouragement that international cooperation will bring, revolutionary political forces in each country so as to lead forward what is best in the situation of each of our countries. To that end, let us form a committee, a center, a union of international forces of struggle against capitalism in the region and against its protectors, the imperialist forces.

Once we are able to join hands, nothing can stop us from reinventing the thrust of the Baku Congress 100 years ago. Let us gather all our forces and make the future even better than the past!