Fascism in on the brink of power: Let us take the path of 2002 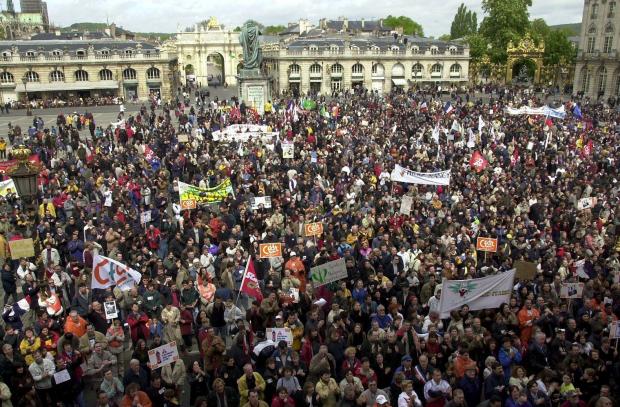 With the results of the presidential elections, the gravity of the moment is confirmed. Marine Le Pen and the fascist threat she represents – that we call the “blue plague” – is closely following Emmanuel Macron according to the initial results of the elections. However, the situation is profoundly altered compared to 2002 and 2017, when the FN (National Front, the old name of the RN, Marine Le Pen’s party) had reached the second round. This time, with its two candidates, Marine Le Pen and Eric Zemmour, fascism establishes itself as the main political force in France. According to the polls, the voting intentions for Macron and Le Pen in the second tour are almost equal. It is useless to hide the truth: fascism is on the brink of power.

As in 2017, commentators and newspapers will soon start calling for blocking Le Pen, by voting for Macron. We warned in 2017, and we repeat it now: every vote for Macron will become a weapon in the hands of fascism in the upcoming battles. The power of Macron, who won the elections in 2017 with such a “republican block” against Le Pen, only reinforced the fascist threat. What would a so-called block serve if it is doomed to defeat in the face of the fascist threat? We propose another block, the only one that is able to stem the horrors of fascism from overwhelming France. It is indeed the fierce struggle of hundreds of thousands of workers, the youth of working-class neighborhoods and students. This is the insurmountable obstacle that the working people of France formed in the streets in 2002. Let us do in 2022 as we did in 2002.

All organizations are under an obligation to act without further delay and assume their responsibilities in the face of history. Organizations from the revolutionary Marxist tradition, LO, NPA, POI, POID and Révolution Permanente, must act immediately to organize the mobilization. The organizations of the working-class neighborhood, such as FUIQP, as well as the labor unions, must take to the streets to defend their vital interests against fascism. The rank-and-file militants of the LFI, PCF, the Greens and the Socialist Party must participate without hesitation in this historic struggle. The workers, the youth of the working-class neighborhoods, the students and the intellectuals must take sides in this mobilization to crush fascism before it is too late.

To lead this unavoidable and historic struggle after the second round, we need a United Workers’ Front. The economic and political organizations of workers, such as CGT, Solidaires, CFDT, LO, NPA, POI, POID and Révolution Permanente, must take the initiative to create it. The PCF and LFI must participate in this front, just like other trade union organizations and organizations of working-class neighborhoods, students, intellectuals and women. Preparations must be put in place to defend the people of the working-class neighborhoods that the generals of April 2021 called “the hordes.”

Let us crush fascism with no hesitation!