DIP Statement: No to fraternal bloodshed for American interests! 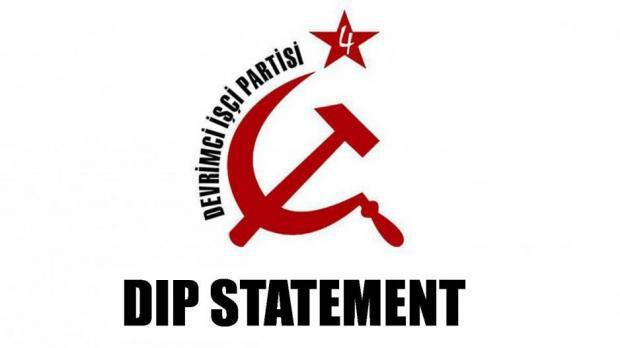 This statement was launched by DIP on its website Gerçek (www.gercekgazetesi.net) one night before Turkey started the operation named “Peace Spring” in Northern Syria. Here we reproduce the English translation of the statement, immediately interpreted for the international audience.

The “Peace Spring” (not to be confused with the Spring season, here the corresponding word for the Turkish meaning is fountainhead) operation that Turkey is preparing to carry out, is part of an attempt to extend the NATO corridor, along the border towards the east of the Euphrates river, established within the Syrian territory with the Euphrates Shield and Olive Branch operations. It has the label “Made in USA” on it. Mixed messages given by the US administration are the manifestation of a policy of carrot and stick they use to subdue Turkey until today.

The NATO corridor is the project of the US to increasingly secure its military and political positions within the Syrian territory. Here it seems that Turkey has been appointed as the subcontractor. The goal is that this corridor will have an impact on enhancing the influence of the imperialist camp as Syria's future tends to shape. At last, the NATO corridor will mean positioning Turkey against Syria, Iran and Russia as the tutelar of armed gangs which are servants of imperialism.

In order to convince the public opinion in Turkey, this war had to be presented as a matter of survival and national security. In Turkey the government implies this with the slogan “survival issue”. When saying “We understand Turkey’s legitimate security concerns” USA reinforces this same perception. Because nationalist and chauvinist propaganda creates a cloud of mist behind which the real and common enemy imperialism and the colonialist bourgeoisie hide. The self-determination of fellow Kurdish people, whether in Rojava or elsewhere, cannot be seen as a security problem. On the contrary, the servitude of Kurds has been the chain around the neck of Turks and Arabs, as well, throughout modern history.

The security problem is the US, is NATO, is the Incirlik base, is the dollar!

Turkey’s main security problem is not out of its boundaries, is inside. Turkey's NATO membership is a security threat, not a security shield. The Incirlik base, where the tanker aircrafts refuelling the fighter jets that bombed the Grand National Assembly of Turkey during the 2016 coup attempt took off, has always been open, is still in operation today and torments the peoples of the Middle East every day. Where there is US imperialism, there is no safe zone for Turkish, Kurdish, Arab, Persian and other peoples!

Against the possibility of Turkey’s deviation from the American plan, Trump once again holds the dollar stick in his hand and says “I will destroy your economy”. Turkey, with its economy circulating poisonous dollar in its veins, is completely unprotected against this threat. The government who holds forth as “We are not a country to act according to threats” delivered pastor Brunson back when previously seen this stick. Today, again, they are in a position to give Trump “whatever he wants”. And for American interests, Trump lusts the blood of the children of the Turkish and Kurdish peoples. To be freed of dependence on dollar has become the main issue of “survival” for Turkey.

No to Zionist settlement model!

The return of Syrian refugees in Turkey back to their home cannot be achieved through a military operation, but only through a political solution in which imperialism is excluded. What is now presented as a so-called solution is similar to the Zionist settlement model which Erdoğan at the UN meeting criticized Israel for. An attempt that will change the demographic structure in Syria via armed gangs that are residuals of FSA (Free Syrian Army) might make some contractors rich but this will drag Turkey, in a more profound way, into an illegitimate position as an American subcontractor.

US puts ISIS out to tender!

The American plan also wants the prisons, where tens of thousands of ISIS (DAESH) members are being kept, to be delegated to Turkey. Those who believe that everyone who does not obey their so-called caliph are the enemies of Islam, have committed crimes against the Arab, Kurdish, Assyrian, Yazidi, Turkoman and other peoples of Syria. Trials of those cannot be delegated to a political will which did not and could not call ISIS to account for massacres it committed in Turkey. Like the return of Syrian refugees, this problem requires a political solution that reflects the will of the peoples in Syria. The already chosen route is enhancing the problem, far away from solving it.

The so-called secularists who take the risk of reviving ISIS in order to suppress the Kurds!

In 2014, Ahmet Davutoğlu, the foreign minister of the Erdoğan government, said that ISIS was made up of angry young people and tried to legitimize the movement. In October 2014 when ISIS attacked Kobane, Erdoğan drew the anger of almost all the Kurds in Turkey on himself by saying “Kobane is about to fall”. It is now obvious with all the evidence that countless massacres of ISIS, especially the Suruç and Ankara massacres, were acts that could be prevented. Do the representatives of the Westernist-secularist bourgeoise who cheer for the entrance of Turkish soldier to Syria because of the so-called survival issue, first and foremost CHP who supported the military operation mandate know what kind of policy the AKP government will pursue in relation to tens of thousands of imprisoned ISIS members and their families? ISIS is a great danger for the future of this region. One aspect of the Peace Spring is a possible resurrection of this repressed danger. The bloodbath and sectarian wars in the Middle East have proved that secularism is as vital and indispensable as bread and water. Secularism must be defended not only against ISIS and the like, but also against Western imperialism and chauvinist nationalisms, which at the first possible opportunity cast away with it.

No to fraternal fight! Respect the living in freedom of Kurds!

The US has claimed for many years that it has provided security for Kurds against ISIS. Today it says the same for Turkey. However, the one and only thing that the US would like to provide security for are American interests. Today, both the ones that get pumped up with Trump’s one statement and start preparing for a military expedition singing janissary anthems and the ones looking at the disagreements within the US administration and hope for peace from there are making the same mistake. In possible clashes, deaths in the course of resistance which make use of American weapons against the military operation of an army which belongs to NATO, will be among the children of those fraternal peoples. Once again, the slogan “peace with the Kurds, war on the US” is before us as the only way out!

No to the military operation and the NATO corridor!

US get out of both sides of the border!

Respect the right of Kurdish people to self-determination!

Turkey out of NATO! Shut down Incirlik!

Peace with the Kurds, War on the US!