DIP-EEK joint statement: War against war in the Aegean and the Mediterranean! 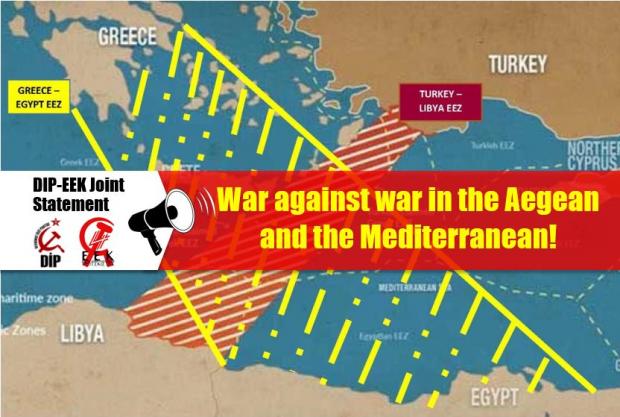 Navies on the Mediterranean and the Aegean in commotion, fighter planes zigzagging in the air, and behind all of this the interests of the ruling classes of Greece and Turkey in severe clash. This confrontation might even result in a war disaster. The Greek and Turkish bourgeois states advance conflicting claims over their respective maritime jurisdiction. Those who advance these claims also pretend that they are defending their own national interest to the benefit of their own people. The truth is the exact opposite.

At this very moment, both in Turkey and in Greece, the capitalist governments in power are each forcing the working population of their country to shoulder the heavy burden of the economic crisis each country is going through. These governments are lying to the people mired in poverty when they promise them the natural wealth of the Eastern Mediterranean. The fact of the matter is that the ruling classes in each country are offering the lion’s share in the partition of the natural riches of the Mediterranean to the great powers that pose as their protectors. This is a fight between the Totals and the ENIs and the Shells and the BPs and the Exxons, not between the workers of Greece and Turkey!

While, on the one hand, both sides are trying to put on a show for their domestic public out of the manoeuvres between the battleships and the dogfights between the war planes, they are, on the other, trying to draw to their side as great a number of imperialist powers as possible. As a matter of fact, both governments and ruling classes are subservient to the conflicting imperialist powers, which are manipulating them for their own antagonistic interests.

The Greek government is misleading the Greek people itself by pretending that it has the support of the EU by saying “the frontiers of Greece are the frontiers of the EU”. In effect, the European imperialist powers, especially Germany and France have antagonistic interests and try to play each country against the other. Macron has promised military and naval support to the Mitsotakis government in exchange for selling two French warships to Greece and the use the Greek armed forces for extending French imperialist involvement in Libya's civil war, in ruined Lebanon and the Eastern Mediterranean as a whole. Merkel is selling six submarines to Turkey, having vested interests in the country's economy and  closer relations with the Turkish ruling class.

The Turkish ruling class, for its part, acclaims Brexit because it sees in this an opportunity for British sponsorship of its Islamist adventurism in quest of a Rabiist domination over the Sunni world and is, thereby, preparing the ground to transfer the wealth of the country to imperialist usurers through the ponzi scheme running along the London-Istanbul axis.

Being NATO members, both countries are chasing the United States in order to curry its favours. The Greek government promises new bases on its soil to US imperialism. At the same time, under the US imperialist orders given by Pompeo, it has signed an agreement with the al Sissi's dictatorship in Egypt on their mutual Exclusive Economic Zones to counteract the Turkish-Libyan similar agreement.

Turkey intimates that it is prepared to act as proxy in America’s war in Syria and Libya against Russia. The S-400 missiles Turkey has recently purchased from Russia serve as bargaining chips in its negotiations with America rather than being a threat to Greek war planes.

The first link in the chain of robbery of hydrocarbon wealth in the Eastern Mediterranean is Israel. Greece hopes to transport the wealth Israel is preparing to usurp from its rightful owners, the Palestinian people, to Europe over the Republic of Cyprus and Crete. Turkey, on the other hand, is trying to convince the Zionists that pipeline transportation through Adana on its southern shore would be more profitable. Greece is signing new military agreements with Israel. Turkey, for its part, is acting as the major military shield for Israel against Iran through the shameful radar base stationed in the eastern part of the country, in Kürecik, Malatya.

Today, the Mediterranean has almost become an international war theatre. The last decade, the Mediterranean had been turned into a basin of revolution, both with the mass upsurge in  Southern Europe, the Arab Revolutions, the Gezi Park rebellion.  Despite defeats, reversals, betrayals, military coups and imperialist aggression, the revolution is returning, after a pause due mainly to the pandemic, in many countries. Lebanon is a clear example of the new turn of the rising masses that frightens the ruling classes and imperialism.Those who are now turning the Mediterranean virtually into a war zone are the same bourgeois classes who suppressed the strikes and imposed the austerity packages in Greece and Turkey, the despotic governments that repressed the demand of the peoples for freedom and their fascist street bands of all stripes.

It is also these same forces that are setting up pacts with those in the Arab world that are sworn enemies of every revolutionary or liberating effort and traitors to the cause that were originally on the side of emancipatory movements. Greece has set up a front with the Bonaparte al Sisi, murderer of the Egyptian revolution, while Turkey has tied up with the hijackers of that same revolution, the Muslim Brotherhood. Greece is collaborating with the Emir of Abu Dhabi, Turkey with that of Qatar. Greece has embraced the Saudi King, Turkey that of Morocco. And in Libya they confront each other through the intermediation of the warlords on opposing sides that they have joined forces with. Can there be the slightest chance of an auspicious result emanating from this kind of fight that would favour the lot of the toiling peoples of the entire region?

Finding itself in the midst of this entire reactionary and wrongful struggle for the sharing of the hydrocarbon booty, Cyprus has, so the speak, ceased to be an island on which flesh-and-blood humans live, to become an object of plunder, with the Greek and Turkish Cypriots being treated not as human beings but as repositories of natural resource wealth. The island, as well as all that resides on it, is under total threat. Peace and a resolution of the “Cypriot question” are moving away with each passing day. Turkey and Greece compete with each other on the basis of the rights that the status of “guarantor” supposedly grants them, but the only entity on the island whose survival is guaranteed is the set of ill-famed British bases on the island that, from time to time, spits blood and death on the peoples of the Middle East.

As DIP and EEK, we call on the workers and toilers of Turkey and Greece. Once again we are face to face with reactionary, chauvinist and militarist shackles that we need to shatter. Let us turn the Mediterranean once again into a revolutionary basin. The labouring people of Greece and Turkey, of Cyprus and the entire Mediterranean share common interests. These interests clash with the interests of the domestic bourgeoisie in each country, as well as with imperialism and Zionism. We need to fight against the ruling classes of our own country, the exploiters, the collaborators of imperialism and Zionism and extend a hand of fraternity to the other side of the Aegean.

Stop the threat of war in the Mediterranean! We shall not kill or die for the euro or the dollar or for the big oil companies, the Exxons, the Totals, the ENIs, the BPs or the Shells. Let us step up class war against war! The main enemy is within our own countries—the Greek and Turkish capitalists, their governments and regimes, at the service of their imperialist patrons.

Let us refuse to spill each other’s blood for defending the imaginary boundaries drawn up by the ruling classes and start immediately to eradicate the frontiers that separate us!

Instead of dying for the interests of capital and of imperialism, let us step forward to fight in order to put an end to the capitalist order that exploits all of us and to break the chains that subordinate all of us to European and US imperialisms

Shut down all imperialist military bases in Greece, Turkey and Cyprus!

Turkey and Greece out of NATO now!

Reject subordination to imperialism, of both the US and the EU!

Sever all military, commercial, diplomatic and cultural relations with Israel! Long live the struggle of the Palestinian people for its emancipation!

Forward for a Balkan Socialist Federation where Greece and Turkey stand side by side, along with an independent united Cyprus!

Long live the Mediterranean and the world socialist revolution!