The US says “ceasefire”, Turkey says “pause”: American plan in action without a pause! 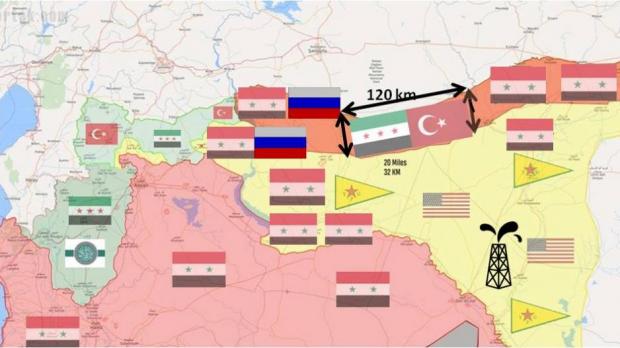 The “peace spring” operation was put on hold on its 8th day according to an agreement between the US and Turkey. A preliminary assessment clearly points to the political rout of Erdogan and the AKP. Erdogan was forced to stop at the Tel Abyad - Ras al-Ayn line of 120 km, without even attaining the full control of Ras al-Ayn, when just a day before he had asserted that Turkey would not stop before establishing a 30 km deep and 440 km long safe zone from the Euphrates river to the Iraq border.

In the coming days, we will hear a lot of talk about the strategic importance of that region. But Erdogan himself spoke to the contrary last year in October: “Right now there is nothing seriously disturbing on the east of Euphrates. If we look at that region called east of Euphrates, we see mostly desert land. Here the really important thing is Deir ez-Zor. Since it is an energy potential. It has a basin, that is the real deal...” Today the US has driven Turkey to the desert, in Erdogan’s words, and maintains the control of the energy basin of Deir ez-Zor in the south, “the real deal”, through YPG.

Even though the agreement mandates the abandonment of Tel Abyad - Ras al-Ayn line by YPG, Manbij, Kobane, and Qamishli have fallen under the control of Syria and Russia as they have entered these cities in defense of the YPG. In the given situation, it will be impossible to add these regions to the safe zone in the short and medium-term, for reasons that will be discussed in detail below. Therefore the plan to relocate initially 1 million and later 2 million refugees into the safe zone has become a real challenge.

Finally, all these have happened just after the leak of the humiliating letter of Trump to Erdogan. All the lines of the text point towards the threats of economic sanctions as the leading cause of this agreement. Trump’s threat of sanctions filled with insults was translated into a diplomatic language in the agreement text. The US can, at any time, put sanctions on Turkey the moment the latter deviates from the lines drawn. This has also exposed the real nature of the supposed “good relations” between Erdogan and Trump, and it is highly likely that the leak was done to make it crystal clear which side dictated the conditions of the agreement. While the bourgeois parties and the bourgeois media struggle to convince the people otherwise, this is a political rout.

The face and stance of Michael Pence during the photo-shoot before the meeting between Turkish and American delegations gave a clear indication of the tone of the  meeting to take place. It should not be missed that, even though the diplomatic status of Pence is lower than Erdogan’s, they were positioned as equals at the negotiation table. Erdogan informed the public of this meeting saying “I told them to send a delegation”, yet the posture of Pence was less of an envoy sent at the request of Erdogan and more of one sent to impose an ultimatum. It was likely the American side that leaked Trump’s insulting letter to Erdogan, warning him not to be “a tough guy” and “a fool”, before this meeting. The tradition of having a joint press meeting after the talks was ignored. And the American side making a public statement before Turkey added to the symbolism. The most important of all is Erdogan refraining from making a public statement after such an important meeting.

The public statement made by Vice President Pence and Secretary of State Pompeo touted a ceasefire agreement. Yet Turkey insists that this is merely a pause. Indeed the agreement text, both in Turkish and English, mentions “a pause to the operation” instead of a “ceasefire”. On the other hand, both sides agreeing to pause a conflict as per a written agreement text of reciprocal commitments means nothing but a ceasefire. Only if one of the fighting sides were to temporarily stop fighting on its own initiative, for example due to military, logistical or political reasons, it would then make sense to talk about a pause.

In this atmosphere of conceptual controversy, the Turkish government's claims to “operation, not war” was significantly weakened. It is hard to imagine that they themselves would believe it in the first place. Indeed, just before the “Peace Spring” operation Deputy Chairman of the AKP Numan Kurtulmuş himself was to say “finally we go to war”. This was later retracted and yet the retraction was retracted again by none other than President Erdogan, who himself said: “inshallah, this conquest is to succeed”. Attempts have been made to explain this statement which was never retracted. Eventually, today we have a “non”-ceasefire to a “non”-war.

The war that pulled the plug on Astana

The official rhetoric of Turkey was that “war only happens between states”, and with the TSK (Turkish armed forces) facing the Syrian army, Peace Spring has turned into war, even within the bounds of this rhetoric. Merely hours before the agreement between Turkey and the US, Syrian President Bashar al-Assad described the operation as “flagrant aggression” and declared that “Syria will respond to the assault and confront it anywhere within the Syrian territory through all legitimate means available”. This is a critical statement since the agreement between the US, Turkey, and YPG is non-binding for Syria. According to the agreement, if YPG withdraws 30 km behind the Tel Abyad - Ras al-Ayn line, abandons its heavy weapons and destroys its fortifications then the ceasefire will become permanent and the Peace Spring operation will end. Yet apparently the war against Syria remains.

It is this point that completely exposes the political essence of the Peace Spring operation. The Revolutionary Workers Party (DIP) insisted from the outset that it is a plan “made in USA” and that it is a NATO corridor plan. The DIP statement titled “No to fraternal bloodshed for American interests!” clearly identifies this point: “the NATO corridor will mean positioning Turkey against Syria, Iran, and Russia as the tutelar of armed gangs which are servants of imperialism”. In the following 8 days, the US seems to have made significant progress. The US Special Representative for Syria, James Jeffrey, who famously declared “it’s time to pull the plug on Astana” is much closer to his goals now. The commentary from the Syrian Ministry of Foreign Affairs and Expatriates, released by Syrian Arab News Agency has these striking statements: “This treacherous Turkish aggression makes the Turkish regime lose its position as a guarantor in the framework of Astana, particularly as its aggression completely contradicts the principles and decisions of Astana.” James Jeffrey is watching these 8 days of fraternal bloodshed, when not a single American soldier was harmed but the blood of the Turk, the Kurd and the Arab was spilled, with great pleasure.

This agreement also exposed the fact that a safe zone with a NATO corridor identity is part of the American plan. We are not the least surprised by the fact that the greatest support for the Peace Spring operation came from NATO Secretary General Stoltenberg. Indeed the latest agreement clearly states that the US and Turkey will work in cooperation for the safe zone. US Vice President Pence personally emphasized that the zone would be 20 miles (32 km) deep. YPG forces will withdraw from the region as part of the agreement. However, the concrete situation on the ground indicates that the agreement might be in effect only for the 120 km Tel Abyad - Ras al-Ayn line. Indeed after the agreement between SDF and Assad,  Syrian, and in certain areas Russian, forces are already deployed in Manbij, Kobane, and Qamishli. The Turkish Minister of Foreign Affairs Mevlüt Çavuşoğlu confirmed this in his statement that “we will meet with Russia about those regions”. Erdogan’s plan to create a safe zone from the Euphrates, starting from Manbij, all the way to the Iraq border has already failed. Due to the political landscape discussed before, it will be difficult to reach an agreement with Russia, as they already demand Turkey to return all borderland to Syria. The Turkish side will have to struggle a lot to keep the 120 km Tel Abyad - Ras al-Ayn line at the Sochi meeting with Putin on 22 October and after it. It is also not unlikely that this crisis on the east of Euphrates might spark another conflict in Idlib.

Manbij, Kobane, Qamishli, Al Tabqah and Raqqa falling into the zone of control of Russia might be a tactical retreat for the US. The strategically important Deir ez-Zor is still controlled by the US through SDF. Unlike the northeastern part, the advances of the Syrian Arab Army towards this region during Peace Spring was met with American artillery and airforce. Hence, for the moment, the American retreat should be understood only in relative terms. It should not be thought that the US, which can conduct airstrikes from military bases in neighbouring countries, including Incirlik in Turkey, will completely leave Syria. In the end, this American tactical retreat handed over to Russia the PKK/YPG problem, which was making it difficult to create a joint American line with Turkey against Russia and Iran. Taking into account that PYD is not represented at the Syrian Constitutional Committee meeting at the end of October, this tactical retreat actually increases American influence through its protectorate organizations and Turkey. Even though the NATO corridor is geographically divided, it is still in operation strategically.

Only one way to foil the American plan: Peace with the Kurds, War on the USA!

Despite officially claiming otherwise, Turkey has become a part of a deal with PYD/YPG, albeit through the mediation of the USA. This is not for the first time and it won’t be the last. The problem is that this dialogue is always facilitated by imperialists and organized in line with their agenda. Even though the government rejects being in “war with Kurds”, the US defines the Turkish-Kurdish relationship as a centuries-old “natural animosity” and feeds off of it. Those of us who see the Kurd’s servitude as the chain around the neck of the Turk and the Arab, do not understand a mere ceasefire from peace. We defend that a dialogue between the legitimate representatives of the peoples should be developed, on a voluntary basis, rising on equality and the rejection of imperialist arbitration and intervention.

It is clear that the Syrian Kurdish movement has been abandoned in return for its collaboration with imperialism. The strategy of the Kurdish movement has failed utterly. There is no end to this. Supporting the AKP during “Kurdish opening”, followed by its collaboration with the US, and today getting under the wings of Syria and Russia. If Turkey and the Kurds were to enter into a dialogue, both sides would be able to end this losing streak.

This necessity has been proven once again by this bloody and tragic episode. Our maxim is “Peace with the Kurds, War on the USA!” The road to foiling imperialist plans and putting an end to this fraternal bloodshed passes from there.