US, NATO, EU, NAZIS: HANDS OFF THE PEOPLE OF UKRAINE! APPEAL FOR INTERNATIONAL SOLIDARITY 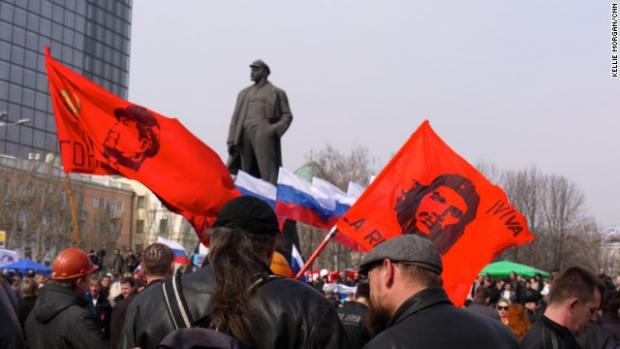 The US Obama Administration and NATO, supported by the EU,  go to war against the proletarian centers of Eastern Ukraine. They ordered their stooges in Kiev to send army troops, tanks, helicopters, and the fascist storm troopers of Svoboda and Praviy Sektor to crash  the rebellion of the working class and the resistance of  the local popular masses to the diktats of the  phony “ interim government” of pro-imperialist oligarchs and Nazis.

On the eve of the launching of the operations, the head of the CIA John Brennan traveled to Kiev obviously to supervise the campaign of military repression of the people, while the White House, in a Press Conference, publicly “urged the government of Ukraine to go forward” to establish “law and order”. They need urgently the order of this barbaric “law” of the capitalist jungle   to impose the measures of social cannibalism demanded by the IMF to transform Ukraine into a colony of US and EU capital.

Already the number of dead and wounded in Eastern-Southern Ukraine is mounting, while not only is the heroic workers and popular resistance fighting back the aggression, but also the assault has produced acts of fraternization between the Ukrainian troops and the people as the soldiers refuse to kill women and children and take the side of the people.

The NATO-sponsored aggression in Eastern-Southern Ukraine threatens not only the Ukrainian people  with a bloody generalized civil war and the peoples of Ukraine and |Russia with a fratricidal war but as well all the peoples of the region, of Europe, East and West, and world peace. We have to stop them by an international mobilization of the workers and popular movements!

No confidence can be placed in the secret diplomacy between the rulers of US, EU, Russia, and Ukraine, which works as a smokescreen for geopolitical games and negotiations between imperialists and oligarchs competing at the cost of the peoples themselves in Ukraine, Russia, Eastern and Western Europe, and all over the world. The  Geneva agreement of April 17 has as an immediate political aim, first of all  disarming of the workers insurrection of the Donbas region, which is declared “illegal”, while the Nazi gangs of Praviy Sektor and Svoboda  are an  integral part of the Kiev “government” , and  they are already included in the “legal” framework of the Ukrainian police and militia. Neither the Kremlin nor the oligarchs but the international working class is the real  class ally of the Ukrainian workers.

Our destinies are interconnected and we have to take things into our hands. We have to fight together the same enemies:  the US/NATO imperialism and its warmongers, the IMF, the EU, and their draconian plans, the oligarchs in all the post-soviet space served by Ukrainian or Great Russian nationalism, ethnic and religious hatred, the new rise of anti-Semitism and fascism.

The so-called elections on May 25 is a sickening fraud as it would take place under a non-legitimate, dictatorial regime,  born out of a coup, under a coalition government of oligarchs and Nazis,  and under the threat of tanks. We call for a boycott of such “elections”.

The fake Verkhovna Rada  of oligarchic Mafias that just loudly applauded the killings in Mariupol  has to be immediately  dissolved. Workers Councils have to be formed everywhere and elect delegates to a new, real Verkhovna Rada,  in a united, independent, socialist Ukraine ruled by the Councils of its workers and people and not by gangsters at the pay of Washington, Berlin, or Brussels.

We call all the workers organizations, parties of the Left, social movements of resistance and for emancipation all over the world, to mobilize urgently by all means (demonstrations, pickets, meetings, leafleting etc.) to stop the criminal military aggression against the people in Eastern-Southern Ukraine.

Particularly in Europe and the USA, we must not forget that the main enemy is at home: the same ruling classes in Europe and America  that want to transform  Ukraine and all the former Soviet space into their colonies already starve their own peoples by permanent 'austerity' and mass unemployment. We are all Ukrainians!

Let us make the coming May Day 2014 an International Day of Solidarity to the people of Ukraine against the dictatorial regime in Kiev and its masters in the West.

Let everybody hear our voice, the voice of the international working class:

No pasarán! Peace to the people- Power to the workers Councils!