Final resolution of the International Conference “Europe in crisis” 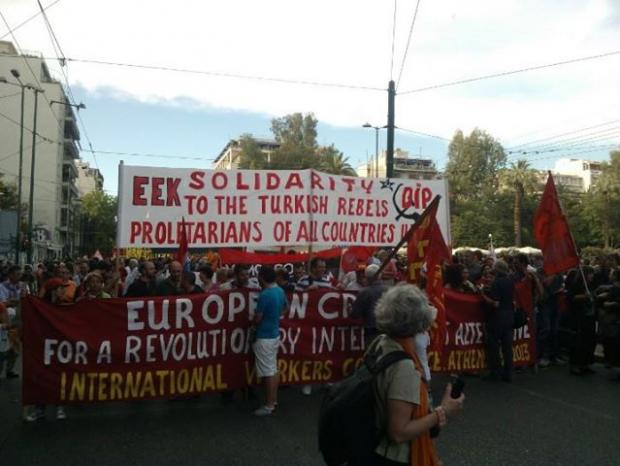 We, gathered in the International Workers Euro-Conference on June 9-10, in Athens, militants coming from twenty countries of Europe, West and East, North and South but also from the Middle East, Asia, Africa and Latina America, fighting in dozens of various political organizations and parties of the revolutionary and anti-capitalist left, of combative trade unions, of social movements, of collectivities of popular self-organized struggle, we call  the workers, unemployed, pauperized and social excluded masses in every country to join into a common struggle for an internationalist revolutionary way out from the social catastrophe  spread by the current world crisis of capitalism.

More than six years now, an unprecedented global crisis has engulfed the capitalist world. It is neither a sheer, regular cyclical crisis nor a disturbance due to the conjuncture but a universal, systemic, historic crisis posing the greatest challenges to the present and future of humanity. For all of us, oppressed and exploited, this is the moment of decision and struggle to take our destiny in our hands. It is not this or that demand, which is at stake, but our own life itself - the right for a life  of universal human emancipation, free from exploitation, oppression, humiliation of human beings by human beings.

Started at the center of global capitalism, the US, the crisis soon has put the European Union in its epicenter.

The capitalists, their governments, the EU, the ECB and the IMF  try to make the working people to pay for the bankruptcy of their own system of exploitation, destroying the lives, jobs, wages and pensions,  homes, rights of millions with the most barbaric – and totally inefficient- “austerity” programs of social cannibalism.

Despite all the differences of degree, form and tempo of development, the crisis hits Europe as a whole, South and North, West and East. It is not limited solely to the periphery or in Southern Europe. The bankruptcy of Greece was the prelude, showing what was following on continental and international levels.

The European common currency, the euro-zone and the entire project for an EU itself is facing the threat of disintegration, while the European peoples are threatened to be buried under the ruins of the “European edifice”, built so far on the rotten bases of capitalism.  The European ruling classes have failed to actualize their old dream to integrate the Continent to compete for world hegemony against their antagonists in the United States and in Asia.

Our road forward, for a real alternative in Europe, and a socialist way out from today’s nightmare of bankrupt capitalism, cannot be limited to form “a front of the poor South” against the “rich” North, even less a front of the poor of the South with the rich of the South together with Rajoy, Letta, Holland, Samaras, Anastasiadis, or Coelho against the poor of the North, the French or German workers or the poor of Husby in Stockholm. We need to forge a united revolutionary internationalist front of all the oppressed and deprived, all the wretched of the Earth, South and North, East and West, from Lisbon to Vladivostok in Europe, in the Mediterranean, the Middle East of the Spring of the peoples rebelling against all the tyrants, local dictators and foreign imperialists, a united internationalist force of resistance and emancipation covering the entire planet.

For those of us fighting in the EU, it is vital to avoid both “Europeanist” liberal or reformist illusions that this imperialist Union of bankers, and usurers, of big industrialists and corrupt crony politicians, this authoritarian, oppressive alliance of ruling elites that transform Europe into a vast precarious labor camp, could ever, particularly in this moment of its historic crisis, to be reformed into a “social and democratic Europe”. A Bastille is brought down, not reformed.

From the other side, “Euroskepticism” has always a bourgeois reactionary content, even if it uses a kind of left populist rhetoric. For an alternative way out from the crisis, it is not the change of a currency, from the euro to a (devalued) drachma or lira, or peseta etc. but the radical change of the social system itself, which is crucial. A nationalistic retreat into asphyxiating national borders, under the national rulers of the same bankrupt social system and under the control of national policemen, national generals or national jailers is not a real desirable or feasible alternative. Autarky, a reactionary Utopia (or rather dystopia) had led to disastrous tragedies in the ‘30s; in conditions of capitalist globalization is a catastrophic farce.  Such vision cannot but to promote racism, repression and discrimination, exacerbating the already infernal situation of migrant communities in Europe.

Today, poisonous nationalist populism, despite the differences of right or “left” colors,  and furthermore the nationalist Right and far right, even worst,  the dangerous openly Nazi formations, like the “Golden Dawn” in Greece or Jobbik in Hungary, show clearly a sinister road to barbarism produced by  the capitalist systemic impasse.

We have to cut with the internationalist sword the Gordian knot: we have to combine the struggle to break down this imperialist European Union of those brigands “above us”, the exploiters and oppressors, with the struggle for a socialist unification “from below” by a common struggle of all the workers and popular masses of the Continent, to establish what it was called in the revolutionary tradition of the oppressed, the United Socialist States of Europe.

To advance towards this strategic goal, it is urgently needed, for all those collectivities, movements, organizations, and fighters coming from different traditions and engaging in the class struggle and all struggles for emancipation to discuss, openly, collectively, in a non sectarian way, on European and international levels,   the main axes of a Program for a way out from the crisis and to start coordinating our struggles by elaborating and implementing a common Plan of actions and campaigns.

●   to fight back the international usurers, the dictatorship of the “markets”, of the banks and financial capital, by the cancellation of ALL the public debt that robs and crashes the lives of millions, and by the expropriation of the banks under working control

●   All the “austerity” plans of social cannibalism imposed by the EU, the ECB, the IMF and the capitalist governments have to be stopped immediately. The capitalist have to pay for the crisis of their system of exploitation, not the exploited! We have to fight to restore wages, pensions, and social rights of the working people according to the social needs, not for the profits of the few.

●   Against mass unemployment, precarious labor, pauperization and social exclusion we call to fight to forbid sackings, for distribution of the working hours among all workers. To the unemployed and for those seeking a job, provision of unemployment benefits until they have a job. Public works of infrastructure, which anyway are vital and urgently needed, have to be developed to create new jobs.

The barons of the big industry blackmail always the workers to accept more cuts of wages and jobs or they would close or  “de-localize” their factories abroad; our answer should be to occupy all factories that close or fire massively workers, to expropriate them, without compensation, making them to function again under workers control and workers management.

●   Against home evictions because of debts or cut of electricity or water  because of non-payment of the bills, against any privation or privatization of common goods, including health and education.

●   Against the destruction of the environment

●   For a resolute struggle against fascism, racism and discrimination of women, of sexual orientation, of all minorities! Defend the immigrants and all the communities of oppressed! Equal rights for all workers, independently of color, ethnic origin or religion! The workers and popular movements have to organize Workers Defense Guards against the fascist gangs and State repression.

●   For the dismantlement of the bourgeois State apparatus of repression, of NATO and all imperialist military bases and alliances- full solidarity to all anti-imperialist struggles of oppressed nations in Palestine, the Middle East, Asia, Africa and Latin America!

For all immediate vital demands of the working class and popular masses, our battle cry should be: Down with all capitalist governments! For workers governments and workers power! Down with the European Union of the imperialists! For the United Socialist States of Europe!