by The 3rd Euro-Mediterranean Conference
July 30, 2015 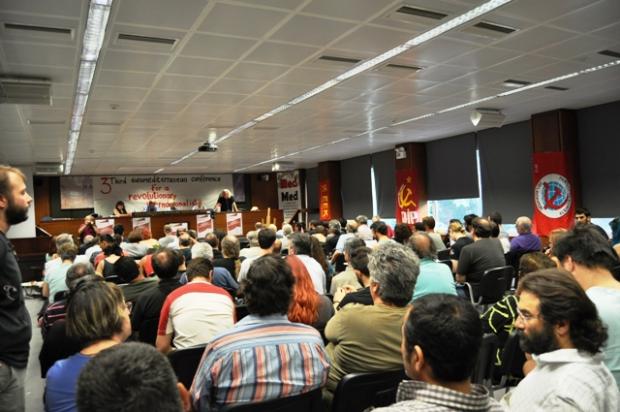 Solidarity to the people of Greece!

Down with the troika of the EU/ECB/IMF!

The capitalists should pay for the crisis of their system!

Break with the Tsipras leadership and its co-thinkers everywhere!

For an internationalist revolutionary solution to the crisis!

We, participants in the 3rd  Euro-Mediterranean Conference, convened in Athens, Greece by the Balkan Socialist Center “Christian Rakovsky” and the RedMed network on July 18-20, 2015, call the international working class and all the oppressed  all over the world to mobilize and express in action their solidarity with the Greek workers and popular masses under  continuous and escalating attack by the hated  imperialist troika of the European Union, the European Central Bank and the International Monetary Fund.

We denounce the new barbaric “bailout program” of social cannibalism imposed  on Greece by the troika  led by the CDU/SPD German government of Merkel/ Schäuble/Gabriel with the complicity of all the other European capitalist governments.

We salute the on-going heroic resistance of the Greek workers and poor, particularly of the young generation, manifested powerfully in the mass mobilization of July the 3rd and the triumph of the NO by 62 per cent of the vote in the Referendum against the blackmail of the imperialist “institutions” and the unprecedented campaign of intimidation by all media, nationally and internationally, and the closure of the Greek banks by the ECB.

We condemn unequivocally the betrayal of the popular will expressed in the victory of NO/OXI and the capitulation of the Tsipras coalition government of Syriza and ANEL by signing an even worse “austerity program”, condemned, politically and economically, to fail.

We stand by all the working class and popular forces, within and outside Syriza, in their rejection of the shameful pact of surrender to the gangsters of global capital turning Greece into a protectorate of the EU ruled by a government of the “willing” purged from all left opposition, undemocratic and hostage to the forces of bourgeois reaction, at home and abroad.

The dramatic escalation of the political and economic crisis in the Eurozone   centered on Greece marks a new stage in the global crisis of capitalism that erupted in 2007/08.

The feverish shifts of the situation and the sharp zigzags, right and left, manifest the abrupt deterioration of the crisis and the rapid acceleration of the confrontation between irreconcilable class forces. What we have experienced over the last month (and it is still continuing) is a total class war, ferociously waged by the imperialist EU, the ECB and the IMF against the impoverished Greek popular masses, as the first battle  against peoples all over Europe, east and west.

This political-financial coup d'Etat manifests clearly the imperialistic nature of the European Union and deepens the process of disintegration of the EU itself as well as of the declining bourgeois democracy.

Even the protagonist of this European counter-revolution, imperialist Germany, with the demonstration of all its extreme political and social sadism cannot be satisfied by or feel secure as a result of its Pyrrhic victory. Crushing a weak Greek prime minister ready to surrender is not the same as breaking the potential of social resistance or the fighting spirit of an oppressed but still proud, defiant and brave people, who quite recently humiliated the troika and the ruling classes in Greece and in Europe.

The head of the European Council Donald Tusk has summarized perfectly all the fears of the German and European bourgeoisie:

“The febrile rhetoric from far-left leaders, coupled with high youth unemployment in several countries, could be an explosive combination.

“For me, the atmosphere is a little similar to the time after 1968 in Europe,” he said.

“I can feel, maybe not a revolutionary mood, but something like widespread impatience. When impatience becomes not an individual but a social experience of feeling, this is the introduction for revolutions.” (Financial Times 17July 2015)

Signing a treaty of  capitulation by Tsipras, which is characterized  even by the German magazine Der Spiegel  as “a list of horrors” cannot be celebrated as  the “end of history”, particularly as we live  now  the end of the late “end of History” proclaimed by imperialism in 1991.  New and unexpected surprises are on the road.

The German bourgeoisie fully supported by Social Democracy “succeeded” to sharpen all the inter-imperialist rivalries within and outside Europe.

Outside Europe, it was expressed by, but not limited to the sharp conflict between the IMF and the EU-- actually between the US and Germany-- on the unsustainable Greek debt and the need for “debt relief”, although the IMF was, and is, even more than the EU, demanding the most draconian  austerity  in Greece. The Obama Administration has not hidden its fears for the “global systemic risk” (Jack Lew, US Secretary of the Treasury) involved in a Grexit, particularly with a US economy still struggling with crisis and preparing for a possible rise of its interest rates.

The updated report of the IMF, on July 14, after the forced “agreement” reached in Brussels, blowing it up actually by rejecting it as likely to increase the Greek debt to 200 per cent of GDP in 2018 and demanding a “30-year moratorium of payments to make it sustainable”, is a tremendous manifestation of the sharp conflict between Europe and America.

Within Europe, the hypocritical protests by Matteo Renzi in the Euro-Summit manifest the anxiety of over-indebted capitalist Italy to be the next target of Berlin.

The same applies, in a different form, to imperialist France. The old French-German axis of European capitalist integration based on the Maastricht Treaty of 1991, was broken long ago by the post-2008 crisis, as France has plunged into over-indebtedness, de-industrialization, and generalized social discontent. Although François Hollande and his (anti-)“socialist” neoliberal government have functioned as another instrument of imperialist pressure and blackmail on Greece, despite the illusions nurtured by Tsipras and Syriza, they had to take their distances at a certain point of the torture of the Greek delegation imposed by Schäuble, demanding a “temporary Grexit”.

The Euro as a common currency was from the beginning a project  advanced by the French bourgeoisie and Germany accepted it only reluctantly on the basis of its re-unification, taking advantage of a free-trade zone absolutely necessary to a basically export economy.   Now, the French saw Schäuble advancing aggressively a “Grexit” as a first step to the dismantling of monetary union itself, while keeping the EU as a free trade zone. Apparently, under the shocks of the world crisis and a new wave of world recession, Germany is going back to Schäuble's old plan for “a Europe of multiple speeds” around a hard core on the north of the Alps-- a German Europe unacceptable to its imperialist rivals. In such conditions, French government circles have spoken of the most  brutal clash in the last Euro-group and Euro-Summit meetings between French and German interests  for decades, namely since 1991, when Germany had promoted  the unilateral  separation of Croatia and Slovenia from Yugoslavia, opening the Pandora’s box.

Even the incident of Schäuble shouting at Mario Draghi of the ECB shows that tensions are rapidly building up and centrifugal forces are tearing apart the entire EU project. Wolfgang Münchau quite aptly titled his commentary in the Financial Times (3/7/15) “Greece's brutal creditors have demolished the eurozone project”.

Actually, it is the entire EU project that is facing the dynamics of dissolution. This project, after the epochal event of the demise of the Soviet Union in 1991, had as its strategic goal expansion into Central and Eastern Europe and the Balkans, the re-colonization of the entire former Soviet space, and thus the capitalist integration of Europe around the French-German axis to make the EU able to fight for hegemony in the chaotic post-Cold War world. Monetary unification of countries with very different and unequal social economic national structures was a necessary instrument of this strategy.

The implosion of finance capital globalization in 2007-2008 has brought to the surface all of the accumulated internal contradictions within this project and historical space, including all the flaws of the architecture of the Euro reflecting, in the last instance, the fundamental contradiction between the internationalization of the economy and the Nation-States, insoluble on capitalist bases.

In the Southern part of the EU and on its Eastern border, the Greek and Ukrainian tragedies are signaling the shipwreck of the grandiose project of European imperialism.

In every aspect, situated within the global picture, the Greek crisis reaching its climax now is the manifestation of a new stage that the world capitalist crisis is entering.

What next? What should the working class and the pauperized masses in Greece and in Europe do immediately in the escalating social warfare? That is the crucial question.

Overcoming the initial shock, confusion, and overwhelming feelings of betrayal by their leaders, feelings even of despair, the most combative contingents of the  proletariat in Greece should take the lead, but not alone: what is  more than ever needed  and  vital is the active  support and participation in a united  struggle of all sectors destroyed by the crisis and austerity in Greece and all over Europe, east and west, as well as in the wider region, first of all in the Balkans, former Soviet Union  countries, and the Middle East.  This is the message of this 3rd Euro-Mediterranean Conference.

The lessons of Greece have to be learned by the entire international workers and revolutionary movement, by all popular movements of the planet fighting for emancipation from imperialist capitalist barbarism.

To avoid defeat and capitulation, it becomes crystal clear that there is no reformist road to changing the imperialist European Union and its institutions. This iron cage of capital, this prison of the peoples has to be smashed by the mass mobilization of all the oppressed and it needs to be replaced by a real, socialist unification of the continent from Lisbon to Vladivostok.

To avoid defeat, to advance towards victory and social emancipation, it is clear that today there is no possibility for a class compromise with capital in crisis to “humanize capitalism”; there is no national, peaceful, parliamentary, reformist road for a way out of the social cannibalism of “austerity”- the only road forward is a united class front of the oppressed, organizing, social revolution, workers’ power without bureaucrats, and international Socialism.

We appeal to all those fighters against imperialism and capitalism, coming from different political traditions but uncompromising in their struggle against the exploiters and oppressors, all those who refuse to follow an accommodating Left sinking into hollow verbalism, abstract propagandism, electoralism, sectarian self-proclamation, or apolitical syndicalism: let us join ranks in a common international struggle to open a revolutionary way out of social disaster feeding despair but also strengthening state authoritarianism and brutality, the threat of  fascism, xenophobia, and all forms of racism.

We have to collectively elaborate a program of social liberation and a plan of action to organize and implement it. For our part, now more than ever, we passionately propose the following main lines:

Forward to world Socialism, for universal human emancipation, humanity without exploitation, oppression, humiliation of human beings by other human beings!