Appeal for International Solidarity from Revolutionary Metalworkers of Turkey 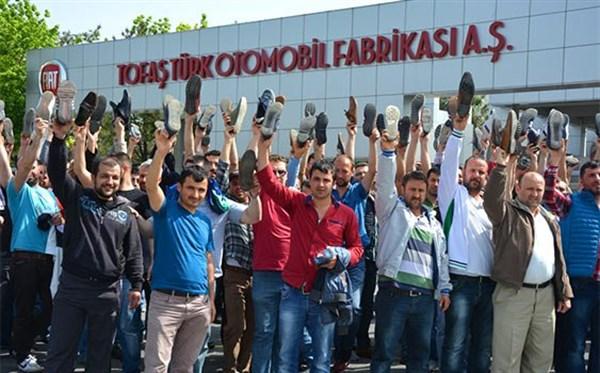 The metalworkers of Turkey are engaged in a revolt against the low-wage policy of their bosses, organised in the industry association MESS, and against the yellow gangster union Türk Metal in total collusion with the bosses’ organisation. The workers of Renault took the initiative by stopping work on 15th May. The workers of Tofaş, the manufacturer of Fiat cars in Turkey, followed suit the next day. This led to a wildfire of strikes in successive factories, including Magneti Marelli Mako, Ototrim, Türk Traktör, Ford Otosan, and Valeo. Workers at other companies in the metal industry are looking towards the movement as well. At the moment when these lines are being written, a total of way over 20 thousand workers have gone on strike and the action at Renault has already left a week behind. It should be emphasized that this is happening in a country where the right to strike has been constricted by the legislation promulgated under the military regime of the early 1980s and is strictly limited to disputes that arise in the collective negotiating process. This strike, on the other hand, has as its sole source of legitimacy the fighting spirit and the unity of the workers. Production has come to a complete halt in these companies, many of which are industrial giants. Moreover, the workers of the last shift to quit in each case have remained inside the factory, spending the nights there, thus bringing these actions close to strikes with occupation.

The top monopolistic capitalist group of Turkey, Koç Holding, is the main local partner of Fiat, Ford, and Magneti Morelli. Turkey is going through the most important workers’ struggle in the metal industry since the military coup of 1980. The metal industry is the top exporter in a country with a level of annual exports totalling 160 billion USD. Metalworkers thus find themselves in a centrally placed strategic position in the overall struggle of the working class in the country. Türk Metal, the yellow union against which the workers have now raised the banner of revolt, is the biggest union in the industry, with close to 140 thousand members, followed way behind by Birleşik Metal, with over 20 thousand members. The latter is affiliated to DİSK, a confederation that comes from a left-wing tradition, while Türk Metal is affiliated to the confederation Türk-İş, much more docile and pragmatic.

This recent struggle of the metalworkers against Türk Metal is not without precedent. In 1988 and again in 2011-12, there were waves of mass resignations from the union and efforts to sign up with Birleşik Metal. However, these efforts were largely frustrated. One should remember that Türk Metal has been the flagship of the new order set up in the early 1980s by the military regime. The confederation DİSK having been shut down by the junta and its leadership thrown in prison, Türk Metal was deliberately promoted into a position of dominance in the metal industry through the close collaboration of the military government and MESS, the bosses’ association. The reason for this well-thought out strategy on the part of the bourgeoisie can be found in the fact that in the period before the coup, a period of great working class militancy, the metalworkers’ union affiliated to DİSK (Maden-İş as it was called) was at the vanguard of the struggles. The military regime was established precisely to stop this wave of great workers’ struggles. Türk Metal was therefore designed to lull the metalworkers’ fight into lethargy. This yellow union is of the US style gangster type and is more akin to a subcontractor company specialised in providing cheap and docile labour to metal companies than to a veritable union.

In 2011, thousands of workers working for the multinational company Bosch abandoned Türk Metal to join Birleşik Metal. As a result of an acrimonious battle, involving a series of methods ranging from layoffs of the more vanguard workers to the beating of some workers by thugs employed by the union bureaucracy and the forging of documents on the part of the union with government complicity, many of these workers later had to resign from Birleşik Metal. There ensued a situation in which neither union had the legally necessary threshold of members to sign a collective contract. It was only this spring that Türk Metal found the requisite number and signed one with the company. However, because of the competition of Birleşik Metal, still enjoying some force in the workplace, this contract contained by far better terms than the group contract that was signed earlier between MESS and Türk Metal for companies that are now on strike. This rift created the crack through which gushed forth the movement. It lifted the lid of the repressed anger of the metalworkers against Türk Metal and triggered the present movement with a demand to have their wages raised to a par with the workers of Bosch. MESS and Türk Metal stood up against this demand in unison, which then started the movement of mass resignations from the yellow union. The physical assault orchestrated by the thugs of the bureaucracy against the workers in revolt only consolidated the movement. Türk Metal has seen large chunks of its membership drift away in a matter of days. In the end, the workers stopped work and refused to leave their workplace. They face the threat of mass layoffs and police repression in a country where both measures have been amply used in the past without any qualms.

The workers put forth three major demands: 1) Wage hikes to equal those granted to the workers of Bosch. 2) Expulsion of the yellow trade union Türk Metal from the factories and the recognition of the authority of the representatives designated by the workers in struggle themselves. 3) Assurance on the part of the bosses that there will be no punitive layoffs. They have not, at least for the moment, joined any other union, nor formed one themselves. They have designated representatives who act as their spokesmen and factory committees that lead the struggle and provide coordination between the different factories. The workers make ample use of social media and each factory has its own outlets of media. However, pages such as Metal İşçisinin Sesi (The Voice of the Metalworker), run by metalworkers who sympathise with the Revolutionary Workers’ Part (DIP), also serve as venues for communication, discussion and coordination of actions.

As a result of deliberate policies pursued by the bourgeoisie and the state since the early 1980s, the overwhelming majority of the metalworkers are totally alien to socialist ideas or left-wing movements. Most of these workers sympathise with the forces of the establishment. The political vanguard is restricted to a miniscule minority. Nationalist, even chauvinistic, ideas abound. But that is paradoxically why the creation of an international solidarity movement is so important, as it will open up a window for these workers to workers of other countries. This solidarity needs to go beyond official and symbolic acts of solidarity between unions (DİSK and metalworkers’ unions in other countries etc.) and involve instances of direct and immediate display of solidarity between workers of different countries and Turkey. This can only be organised through the efforts of the politically conscious vanguard of the workers. Methods abound: from minimal symbolic gestures such as the photographing or filming of brief displays of solidarity on the part of small groups of metalworkers of other countries holding signs that express solidarity in their hands, actions in front of Turkish diplomatic representations all the way to work stoppages, albeit brief, in the case of punitive layoffs or attempted police repression of strikers.

This type of solidarity will no doubt weaken the hold of nationalism within the ranks of the fighting metalworkers, but may as well contribute to the weakening of Islamophobia and extreme right-wing movements or outright fascism in the countries of Europe. We therefore call on you to make an effort of organising solidarity with the metalworkers in struggle.

Workers of all countries, unite!