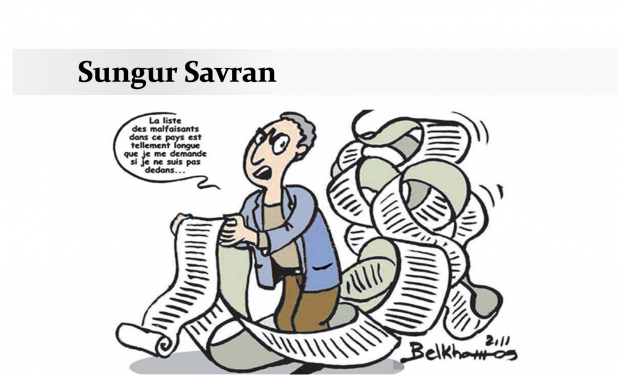 The article below was written in the immediate aftermath of the presidential onslaught on the parliament and the government of Tunisia on 25th July 2021. As the piece was written in Turkish, the process of translation by another of our comrades into English delayed publication. The subsequent events have only confirmed the initial analysis of the events presented here.

Marx’s reference to Hegel has been proven right once more: every historically significant event takes place twice – first as tragedy, then as farce! The Egyptian Revolution had ended in tragedy. It seems like the imperialist coup d’Etat in Tunisia will look like a caricature of its Egyptian counterpart in 2013.

The Arab Revolution of 2011 had received the biggest blow in 2013. When Muhammad Morsi, who had run as a Muslim Brotherhood (Ikhwan–al Muslimin) presidential candidate and won in the elections that took place a year after the revolution, began to greatly abuse his power, the revolutionary popular masses rose up once again on June 30th, 2013. 35 million Egyptians all around the country took it to the streets, thereby constituting the single greatest mass action in history thus far. The Chief of the Armed Forces General Abdel Fettah al-Sisi took advantage of the great blow this mass action dealt to Morsi’s prestige. Wriggling his way out of the equilibrium of the opposite Ikwhan and revolutionary camps, he was able to establish a Bonapartist dictatorship. This was a great tragedy. Since then, the Egyptian Revolution, the mightiest revolutionary upsurge of the 21st century, has been locked up in prisons. The worldwide revolutionary wave that had begun in 2011 receded, until it resumed in other countries in 2019.

The crushing or the conversion into reactionary civil wars of revolutions and pre-revolutionary revolts in other Arab countries accompanied the defeat of the Egyptian Revolution. Only the Tunisian Revolution proved to be able to avoid various traps on the road and institute a bourgeois democracy with some liberty. But this came at the cost of the European Union’s domestication of the revolution. The sources of the revolution, after all, were socio-economic, i.e. class-based. Yet imperialism confined the Tunisian Revolution into a purely political revolution. As socialists failed to mobilize the people around a radical program, political liberties remained as the only gain.

A fragile equilibrium established between the pro-imperialist old regime proponents and the Ikhwanist, pro-Qatari Ennahda Party kept determining the political dynamics of Tunisia from 2014 onwards. Up until, that is, this year, in which the country experienced the tenth anniversary of the revolution.

The balance kept shifting between the pro-imperialist secularists and the Ikhwanist movement, but the situation in the streets was completely different. The rage of the Tunisian poor, especially that of the walad –al khuma, that is the youth of the slums, was never satiated. Almost every year, the anniversary of the revolution witnessed revolts, as if in preparation of a renewed revolutionary onslaught. Especially this year witnessed a series of actions in which the revolution appeared to be re-emerging.

Yet even these actions couldn’t ease the struggle between the two counter-revolutionary camps, the pro-European and the pro-Qatari bourgeoisies. Another factor that widened the abyss between the two camps was the different positions they took on the ongoing civil war in neighboring Libya. The Ennahda and its leader Rashid Ghannouchi naturally supported the Ikhwani wing of the Libyan Civil War, while the independent president Kais Saied, along with France and a series of other Arab countries, was backing the opposite wing.

Yet the most delicate issue came forward when the Ennahda proposed to organize its own militia against the Tunisian people’s actions. This greatly panicked the pro-European bourgeoisie, as RedMed had explained at the time. Far from uniting them, therefore, revolutionary activity was tearing these two camps further apart from each other.

The independent Tunisian president Kais Saied’s decision on July 25th to shut down the parliament for a month and fire the prime minister and two other ministers by allegedly basing himself on an article in the constitution should be interpreted as a maneuver to resolve this contradiction in favor of imperialism and the pro-European bourgeoisie. Saied has killed two birds with one stone. He has both revoked all powers of Ghannouchi, the speaker of the parliament, and has forced the Prime Minister Hesham Meshishi, who has been working as a Ghannouchi ally, out of office.

The farce also entails a “light” version of the tragic scenario that had played itself out in Egypt. The reader will remember that a gigantic demonstration had taken place against the Ikhwani president right before the coup in Egypt. In Tunisia, July 25th is the national holiday to celebrate the country’s independence from the former colonial power France. On this day during daytime, sizeable crowds all over the country filled up squares defying the curfew imposed on the weekends due to Covid-19. They demonstrated the anger against both the government’s Covid-19 policy (the country is currently experiencing the greatest health crisis of Africa in proportion to its population; there are 18,000 daily cases in the country with the total population of 12,000,000; and the daily death rate is still in three-digit numbers) and its economic policy, which has led to a great crisis. In some places, Ennahda offices were attacked and damaged, and the party’s signs were taken down. Therefore, just as al-Sisi had posed as if he was responding to demands of the colossal protest that had taken place on June 30th, 2013, Kais Saied has pretended to respond to the popular struggle the masses waged against the Ennahda and its ally the Prime Minister on July 25th, 2021.

A section of the people sees this as a spontaneous movement developed through the social media from July 10th onwards. They call it the “July 25th Movement.” It is difficult not to suspect that it was more than a clever manipulation, in the sense that the president’s agents have probably at least contributed to the organization of the action. The fact that the police and the army did not intervene into any protest anywhere despite the curfew is also a significant indication.

Thus, what Tunisia is going through is a belated, civilian, and soft Bonapartism that has ridden the wave of popular struggle. Can we call it a coup?

The US State Department is conducting a legal investigation!

In a press conference called right after the parliament shutdown in Tunisia, the White House Spokesperson Jennifer Psaki replied to the question of whether what was happening can be called a coup by saying that the State Department is conducting a legal investigation into the issue. After almost a full week, the Department is yet to make a decision.

No need to hurry! The former Democratic President Barack Obama, the beloved poster-child for some, had also ordered the State Department to conduct an investigation into al-Sisi’s parliament shutdown, the imprisonment and the ensuing death by heart failure while in session in the court of the elected president to decide whether all this was a “coup”. These investigations are important, for a legal determination of “coup” would mean cancelling the near $1 billion annual aid to Egypt, the country that receives the single greatest US aid in the world after Israel. To the best of our knowledge, eight years later, the US State Department is still investigating the matter! How do we know that? Because al-Sisi keeps on receiving an annual aid of approximately $1 billion and spends it on silencing the opposition and stirring up the Arab world hand in hand with the Saudis.

Some sense of proportion is needed! If al-Sisi’s wasn’t a coup, then that of Kais Saied is surely not. Irony aside, a discussion on whether this is a coup or not would be a formalism worthy only of the AKP members and the left-liberals. The real importance lies not in what is going on at the moment, but whether Kais Saied will mobilize the army at the end of the month. The coup verdict can be given only then. There is nothing to gain from an empty legal discussion on Article 80 of the Tunisian constitution.

Yet this discussion demonstrates the final verdict of history with all its clarity on those who have been zealously howling that the entire Arab revolution was but “an American scheme” from its first day onwards and thereby have insulted the tens of millions of Tunisian and Egyptian (as well as from other nations) workers, poor, toilers, small shopkeepers, women, walad al-khuma, who have been heroically defending the revolution at the risk of their own lives.

If the Egyptian Revolution was an “American scheme”, then how come the Obama administration allowed the “revolution” it had so carefully prepared to be crushed? If the Tunisian Revolution was plotted by the former colonizer France from the get-go, then why on earth is the US State Department trying to stall the matter? Why isn’t France screaming for “democracy”?

Look what La Presse, a mouthpiece of the pro-European bourgeoisie, says in its editorial as it tries to pressure Kais Saied into taking immediate action: “Without a doubt it is very difficult not to frustrate the expectations of the democratic countries while satisfying the longings of the people”. That is to say: the people expect you to tear the Ennahda into pieces. But as you do that, don’t put the “democratic countries” in a difficult position. Give them a fig leaf that would enable them to call it a “legal” matter.

Those who cannot recognize the revolution when they see it aren’t worthy of being called Marxists or communists!

What Kais Saied will do is already becoming clear. For one, he wants to consolidate his popular support by cornering those capitalists who had made unlawful economic gains under the ancient old regime and hasn’t paid for their crimes. Second, he claims to have documents proving that the Ennahda and two other smaller parties have received money from shady and/or foreign (Qatar? Turkey?) sources during the 2019 elections. He thinks he will thus have the Ennahda cornered and force it to surrender. Third, he not only has shut down the parliament temporarily, but he has also abolished, without any legal basis whatsoever, parliamentary immunity for the deputies. Now the prominent leaders of the Ennahda, even perhaps the Speaker of the Parliament Ghannouchi himself, will face up accusations and charges that they won’t be able to get through for years.

In short, Kais Saied will attempt to end the Ennahda without violating the constitution, the parliament, or the principle of government based on a parliamentary majority. Can he? We don’t know yet.

What we do know is that the army and the police will have his back in case he can’t. That is to say, the “light” coup will turn into a hard one.

This development means another blow dealt to the AKP’s position in the Arab world. Al-Sisi overthrowing the Ikhwan in Egypt, the very partial success of the Ikhwan in Syria, the tendency within Hamas to collaborate with Iran winning the upper hand after the change of power in Egypt, the failure of the wing in Jordan to make any gains, the revolutionary overthrow and imprisonment of Omar al-Bashir in Sudan, the marginalization of the National Consensus Government in Libya – every single one of these series of events constituted a blow against Erdoğan’s Rabiist policies. Now, with the coup by Kais Saied, the last mighty partner with some share of power, the Ennahda and Ghannouchi, is forced to retreat into the defensive.

The future of Rabiism doesn’t appear to be very bright.