Stop the whitewashing of the murderous Saudi Kingdom, lackey of imperialism! 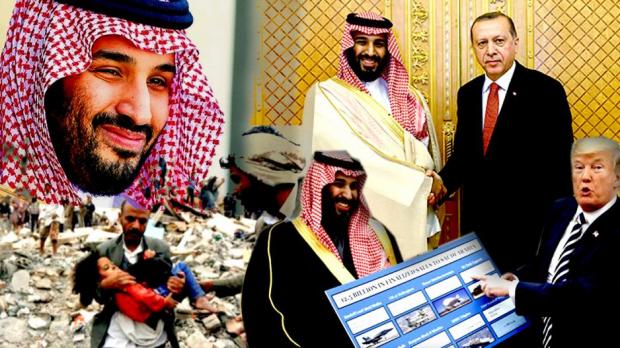 It has finally been admitted that Saudi journalist Jamal Khashoggi was killed in the Istanbul consulate of Saudi Arabia, where he was last seen entering. The announcement was made by the Saudi Press Agency, based on the declaration of Saudi officials. This confession of Saudi Arabia seeks to put the blame of this murder on some intelligence agents. 18 Saudi suspects are mentioned. There is no doubt that Crown Prince Mohammad bin Salman, who controls the whole military and intelligence apparatus and who eliminates his opponents by any means possible, is the instigator of this crime. And now they have found the way to cover up for him: “King Salman has ordered the restructuring of the intelligence agency.” And who will lead the committee in charge of this restructuring? Crown Prince Mohammad bin Salman himself!

They take the whole world for fools. They claim that Saudi officials went to Istanbul in order to meet Khashoggi, as there was a possibility for him to return to Saudi Arabia. The discussion between the two parties went sour, they claim, things escalated and Jamal Khashoggi was murdered. According to this grotesque scenario, all of this happened spontaneously. Apparently, Saudi Arabia includes forensic experts in all their delegations and equips them with bone saws, just in case, knowing that things can always take a turn for the worse!

While all this vileness is crystal clear, Trump declares that the Saudi investigation and statements are reliable. Clearly, not without a mention of the strong ties and alliance between the two countries, as in all statements made lately by the US administration.

There was no investigation since October 2nd, when Khashoggi was killed. Rather a scenario was plotted, written by the trio USA, Saudi Arabia and Turkey.

There are execution squads, forensic experts with bone saws, and intelligence agents in this scenario. Crown Prince Mohammed bin Salman looms as an éminence grise behind this team. In this incident we find assassins, a victim, blood, savagery and all you can imagine. All but a state! The incident happened in the consulate of a state, the perpetrators are officials of that state, there is a prince behind them, but since the beginning the state of Saudi Arabia has been kept out of the picture. To the extent that, the consul general of Saudi Arabia,  whose residence, according to reports, was used for the execution of Khashoggi, was able to return to his country a day before the investigation at his house. Free as a bird! There is no sign of tension in the relations with the Saudi state. Erdoğan and King Salman constantly talk over the phone and “exchange information”.

The position of the US is no different. Cordial relations between Trump and his son-in-law Kushner with Prince Salman are a well-known fact. The US media that is at loggerheads with Trump is more sensitive on the issue. Mohammed bin Salman receives a lot of criticism from the opposition media hostile to Trump (most notably the New York Times, the Washington Post and CNN International). However, still we see an effort of protection: they depict a portrait of a prince of a Middle-Eastern ally gone awry, not a bloodthirsty kingdom. Every representative of the US administration underlines the importance of the alliance and cooperation with Saudi Arabia, either at the end of the statement or between the lines. Trump says the following: “I spoke with the King, he was not aware”. He sends his Secretary of State Pompeo to Saudi Arabia. Pompeo returns after a “useful and fruitful” visit, in his own words. He also comes to Turkey to meet directly with Erdoğan and Foreign Minister Çavuşoğlu. Probably he has been made to listen to the audiotape of the murder as well, but the cordiality remains unscathed!

All this indicates that they seek to agree on a common scenario during this busy traffic between Washington, Riyadh and Ankara.

We should think about the almost systematic leaking of the creepiest details of the Khashoggi murder. This media effort is an essential part of the scenario they have built. Insistence on the murder alone and in all its savageness is a way to hide the crimes of Saudi Arabia.

The massacres perpetrated by Saudi Arabia in Yemen as the hitman of the USA, including civilians, women and children, routinised executions, beheadings, including the religious leader of Saudi Shiites Sheikh Nimr al Nimr and the very members of the Saudi royal family, sectarian takfiri organisations beheading people in Syria on Saudi money, acts of taking the Prime Ministers of other Arab countries hostage for weeks, forcing the masses of immigrant workers from Asian countries to conditions of slavery, imposition of Medieval conditions on women. All of these are concealed under a scenario of murder, which covers the whole frame.

This murder committed by some “over-zealous” intelligence agents who went over the top has now been solved as a result of an “appreciated” cooperation between the USA, Saudi Arabia and Turkey. Everybody is free to do business with this rich reactionary pole in the Middle East!

With this common scenario, Saudi Arabia and the Crown Prince in particular elude this predicament. At least he steals a serious amount of time to stall the whole world off with the nonsense of restructuring the intelligence service. The USA will continue to use the Saudis as a sub-contractor, first and foremost against Iran. The 110-billion-dollar-worth arms deal is safe and sound. Now the Saudis have less leverage to resist the pressure made by Trump for some time to lower the oil prices. This scenario is convenient for Erdoğan, too. Saudi Arabia, from whom he is trying to steal some limelight to lead the Sunni-Muslim world, is caught in a precarious position. For this reason, it might even be more convenient for Erdoğan to keep this fragile and beaten-up Crown Prince in power, whose fault is exposed.

Is the Crown Prince completely off the hook?

It might be too early to think that Mohammed bin Salman is completely off the hook. Because even if this person made quite an entrance on the scene with the help of Trump and Trump's son-in-law, things have changed somewhat. Just before the Khashoggi incident, Trump was complaining about the King of Saudi Arabia by saying that he “might not be there for two weeks without us”, that the USA “defends” them but in return “they take advantage of us by giving us high oil prices”.

The freedom of women to drive, organisation of WWE shows in the country and opening of movie theaters were marketed as Saudi Arabia espousing moderate Islam and Mohammad bin Salman being a reformist. This panorama took a huge blow after the arrest of female Saudi activists with Canadian citizenship and the ensuing diplomatic crisis.

Saudi Arabia is the most lucrative and loyal hitman of imperialism. Not only does she commit massacres for the interests of the USA and Israel, but she also pays for this, just like the 110 billion arms deal they signed with Trump. Therefore, US presidents adore this kingdom. However, this interest and affection are not shared by the people of the USA. 11 out of the 15 people who perpetrated the 9/11 attack were of Saudi citizens and last year a U.S. court passed a decision which paves the way for 9/11 victims to directly sue Saudi Arabia. Because of that, Trump's leeway is limited by the repercussions of the mischief of the Saudi Crown prince on the US public. The fate of the Crown Prince has the possibility of becoming a battlefield of internal struggle within the US government.

Even if the Crown Prince gets removed from office, this will happen, in all likelihood, later, by more discreet means. The fact of this vile murder, this atrocity being linked to the second in command of the Saudi state would hurt the state itself. Hence, no matter what decision is taken by his imperialist masters regarding the fate of the Crown Prince, the crimes of Saudi Arabia will not come to the fore.

Stop praising the “moderation of the Turkish government”

From Turkey's standpoint, the incident, in a nutshell, is as follows: the Saudi state was caught red-handed. The Turkish government has made no statements in order to corner its main competitor in the Sunni-Muslim world and obtain some concessions. But as a form of blackmail, it leaks the information regarding the murder, including the creepiest details. Therefore, it menaces that if the Saudi side were not to compromise on certain issues, it will publish more serious evidence, which will make Saudi Arabia lose face. And this is being praised by the Turkish bourgeois press as the “moderation of the Turkish government”. Hiding the murderers is acclaimed! The interest of the working and toiling people and the oppressed nations of Turkey and the Middle East lies in the overthrow of these reactionary oil-rich landlords, not in their survival!

The Trump administration and Israel, while both bending backwards to protect the Saudi state, the fulcrum of their alliance with the reactionary Sunni-Arab states against Iran, and Mohammed bin Salman, whom they have been marketing for two years, constantly tried to appease Turkey. They have succeeded and included Turkey in the writing of the common scenario. Turkey found itself at the service of this epicentre of reaction, even though she had problems with Saudi Arabia on several issues, particularly regarding the coup d'état of al-Sisi in Egypt and the embargo against Qatar. Under the aegis of imperialism and according to the interests of Zionism, all their accomplices have been united on a reactionary line.

We must break this reactionary chain under the aegis of imperialism and Zionism. For this purpose, we should never stop pursuing the case of the Khashoggi murder. The Turkish government must unveil all the information held by the institutions of the state. Reveal the Khashoggi case in its entirety! Do not protect the murderers, instigators and the murderous Saudi kingdom, lackey of imperialism and Zionism!