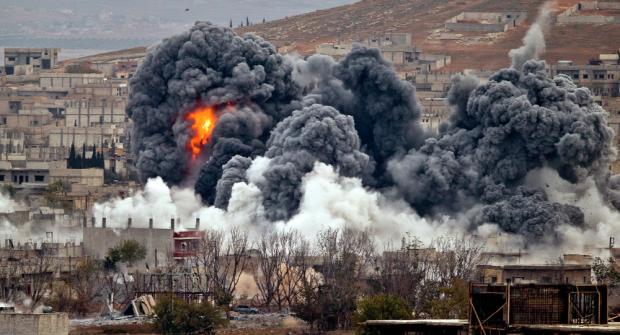 The following is a resolution adopted some days ago by our comrades from the Association of Marxist Units and the Russian Party of Communists. Although RedMed is in frank disagreement with the general orientation of the text and is discussing with our Russian comrades what really is the correct way forward, we are publishing their text in both Russian and English upon the request of our comrades and in an effort to make our discussion more transparent. The English translation has been made by our Russian comrades.

A series of acts of terrorism worldwide and war against Syria which is carried out by ISIL supported by Saudi Arabia, Qatar and Turkey with capitalist countries of the West behind them led by the USA again brought inadmissible close Europe and the whole world to the beginning of new world war. Situation is such that literally from each of those to whom the peace, safety and prosperity of people in each country are real and great values, have to make every effort immediately for restraint of those who pushes the people to a new world slaughter as the result of which the mankind could not survive. The military operation of Russia, the state of peripheral imperialism in Syria, has not only officially proclaimed purpose – to finish terrorist threat from ISIL, but also to strength its geopolitical interests in the Middle East region, to derivate of the Russian people attention from sharply worsening economic situation in the country. But today it is necessary to prevent the main threat which hung over mankind – the Third world war, way to which lies through terrorism and so-called local wars, other armed conflicts, including ones between the states.

Therefore we directly address to the governments of all countries and to the international organizations, and, first of all, to the UN which first of all are responsible for a preservation of peace and prevention of any military conflicts, and also to all thinking and responsible citizens in all countries: it is impossible further to hesitate and postpone a cardinal solution of the problem of terrorism and growth of race of arms, military strengthening of already existing military blocks. We offer and we demand, having rejected all momentary benefits and tactical interests, immediately, until the end of this year to begin process of development and acceptance of a package of measures which would be fixed by the relevant world agreement according to which any support of any kind of terrorism - military, technical, organizational and, the most important, - financial will be excluded, and also the punishment of any persons rendering in the past and continuing to give such support will be assumed.

We demand to resume also immediately negotiations on the termination of further race of arms and their fastest reduction, especially weapons of mass destruction, on creation of system of the world safety.

As the first step on this way we suggest to hold under the auspices of the UN the corresponding international conferences with participation of representatives of political and social movements of the different countries.

The answer which will be given to these our requirements, will show who and how ready to fight for eradication of terrorism and the termination of wars in practice. Therefore at the same time we address to all left and democratic organizations, to all citizens of the different countries with the offer also to hold such conferences, and to direct accepted documents to the governments, the UN and to extend through mass media. We have to take again a cause of peace in hand!