The Spanish State: A New Episode of the Political Crisis 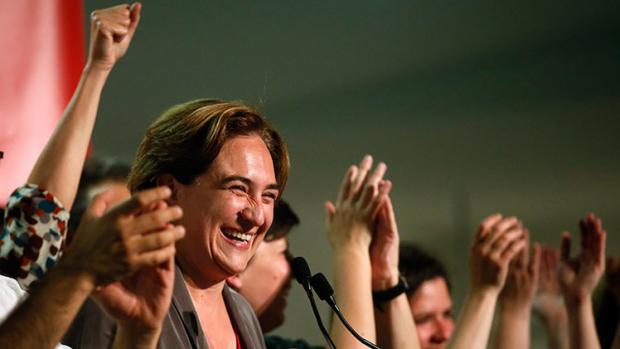 The results of the local and regional elections on 24 May entailed a new political earthquake in the Spanish state. The right-wing Partido Popular (the Popular Party, PP), in power with an absolute majority since the autumn of 2011, suffered a tremendous political blow: although it still has the lion’s share of the votes, it lost two and a half million votes and will lose, in all likelihood, the government of the important regions and cities. Thus, the remarkable decline of the two main parties, the PP and the social-democrat PSOE (the Spanish Socialist Workers’ Party) in  last year’s European Elections  has been confirmed (until then, the total vote of these parties was more than 70%, while now it is around 50%).

The slow unfolding of the political crisis has reached a new qualitative point. The ruling class, the state apparatus and the ruling party have tried to stop it in different ways: changing the head of state (i.e. the king), judicial containment of the pro-sovereignty process in Catalonia, controlling the media, ferocious repression of popular unrest. However, they are not succeeding in finding an adequate combination which would permit the stabilization of the regime. The political forces of the center-left and the left are moving forward, driven by the popular discontent and protest. However, this movement has still not managed to arm itself with instruments capable of challenging the political regime of the monarchy and the barbarity of capitalism as a whole.

The local elections were held in all municipalities of the country and the regional elections in all the main regions, except Andalusia, Catalonia, Galicia and the Basque Country.

The Partido Popular obtained six million votes (27%) in the local elections. However, it lost two and a half million votes compared to 2011 (37%). The percentage this time is similar to the one they got in the elections for the European Parliament in 2014. Without doubt there is an erosion in the ruling party, which brought it to the loss of the absolute majority in all regional parliaments and in most of the big cities, but it still has control over a number of entities, which is far from being insignificant.

Most of the votes lost by the right went to a party which, even if it is not new,  lacked a country-wide organization until a few months ago.  Ciudadanos (C’s, Citizens) was created in 2006 in Catalonia as a party of the “liberal center-left” and has since then managed to become part of the Catalan political system with an “anti-nationalist” discourse which attracted thousands of former voters of the Catalan socialists and of the right, especially in Barcelona and its metropolitan area. The expansion to the rest of Spain has been overtly propelled by sections of the bourgeoisie and the influential media. On the way, it has left the other small-scale party, Unión, Progreso y Democracia (UPyD-Union, Progress and Democracy), isolated, which was itself hoping to benefit from the crisis of the two big parties and constituted a potential for recourse for the political system in order to canalize the thirst for change in a direction which would legitimize the regime. Now, this role will be fulfilled by Ciudadanos, whose project, other than a regenerative rhetoric which can easily be absorbed by the ruling class, hardly differs at all from that of the right or of the social democrats. It obtained around 6.5 per cent of the vote in local elections and thus became the third political force, although one should remember that because Podemos participated in local elections as part of the unitary left lists, it is difficult to calculate the overall results it obtained over the country as a whole.

The Socialist Party (PSOE) also lost votes, even though to a lesser extent. It got 25% of the votes. (This was 28% in 2011 and 23% in the European Elections). Just like  social-democracy in other countries, the Spanish social-democracy is also facing a deep ideological crisis and is considered as another buttress of the regime, without a great deal of differences with the right, by millions of workers and young people. Since the emergence of Podemos, the PSOE has made a left turn, which did not convince, quite rightly, not just the active social left but also a large section of its potential voters in the working class. The collapse (similar to what happened to the Greek  PASOK) predicted by some is clearly not happening, with the social-democrats  maintaining a considerable base in trade unions, and, in spite of all evidence to the contrary, they are considered as the only plausible instrument to beat the right by millions of voters. This situation may change in the coming months; if an organizationally strengthened left can obtain some good results in the legislative elections this autumn, the PSOE can suffer a crushing defeat, with far-reaching results. The prospect of this possibility can be seen in big cities such as Madrid, Barcelona, Zaragoza, Cadiz or Corunna, where citizens’ platforms of the left have clearly outdone the PSOE. This party may win the municipalities in many cities and take power in various regional parliaments but only with the support of the left, Ciudadanos or nationalist parties.

In Catalonia, the party of President Artur Mas (CiU, Convergence and Union- center-right) has clearly been defeated. Although the electoral power of the partisans of sovereignty has not declined, CiU has been losing votes in each and every election. Actually, this is the exact reason of CiU’s constant electoral decline: the hesitations and compromises of the Catalan government is pushing separatist sectors to the center-left (ERC, Esquerra Republicana de Catalunya, Republican Left of Catalonia) and to the left (CUP, Candidatures d’Unitat Popular, Popular Unity Candidates). It is difficult to be sure that the early Catalan elections promised for this autumn will be held, given the decline in the political hegemony of CiU. The whole party system is changing quickly: the three parties which traditionally held the allegiance of the majority (CiU, the PSC – Catalan branch of the PSOE - and the PP) are losing strength to the benefit of ERC and CUP in the pro-independence camp and of C’s in the anti-sovereignty camp. As elsewhere in the country, in Catalonia there is a shift to the left, but even more marked, as might be seen from the results obtained by the citizens’ lists of the left (bringing together the mostly pro-federalist left, in favor of self-determination) in Barcelona and other big cities and also from the increase in the votes of CUP.

It is difficult to evaluate the results obtained by the left, since the local lists bring together parties with informal platforms and organizations with specific characteristics in each city.  These results are nonetheless of historic dimensions. Arguably, both in the autonomous regions and the municipalities, the left has obtained very good results where a broad agreement was reached. Podemos ran independently only in the regional elections and got some good results, but nothing close to the PP’s or the PSOE’s. It reached or came close to the 20 per cent level in only three autonomous regions and in the rest received between 8 and 15 per cent. Izquierda Unida (United Left, IU, dominated by the Communist Party) has been able to survive the emergence of Podemos in few places and is facing a grave crisis.  In local elections it received 4.7 per cent and lost its seats in various autonomous bodies. The supporters of the convergence of the whole left are gaining ground, but the wing which stands up for the autonomous existence of IU with a distinctive leftist identity is still strong (against the populist tactical maneuvers of Podemos, which refuses political debate in ideological terms).

In cities where “citizens’ lists” – the so-called “popular unity” – ran, the left, in alliance with the PSOE, can oust the right from power. Since its birth, Podemos insisted on including the PSOE in the “caste”, that is to say the political apparatus of the post-Francoist regime, instrument of the corrupt and predatory Spanish capitalism.  It stood for ousting the PSOE, in order to start a new constituent process and the “restoration” of democracy within the framework of the bourgeois state. It adopted a reformist project, which became even more moderate over the months. Now Podemos will have to revise its strategy and pass over to a vague stagism: if the priority – certainly felt by a majority of workers and the youth – is to defeat the right and put an end to its rule, Podemos will have to change its discourse and view the PSOE – so far a party of the “caste” to be fought – as an ally.  The inevitable compromises and the deepening of programmatic toning down cannot but lead to a frustration of the members and the electorate of the new party.

The candidates of “popular unity” adopted an emergency program against the crisis which included the defense of public services, the reversal of privatizations and measures for solving the problem of housing and unemployment. In the local and regional government, the left faces a crucial political dilemma. Where it wants to impose a program that will clash with the interests of capitalists and the state apparatus, it will either step up opposition together with the workers or it will accept the reality of bourgeois politics and its court system. One day after the elections, the Constitutional Tribunal cancelled a law enacted by the Andalusian Parliament (one of the few progressive measures that the IU snatched from the PSOE during its term of participation in the Andalusian government). This law opened the possibility of expropriating empty dwellings owned by banks. Clearly, this is a warning from the highest Spanish judicial authority. In addition to that, the crisis has reduced the revenue of local authorities. If they do not want to let popular hopes down, the fundamental decisions that the local governments of the left will have to take will depend on scarce resources and will be incompatible with  legislation at the level of the central state at the service of the interests of big business.

Thus, we are seeing the limits of “municipalism” and the impasse of the “democratic rupture”: without confronting the power of the capitalist class and its state, the basic demands of the working class, youth, the impoverished middle strata and petty-bourgeoisie cannot be satisfied. The shift to the left might then become a temporary episode and the regime might steer the political crisis into a reactionary alternative.

To prevent this from happening there is no other way than the creation of a movement against the monarchy, the vacuous parliamentary system and the assault on the standard of living, a movement that unites popular organisations, the youth in revolt, and the nascent oppostion tendencies within the trade unions. After one and a half years of its existence, it is clear that, with its course of toning down the demands and the questioning of the various aspects of the project that may lead to results that are unacceptable to the regime, Podemos cannot be the political instrument of this kind of necessary alternative. And this in spite of the hundreds of fighters that are part of the rank and file and are its best elements. These workers and youth should take their place in the construction of a revolutionary alternative of the workers and the people to the crisis of the regime and of capitalism. And of course, the thousands of people who vote for it, in addition to the left that has not entered Podemos. In the current period of belief in the unity of the left, of hope in a program of social emergency, this movement should declare clearly its mission and point to the limitations of Podemos. In the struggle and in the ballot box. And start building a real anti-capitalist alternative.