Solidarity with the workers of Haft Tapeh! 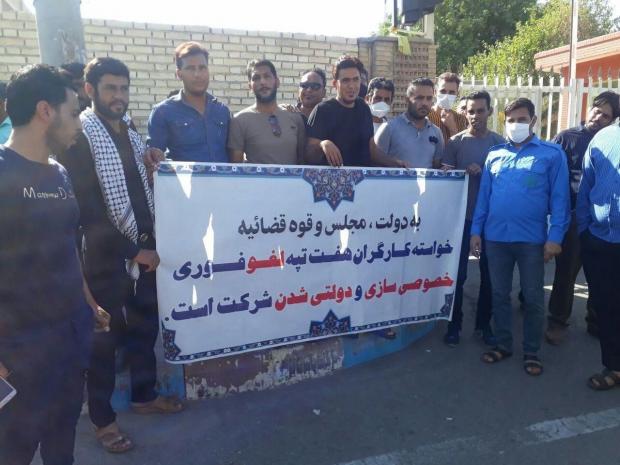 Today is the 52nd day of the workers’ strike at an agribusiness enterprise in Iran, Haft Tapeh. This historic strike is the culmination of years of struggle of these workers to stop privatizations and claim their rights. The Haft Tapeh union was first established during 1974-75 but the anti-worker policies and the slander by of the Islamic Republic concerning anti-revolutionary activity on the part of the workers eventually led to its banning, just like hundreds of other unions.

During 2005-2006, upon receiving the news of the privatization of this public enterprise the Haft Tapeh workers rose up against this in unison and rebuilt the union in 2007. The lead organizers were immediately held up by the police forces and other leading members of the union were arrested and barred from attending protests and other social events.

Yet despite all this repression, Haft Tapeh workers reignited the struggle against privatization and injustices once again in 2018. As a response, the union leader Ismail Bakhsi was arrested and forced to give “confessions” on national television.

Despite the hypocritical claim of the Islamic Republic to stand for the workers and the oppressed, it has been proven once more that they in fact stand for the bourgeoisie against the workers. The neoliberal policies of the regime push millions into poverty and violently repress their just struggles. And all these developments are completely ignored by the pro-regime media as well as the imperialist stooge opposition media.

There is no news about the demands and protestations of these workers on their 52nd day of strike, and the rare mentions about the workers at all only briefly touch the marches of the workers in Shush city, in a manner that misleads public opinion. The reason is clear! The right-wing opposition of the Islamic Republic is in fact in perfect agreement with the regime when it comes to their stance on privatizations which align with that of the World Bank and IMF. The only difference is the attempt by the right-wing opposition to conjure up a fallacious dichotomy of “good privatizations vs bad privatizations” so as to hide the devastating effects of these policies.

On the other hand, due to the extremely weak state of the Iranian left, the international left remains unaware of such important struggles. The main demands of this strike are: cancelling the privatization, reinstating the workers who were fired, stopping the police repression on workers’ organizations, payment of the overdue wages and other benefits and finally the organization of production under workers’ control.

These progressive demands are not covered by the mainstream media at all, and the working class militancy is reduced to subversion.

Meanwhile, the supposed alternative media in Europe and Northern America, and those other smaller media institutions who are pro-Russia, pro-China or even pro-Islamic Republic completely ignore this strike and resistance, or worse yet portray it as a subversive imperialist project.

Before our eyes, the working class is stubbornly and independently resisting the repression on a daily basis, and yet faces a complete blackout and censorship from all sides. It is as if all these “opposition” tendencies unite on a single point: to silence the voices of the working class and their militants.

Haft Tapeh workers do not receive any support from any organization or institution, they continue to resist and struggle with empty pockets and empty stomachs. To actively ignore these progressive vanguard workers amounts to supporting reaction and imperialism. Is the maxim of “Workers of all countries, unite” just an empty romantic phrase? Or is it the battle cry of workers in class struggle? Comrades, we call on you to be the voice of the Haft Tapeh workers and the Iranian working class all around the world in all languages.