On the referendum in Macedonia 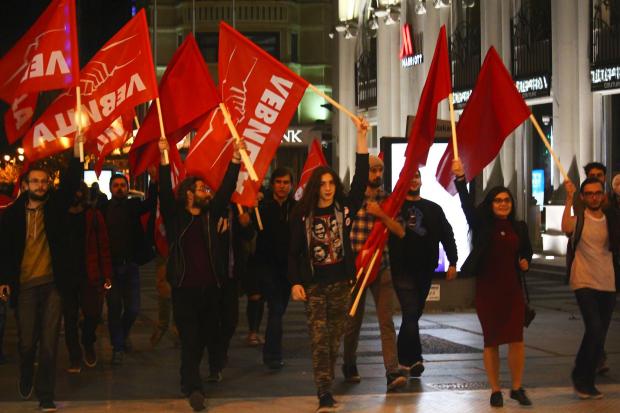 On the 30th of September, the people of one small peaceful country from the Balkan showed their resistance against the blackmailing politics of the biggest imperialist powers and their intervention to force their interests, the entrance of the Republic of Macedonia in the NATO alliance. On this day, Macedonians, Albanians, Turks, Vlachs, Serbs, Roma people, Bosnians and members of all other ethnicities in the republic - in solidarity through an organized massive boycott of the illegal referendum - demonstrated unity in the Resistance to Imperialism and the corrupt elites that were conducting these politics.Despite the strong efforts of worldwide politicians, such as the German chancellor Angela Merkel, the United States Secretary of Defense James Mattis, and the Austrian prime minister Sebastian Kurz, who visited our country last month, and the expensive and manipulative Government campaign for the alleged prosperity that our country would have in the NATO alliance, the resistance of the people against domestic and world corrupt politicians was not broken.At the end of the referendum, the results were clear - the voters’ turnout of 36% deemed the boycott campaign a huge success. Now, the Government is faced with a difficult situation. On the one hand, they have an enormous pressure from the Western imperialist forces to ratify the agreement by any means necessary, and on the other hand, the people’s rejection of the agreement is forcing making the Government’s obedience much more controversial. They have to either ignore the voice of the people and try to vote the agreement in the Parliament with the full knowledge that this could bring destabilisation, or risk to call for extraordinary elections in an effort to secure the parliamentary majority that they need.Despite the many interpretations of the result of the referendum, it is unsuccessful because it did not reach the required census of 50% - a statement that even the State Election Committee made. This, of course, did not stop the USA and the some of EU bureaucrats to hypocritically proclaim the referendum as successful as thus putting open pressure to the fragile Macedonian Government.Levica (The Left) is calling the Government to keep its given word and resign and the Parliament to call for extraordinary elections, because the result of the referendum shows, unequivocally and explicitly, what has been known throughout the entirety of this year: that this Government’s vision doesn’t coincide with the people’s will. Thus, the only democratical act left for the current Government is  to resign, to call for new parliamentary elections on which the people will elect a new Government that will represent the people’s will.Political party Levica from Republic of Macedonia