Rakovsky Center declaration on Bosnia: Solidarity with the workers and youth of Bosnia and Hercegovina! US and EU, hands off Bosnia! 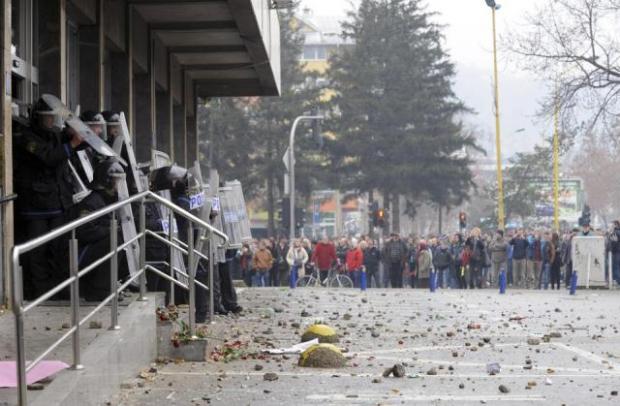 The Bosnian cauldron has finally exploded! In a country that was torn by internecine war only two decades ago and languishing since under a bloated and dysfunctional state structure established by the US imposed Dayton Accords of 1995, in a country where the rate of unemployment stands officially at 27.5 per cent, although other estimates put it closer to 45 per cent, and where joblessness among youth aged 18-29 soars officially at 57 per cent, it was only a matter of time for a social explosion to take place. The working class and youth of the city of Tuzla, an industrial heartland, took the initiative on 4 February and the uprising, at its sixth day now, has since spread like wildfire to almost the whole of the Federation of Bosnia and Hercegovina (BiH), with the capital Sarajevo and the major cities of Mostar, Bihac, and Zenica leading the way, as well as the neutral and autonomous Brčko District. The Republika Srpska, on the other hand, has hardly been touched yet.

This is class struggle at its purest! The insurrection in Tuzla started as a protest against closures of factories privatised between 2000 and 2008. A thriving industrial and cultural hub under the Socialist Federation of Yugoslavia, Tuzla saw its factories in the chemical, furniture and other industries plundered by the former bureaucracy in the form of privatisation. The new owners were really not even interested in the production surplus value! Having sold off assets, many then declared bankruptcy and laid off workers without compensation. The workers are owed wage arrears of up to 27 months and additionally demand both compensation for redundancy and healthcare and pension pay. Naturally, all these economic demands have faded into the background since the protests have turned into a veritable insurrection. In Tuzla, the government building of the local canton has been gutted. In Sarajevo, the demonstrators set the building of the Presidency of Bosnia and Hercegovina and the seat of the cantonal government on fire. The people have generalised their criticism of the regime, chanting “Thieves!” and raised the slogan of “Revolution!”, thus putting the question of political power on the agenda. However, the insurrection seems to be totally spontaneous and the workers and youth have yet to develop the organisational forms that may realistically pose an alternative to the existing power structure. On the other hand, in addition to the self-confidence that the destruction of government buildings has instilled in the workers, the struggle has also already attained some initial political triumphs in the form of the resignation of the heads of the Tuzla and Sarajevo cantons and of the whole government of the canton of Zenica-Doboj. Also some very important slogans have been put forward by the masses even at this early stage. In Tuzla, “down with the government!” has been common currency. The slogans for the protection of the right to work and for the abolition of the privileges of politicians, a large crowd due to the fragmented and cascaded nature of the state structures, are important. Perhaps most strikingly, the rebels of Bosnia call for the abolition of the imperialist Dayton Accords!

The most formidable difficulty for the mass movement comes from the internalised fears of a resurgence of the extreme violence and cruelty that visited Bosnia-Hercevogina in the civil war of the years 1992-1995 and the ensuing almost racistic hostility between the three major ethno-cultural-religious groups, in particular between the predominantly Muslim Bosniaks and the predominantly Christian Orthodox Serbs, with the Roman Catholic Croats standing nearer the Bosniaks. But there is good news on this front as well. An extremely important event has occurred in recent days, when several hundred demonstrators marched in Banja Luka, the seat of the government of the Republika Srpska, chanting slogans that appealed to “unity among all Bosnian ethnicities”. At the other end, in the Bosniak-Croat city of Mostar, the headquarters of the Muslim Bosniak SDA and of the Croat HDZ (Ustashe) parties were put on fire, showing that the masses have a clear tendency to break with nationalism or religious identity.Were this to prove to be the tendency of even a sizeable minority of the three peoples of BiH, this would bring great energy and potential to the impending revolutionary process in the country.

The imperialists have been playing a quasi-colonialist role in BiH since the signing of the Dayton Accords. Thus it is not fortuitous that the US Embassy in Sarajevo has issued a declaration, which, after paying some lip service to the demands of the people in revolt, flatly refuses all violence, including against the police force and, of course, government buildings. Given the brutality with which the Bosnian police handled the workers’ protests on the first days of the demonstrations in Tuzla, it is ironic to see this defence of the police force by the US government. Is it any coincidence that Stefan Füle, the EU Commissioner for Enlargement and European Neighbourhood Policy, also discouraged recourse to violence? No! Imperialism is very well aware that should the events take a more sustained course, a revolutionary situation will be born and are therefore warning the workers and youth of BiH that they will not permit a violent overthrow of the political system!

Coming in the heels of the overthrow of the Romanian government, of months-long ceaseless demonstrations in Bulgaria, of massive protests against economic conditions in Slovenia, of the 2008 revolt and the momentous class struggles of 2010-2013 against the Troika and successive governments in Greece and of the spectacular Gezi Park events, truly a people’s rebellion, in Turkey last summer, the uprising in BiH takes on an additional significance. The Balkans is rife with revolutionary fervour. It is the working class and youth of this unfortunate region that will reunite the multifarious spectrum of peoples in this geography in and through revolutionary activity!

Solidarity with the working class and youth of Bosnia and Hercegovina!

Down with the restorationist plunderer new bourgeoisie of Bosnia and the other former Yugoslav republics!

Power to the working people of Bosnia!

Forward to the Balkans Socialist Federation!

Forward to the United Socialist States of Europe!