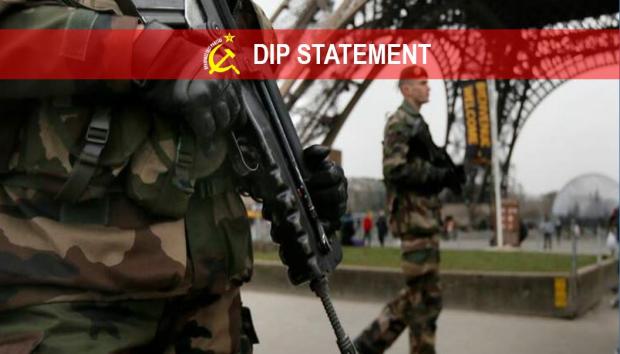 In France, 20 retired generals, as well as more than one thousand officers of other ranks, have published a pronunciamiento accusing the political leaders of the country, starting with the President of the Republic Emmanuel Macron and including members of the government as well as members of parliament not only for equivocation and laxism, but also “guilty silence”, warning of the inexorable intervention of their “active-duty comrades in a perilous mission” to save French civilisation, and threatening a “civil war in which deaths will be counted in the thousands, for which you [the political leaders of the country] will bear the responsibility”.

This is the ghost of the Organisation de l’Armée Secrète (OAS) of the time of the Algerian War. This is the spectre of the 1958 coup d’Etat. This is the echo of the preparation of the NATO army against the masses in 1968. This is the tradition of the French army.

As extremely serious as the pronunciamiento is, its significance rises two-fold when the first response comes from Marine Le Pen, the leader of the proto-fascist Rassemblement National (National Gathering, formerly Front National), a party that is the offspring of the gathering in 1972 of all the traditions of French fascism under Jean-Marie Le Pen, the father of the present leader of the party. Marine Le Pen, in responding to the generals, invites these people to join her in this struggle in the name of “democracy”, a “project of change of power that needs to be validated by the votes of the French”, with the objective of forming a “government of National Union”. These people are putschist generals that have just threatened a military intervention, a civil war, and thousands of deaths, but Marine Le Pen treats them as choir boys!

This is the second lightning bolt in 2021that illuminates the dire situation the advanced, imperialist capitalist countries are going through.  The storming of the US Congress building, the Capitol, on the 6th January, by paramilitary bands partisans of Donald Trump with the express purpose of preventing the confirmation by Congress of the presidency of Joseph Biden and of returning their hero Trump to the White House for a second term was the first warning.

In both countries, the threat of civil war goes hand in hand with the most abominable of racisms. In both countries, the forces that threaten the minorities (black, Latino/Latina, or native American in one, Maghrebin or from sub-Saharan Africa in the other), immigrants, Muslims, Jews and whatever other groups that can be picked on, lay the whole blame for the socio-economic plight of the working class and the peasants on the shoulders of those groups.

In both countries, the leaders that yearn for power and will join hands with any force that promises to exercise violence, the paramilitary bands in the case of Trump and the former military top brass in the case of Marine Le Pen, in order to take power pursue an extremely chauvinistic policy of putting their “nation” above all else.

So the third decade of the 21st century has opened with an immense challenge not seen since the Nazi and fascist scourge that brought Europe to the edge of the precipice of barbarism.

Let no one think for a moment that the threat posed by Trump and his paramilitary bands is over simply because they lost the first battle. And let everyone be ready for all the battles that are only now beginning in France and the rest of Europe.

The forces of the organised working class are the central counter-power that can stop, push back and, finally, defeat this rising wave of reaction.

Trade unions and the political forces that strive to organise the working class should join hands in a spirit of a workers’ united front to stand as a true barrier in the face of the rise of this reaction, these proto-fascist forces now on the threshold of turning into open and undisguised fascists forces.

It is around the working class that all anti-fascists, anti-racists, anti-militarists should organise. A working-class united front should not include those parties supposedly of the left, such as the Socialist Party and the EELV (Greens) in France, which are in fact parties of the prosperous modern petty-bourgeoisie siding with the capitalist system. It is they, first and foremost, who have moved the left away from the working class over to identity politics. This is what left the working class in all the advanced countries, without serious support from the left and thus made it possible for the proto-fascist forces to act as the saviors of the workers and the poor.

The putschist generals play the wolf in sheep’s skin when they talk about the Yellow Vests, who had to fight the security forces for more than a year. The side of the Yellow Vests is that of the working class. They share the same poverty, precarious conditions, and lack of public services as the workers. All those whose rights and existence are threatened by the putschist generals and Marine Le Pen, as well as Macron, all the oppressed and the youth, should join the ranks of the workers’ united front.