The people’s revolt proved larger than a court room! 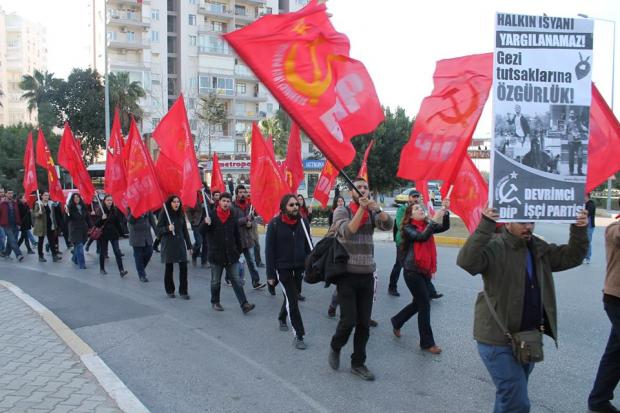 On Thursday 6 February, the court case involving Mustafa Cihan Yilmaz, a member of the Revolutionary Workers’ Party (DIP), opened in the Mediterranean city of Antalya in the South of Turkey. Our comrade Cihan was being tried along with several members of the Organisation of Socialist Youth, close to another tendency within the socialist movement, for their part in the demonstrations in Antalya in the course of the people’s revolt in Turkey last summer, better known under the name of Gezi Park. Cihan and two of his co-defendants had been kept in prison pending trial for four months. At the end of this first session, the court released Cihan and the other two. Not only this, but the entire manner in which the first session unfolded was a triumph for the people’s revolt and a major political victory for our party.

The DIP’s slogan was, from the very beginning of this case, “The people’s revolt cannot be judged!” This proved to be entirely true. The defence statement presented by both Mustafa Cihan Yilmaz and our lawyer Şiar Rişvanoğlu [Siar Risvanoglu], himself a founding member of our party, as well as those of the other defendants, were entirely political in nature, extremely outspoken in their defence of the people’s revolt and our party’s ultimate aim of bringing down the Erdogan government and replacing it with a workers’ government, and unapologetic in owning up the methods of physical self-defence employed by our comrades during the street battles.

Chronicle of a long day

The court hearing lasted for the full day of Thursday. However, the city of Antalya embraced the cause starting with a long march through the city in which many hundreds participated the evening before. The supporters of the rebels also organised a march the morning of the court hearing, chanting, “the people’s revolt cannot be judged!” and “rebellion, revolution, freedom!” in both Turkish and Kurdish. An outdoors mass press conference was held at the end of the march. The press release stressed that this case was really a proxy for the trial of the millions who participated in the revolt. Sungur Savran spoke on behalf of the DIP and contrasted the situation of Cihan with that of Bilal Erdogan, the young son of the prime minister who was summoned fully a month ago to the public prosecutor’s office for an investigation into a case of corruption he is involved in, but being above the law so to speak, has still not shown up for his statement to the prosecutor. Savran pointed out that cases such as that of Cihan and his co-defendants were really manufactured so that investigations into the corruption of the government would be stifled, since the government knows very well that a victorious popular revolt would immediately hold the government forces accountable for all such crimes and others. Apart from the scores of supporters in the court room, a large contingent of supporters kept guard outside the court house throughout the day for longer than 12 hours, vivaciously chanting slogans now and then and raising the banners of the organisations present. The DIP was the largest contingent, with militants from many parts of the country.

The court room itself was packed full with family and supporters of the defendants. This court is of the type that looks into cases of “terrorism”, which is the most ruthless type of court in the country. And yet the defendants and their lawyers managed to convert this court hearing into one where the government and the regime were themselves indicted and tried. The morning and early afternoon were taken by the statements of the defendants. The court then listened to the statements made by a qualified team of socialist lawyers. Although the statements deposed by the other defendants and their lawyers were political and of a high calibre as well, the statements made by our comrade Cihan and our lawyer Şiar Rişvanoğlu stood out among all the others by their political sharpness and outspokenness.

At the end of a long day, the court decided to release all three defendants that were being kept in prison so far. (There are other defendants in the trial, though not under arrest.) Coming after statements of an acerbic nature by the defendants and the lawyers in which no one minced their words, this release was itself an immense triumph. The defendants were then taken to the prison for formalities to be completed and finally released from prison after midnight. The DIP greeted Cihan and the others released in front of the prison to the chanting of The Internationale.

While all this was going on in Antalya, Turkey, in cities across Italy, Greece and the distant Argentina, contingents of the Partito Comunista dei Lavoratori (PCL), the Workers’ Revolutionary Party (EEK) and the Partido Obrero (PO), respectively, conducted protests in front of Turkish embassies and consulates. Most remarkably, the protest in front of the Turkish embassy in Buenos Aires, Argentina, involved two members of the Argentine Congress, Néstor Pitrola and Pablo López, selected on the ticket of the Frente de Izquierda, in which the PO is the leading force. Other sections of the Coordinating Committee for the Refoundation of the Fourth International, such as the Finnish MTL, sent in messages of solidarity. So the triumph was not solely due to the remarkable effort of the militants of the DIP, but very clearly to the contribution of our sister organisations as well.

The DIP as a whole made, from day one of the arrest of Cihan, the effort to wrest him from the clutch of the repressive forces of the bourgeoisie one of the priorities of its action during this period. This was meant not only to save our comrade, something important in itself, but also to protect the people’s revolt from the punitive counter assault of the bourgeoisie. That is why the major slogan adopted was: “the people’s revolt cannot be judged!” The party treated the case of Cihan on a regular basis in its literature and its web site, prepared materials (posters, stickers, postcards etc.) to publicise it, brought it to every international meeting in which the DIP participated, and started a financial campaign to meet the expenses of this whole effort. The results obtained paid handsomely for this effort.

The centrepiece of the victory was the defence statement read by Cihan during the hearing. The outstanding trait of this statement was the outspokenness of his characterisation of both the events in the summer of 2013 and his part in the events in Antalya. Cihan was very clear that this was a people’s uprising that involved three and a half million people according to the official figures of the Ministry of the Interior in 80 out of 81 provinces of Turkey. He also clearly put forth the politics of his party very clearly: The DIP tried to set up a bridge between the multifarious people’s revolt and the working class movement, to convince the Kurdish movement and people that joining the movement rather than sitting on the fence as the leadership tried to do was in their true interest, and to thus establish a much stronger alliance of forces that would bring down the Erdogan government and replace it with a workers’ and toilers’ government. He also stressed the irony of participants in the people’s revolt sitting in the defendant’s dock when court cases supposedly meaning to identify and punish the perpetrators of the six different cases of murder by the so-called security forces during the people’s revolt were left to languish in procedural complications. His sentence comparing their own situation with one of the victims of state repression, Ali Ismail Korkmaz, made the headlines in some papers: “Had we not run faster or avoided stumbling and falling, we probably would have met the same fate at the hands of the thugs of the government.” (Ali Ismail Korkmaz was murdered on a dark side street by a mixture of plainclothes cops and civilian thugs wielding batons with which they beat the young rebel to death.)

Cihan made no secret of his vanguard role in the Antalya events, either. He said: “The name of my party is the Revolutionary Workers’ Party. The Erdogan government has been attacking the rights and gains of the working class in the name of the interests of the bourgeoisie for a whole decade. So there is nothing more natural than that my party should join a popular revolt against this government to bring it down. That is why I was so active in the Antalya mobilisation.”

As for Şiar Rişvanoğlu, in a lawyer’s statement that fixated the whole courtroom audience, including the uninitiated gendarmes that were there to monitor the defendants, the party lawyer opened his salvo by saying that instead of these young rebels, Prime Minister Erdogan should have been sitting in the defence dock along with his ministers, provincial governors, and police chiefs, in short, the whole array of officials that are responsible for the death and maiming of scores of people and the injury suffered by thousands during the Gezi events. Rişvanoğlu also bluntly defended the physical defence action undertaken by the demonstrators in the face of the violent attacks by the police on the demonstrations, citing the importance of self-defence and de facto implementation of rights in the historical acquisition of those rights. Having amply explained the politics of the DIP during the Gezi events, he ended up by saying that rather than youth like Cihan, although they may be at the vanguard of the local action, the state should bring to trial, if such is its orientation, the leaders of the party, many of whom were of course present in the audience as he pointed out.

A courageous stand, a full victory

The DIP has thus taken a bold and outspoken revolutionary stance with respect to the situation in Turkey. It has done this in a case where one of its leading local comrades was a hostage in the hands of the state. And Cihan, the hostage, himself did not mince his words either about the objective situation or about the DIP’s politics. The result was, nonetheless, the release of Cihan and his co-defendants, which means victory on principled ground. International solidarity no doubt has also played its part here in obtaining this victory.

Turkey is going through an immensely deep political and economic crisis, tearing the state apparatus apart and creating what we at the DIP call a “crisis of the state”. Coupled with the unexhausted potential of the people’s revolt of last summer, this crisis promises to open up an immense opportunity in which a revolutionary party can intervene. The DIP has committed all its forces to this momentous task.