A new shameful crime: apartheid voted as the Basic Constitutional Law of Israel 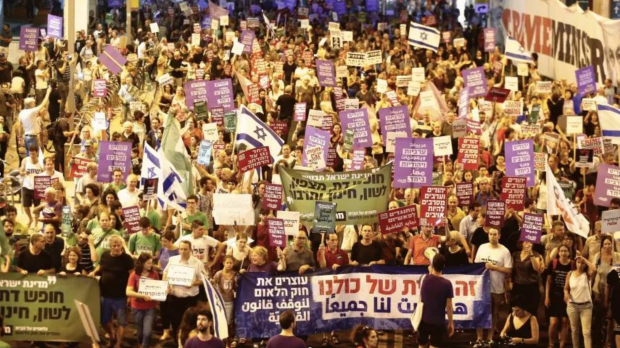 Today, July 19, 2018, early morning, the Israeli Knesset, the Parliament of the Zionist State controlled by the ruling far right coalition under Benjamin Netanyahu, passed by 62 votes against 55 and one abstention its apartheid “Nation-State of the Jewish People” Basic Law, abolishing even the “democratic” façade of the 1948 “Declaration of Independence of Israel”. Not only Arabic ceases to be an “official language” but a destructive blow is given to all the extremely restricted rights of the Palestinian Arab citizens of the occupied country. Segregation according to ethnicity and religion is established and “Jewish settlements” are praised and inaugurated as the State’s highest “national value”. But also the rights of the Israeli Jewish citizens, who do not conform to the so called “ultra-orthodox” distorted version of Judaism ordered by the corrupt rabbis supporting Netanyahu, are under immediate attack.

For this reason, on July 14, thousands of Israeli Jews have demonstrated in Tel Aviv against the new apartheid Basic Law (see photo above).

No people can be free when it oppresses another people! Zionism proved to be a catastrophe for the Palestinian people and a death trap for the Jewish people as well.  Netanyahu is the best friend of the worst anti-Semites. When the  new racist Basic Law was institutionalized, the Israeli Prime Minister received in his arms as a guest the notorious anti-Semite Hungarian Prime Minister Orban, the admirer of the Horthy dictatorship, responsible for the mass killing of half a million Hungarian Jews during  World War II.

Zionism and anti-Semitism are Siamese twins.

Down with barbarism, forward for a Socialist Federation of the Middle East!

Savas Michael is an anti-Zionist Greek Jew and the leader of the Workers Revolutionary Party (EEK) of Greece, one of the parties that support the web site RedMed