Mass destruction weapons sought in Iraq now discovered at Incirlik base in Turkey: Incirlik must immediately be cleansed of nuclear weapons and imperialist soldiers! 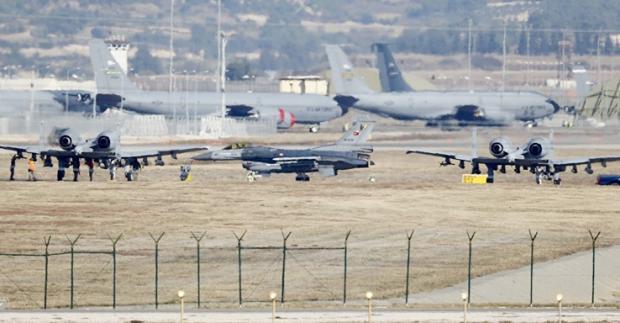 The article below was published in the September issue of Gerçek, the monthly central organ of DIP (Revolutionary Workers’ Party), translated by a comrade into English from its original Turkish.

The Incirlik military base is a scourge not only for the peoples of the region; imperialism has brought the biggest problems to the countries that have collaborated with it. In 1960, when the spy planes that took off from the Incirlik military base to spy on USSR were shot down, it was Turkey which faced the threat. The nuclear weapons that were installed in this base by the US brought Anatolia into the center of war threats both after this event and after the Cuban missile crisis.

After the July 15th coup attempt, the US nuclear weapons at Incirlik came to the fore once again. While the danger of confiscation of the nuclear weapons at Incirlik by the wrong hands during a future civil war was being debated by the US public, Deborah Lee James, the US Secretary of the Air Force reported that B61 Hydrogen Bombs, around 50 in number, are safe and that she has not been worrying about the future of these bombs. That was how we, the people of Turkey, learnt the truth which our own governments had not condescended to tell us; in other words, we learnt that there are at least 50 nuclear bombs that belong to the US on the territory we live in.

Along with this information is now confirmed the fact that the missile shield that was installed in Malatya is offensive, not defensive. This missile shield, which, at first, was announced as if it had been installed against a possible Iranian nuclear armament, clearly aims to block retaliation to any nuclear attack which might be launched by the US and Israel in the future.

We know that Iraq was invaded by the US and the UK justified by the mass destruction weapons whose trace has never been found and we know that since then more than 1 million Iraqi people have been killed. We have witnessed preparations of imperialist intervention in Syria for the same reason. Yet, the US now confesses that the real mass destruction weapons are stored at Incirlik. These weapons are as much a threat to the peoples of Turkey as they are to the peoples of the region.

The nuclear weapons at Incirlik are not a topic to be slurred over. Action must be taken immediately and the following precautions should be taken:

Turkey must leave NATO. All the agreements with the US must be torn immediately. The Incirlik base must be closed. The whole nuclear inventory at Incirlik must be inspected, recorded, and destroyed by an independent committee consisting of observers from, particularly, Iran and Iraq but also from the other regional states, from the representatives of the Palestinian people and open to every union and political party and independent of any imperialist formation including UN.