Let us demolish the Southeastern flank of NATO in order to prevent the consolidation of the Northeastern flank and stop the drift towards World War III! 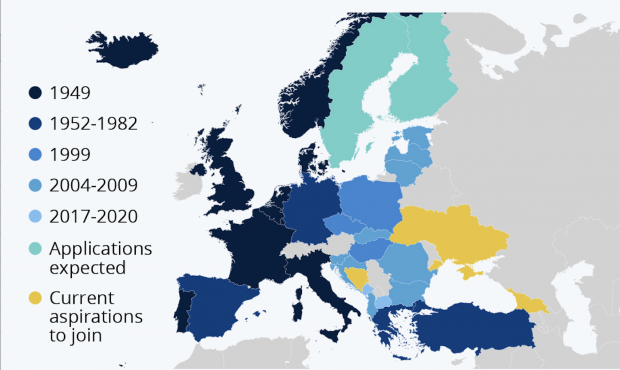 Let us demolish the Southeastern flank of NATO in order to prevent the consolidation of the Northeastern flank and stop the drift towards World War III!

To the Workers and the Oppressed of Turkey, Greece and Finland!

The insatiable drive of the imperialist-capitalist system for expansion, especially in the current conditions of a dramatically worsening global crisis, finds its mirror image in the unending efforts of NATO to extend its presence into ever newer countries. After the 14 countries of Central and Eastern Europe and the Balkans admitted between 1999 and 2020, it is now the turn of Sweden and Finland for accession to NATO!

This is an extension of the war in Ukraine, which has been presented to the world as a product of the ambition of Russia to expand its domination over the region. Putin himself has been demonized, even referred to as a Hitler, as have Saddam Hussein and Slobodan Miloševič before him.  Russia facing the dramatic effects of the collapse of the Soviet Union and of capitalist restoration continues to be the target of US imperialism’s plans for its fragmentation and colonization. This war is not the making of Russia.

The war in Ukraine is a proxy war that NATO is waging on Russia. We have said this from day one and now it is clear for the whole world to see. This war is being fought with NATO’s most advanced military equipment used by Ukrainian soldiers that had been trained, as admitted by NATO Secretary General Jens Stoltenberg, for years by NATO in their tens of thousands. The auxiliary forces are the neo-Nazis of the Azov Battalion and the so-called “voluntaries”. The imperialist West has spent tens of billions of dollars for this war in shorter than three months and Joseph Biden, president of the United States, is now planning to pass another bill of over 40 billion from Congress.

Not only has NATO provoked Russia into waging war in Ukraine but it has now become crystal clear that at least the US and Britain and NATO as an organisation want this war to drag on for months or even years! The NATO Secretary General said this after the Meeting of Foreign Ministers of NATO on 6-7 April. Mevlut Çavuşoğlu, Turkey’s Foreign Minister, revealed on television on 20th April that “some NATO countries wish this war to go on so as to weaken Russia”. US Minister of Defence Lloyd Austin, on visit to Ukraine on 25th April, said his country wishes to see the Russian army “weakened” by this war, and to “break the back of its military capacity”.

Workers of Greece, Turkey and Finland!

This is a crime against humanity! This attitude of having Ukrainians fight as gladiators the Russian army just because the imperialist West wishes to weaken and bring down on its knees Russia is also a crime against the civilian population of Ukraine. It is obviously a major crime that is being prepared against the peoples of Russia!

It is in this context that we need to situate the preparations to make Sweden and Finland members of NATO. This is pushing Russia once more to the corner. The accession of Ukraine to NATO was so disturbing for Russia because an eventual storing of nuclear weapons in that country neighbouring Russia implies that Moscow may be hit in minutes. Now the accession of Finland implies that exactly the same can be done to the second most important Russian city, St. Petersburg, formerly Leningrad. Moreover, given that Norway and Denmark have been members of NATO for decades and that the Baltic countries joined NATO in 2004, the entire Nordic world will now face Russia as potential enemies.

Sweden has adopted a neutral stance in international politics since the Napoleonic Wars. In other words, this is an abrupt change of a policy that has lasted for more than 200 years! Finland has had a very turbulent relationship with Russia under the Czars, the Soviet Union and the present period, but it remained, after the defeat of Nazism in World War II, neutral between the Soviet Union and NATO imperialism. Joining NATO now means to face insecurity, destabilization and war.

Workers and the oppressed of Finland and Sweden!

We need to fight this expansion of the imperialist war machine to new countries! This will put your countries under the immediate threat of war. Being on the frontline against Russia, the Swedish and in particular Finnish peoples will be fighting and dying for the interests of Wall Street and Pentagon and for those of the City of London and the British throne!

Moreover, because they will be frontline states in the imperialist drive to throttle and colonise Russia, NATO will no doubt establish in those countries the same type of undercover “counterinsurgency” organisations it has created in previously accepted NATO member countries, organisations that will specialize in hunting and atomizing all critics of the NATO system and its evil deeds.

Stop the expansion of NATO into Sweden and Finland!

Workers and the oppressed of Turkey and Greece!

Our two countries have fallen prey to the machinations of the NATO “special forces” and the “stay behind” policy of NATO, the counterpart of the infamous Gladio exposed in Italy as the Cold War was coming to an end. In Turkey all three successful military coups and interventions of the second half of the 20th century were the making of the “counterinsurgency services” of the army, surreptitiously organised by NATO. This was also true of all the political massacres and assassinations that killed, in their totality, thousands of working-class, socialist, Kurdish and Alevi oppositionists.

In Greece, imperialism and later NATO, were the main force behind the Civil War, the Colonels’ Junta, the Cyprus tragedy and all the other repressive measures and assassinations that have taken place since then. The US and British imperialism never have stopped to intervene, stirring the antagonisms between the Greek and Turkish capitalist classes, raising the danger of a reactionary war disastrous for both peoples in the Aegean and Eastern Mediterranean.  The recent US /Greek Treaty upgrading and extending ad infinitum the US military bases in Greece, voted only by the right-wing New Democracy ruling party deputies just before the trip of Prime Minister Kyriakos Mitsotakis to the US, transforms the country into one of the most advanced bastions of the imperialist war in Ukraine against Russia and all the peoples of the region.

Let us then fight NATO in order to dismantle the so-called “Southeastern flank” just at the moment when NATO is consolidating a monobloc “Northeastern flank”. Let us fight to take our countries, the supposedly enemy countries of Greece and Turkey, whose peoples have one of the most fraternal relationships between any two neighbouring countries in the world, out of NATO!

Greece and Turkey out of NATO!

Workers and the oppressed of all countries!

Stop this mad race of the imperialists towards a new world war!

Fight to overthrow imperialist capitalism! Only proletarian internationalism and Socialism will defeat the war and bring peace!

Forward for a world where workers of all countries are in command and embrace each other in peace, stability and economic unity and cooperation!