Jordan: the people’s revolt brings down a government! 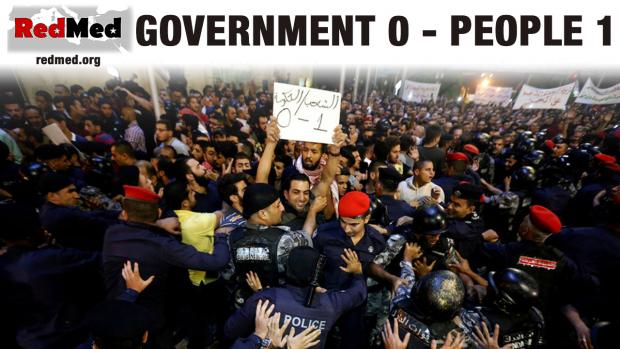 Jordan has joined the list of countries where the people no longer content themselves with the crumbs offered by parliamentary window-dressing, but walk out onto the streets in their thousands and tens of thousands in order to create better conditions of living for the working population. Mass demonstrations were staged in the so-called Fourth District of Amman where the seat of the Prime Minister is and in provincial cities such as Irbid, Tafila, El Kerak, Er Ramsa and Maan every evening from 31 May all the way to 7 June. The movement scored some successes, the most spectacular being the virtual sacking of the government of Hani Mulki, the freezing of fuel price hikes and later the withdrawal of the controversial tax bill that was perhaps the major bone of contention. As a result of these concessions and the overall flexible attitude of the higher echelons of the state, including the King, the demonstrations were finally called off on 8 June.

The movement was triggered by the general strike called for Wednesday 30 May by fully 33 organisations, headed by the strong professional organisations of Jordan such as those of doctors, teachers, lawyers, and journalists, extending to the trade unions as well. The target of the mass movement was the tax law that was sent by the government to parliament on 21 May.  Actually, the public had been uneasy with the economic policy of the Mulki government since it had accepted an austerity budget at the beginning of the year, lifting subsidies on bread and imposing a sales tax on essential goods

The next day, Thursday 31 May, in what seems to be an entirely spontaneous eruption, thousands of people came out to start protesting the raising of the price of fuel. The mere fact that as opposed to the professional organisations for which taxes are more important because their members by definition have jobs, the spontaneous movement adopted the fuel price hike as the main target implies that it was the poorer strata of society that headed the mass actions. The majority of the participants were composed of young people, but the main target of the protests was clearly economic. Moreover, the tax law as well as other measures that were unpopular with the masses were the result of an agreement with the IMF that has been implemented since mid-2016. Hence everything points to a class basis with a working class component joining hands with the modern wing of the petty-bourgeoisie, but the jobless and urban poor coming in on their own. For good reason: Unemployment stands at a staggering 18% while 20% of the population lives under the poverty line. While the population cannot make ends meet, government debt has increased to reach almost 40 billion US dollars, corresponding to more than 90% of GDP. Caught in the web of the IMF, the Jordanian government predictably took unpopular measures, but in this instance had to face insurmountable resistance. All commentators concur that this week of protests is unprecedented in Jordanian history. Thus, the fall of the government was almost inevitable.

As head of the executive, King Abdullah II took what seems a very clever position from day one. However, this policy may turn on him and the entire political system in the medium term. It was he who intervened early on, ordering the government to freeze the rise in the price of fuel.  He also criticised the government for not heeding the worries of the population regarding the IMF-imposed tax law, asserting that it was inequitable to expect ordinary people to bear the burden of the necessary readjustment of the economy, a most unusual statement coming from a top leader of a bourgeois executive. It was probably on the force of these positive openings by the King that the police took an extremely careful attitude vis-a-vis the demonstrators, preventing them from reaching the prime minister’s office, but doing this with great care so as not to cause excessive violence. In the end, it was the King who asked to see Prime Minister Mulki on 4 June and is believed to “ask him for his resignation”, which is but a polite way of sacking him and his government. After Mulki turned in his resignation, the king declared that he had always stood by his people and will always do so.

Empty rhetoric that aimed at putting out a wildfire that was unprecedented in the history of this small but important kingdom of the Middle East, an indispensible ally of the US and one of the very few Arab countries that recognises Zionist Israel. This policy of the King will probably backfire in the medium term, since the fundamental problems besetting the Jordanian economy and society remain as urgent as before. The attempt of the previous government, aided and abetted by the IMF, to lay the burden of the impasse of Jordanian capitalism, sharpened by the influx of Syrian refugees on a mass scale, on the shoulders of the working people of the country has now been defeated under the pressure of the masses. Not only was the tax law practically withdrawn by the new Prime Minister designate, Omar Razzaz, but the indirect taxes on essential goods have also been brought back on the agenda for discussion, while the price rise in fuel had already been frozen by the King’s order from the first day. Where will the new government find the money to keep up its expenditure except by borrowing? Borrowing itself will raise further the ratio of the public debt to GDP to levels even higher than the close to 100 % that it has currently reached, which was originally a major part of the problem which the tax bill tried to solve.

The King was also assisted by the two chambers of parliament in his fire fighting endeavour. The Speaker of the Chamber of Deputies and the President of the Senate both promised majorities that would reject the tax bill once it reached parliament. And in the absence of a credible prime minister, it fell to the Speaker of the Chamber of Deputies to convince the so-called “business community” and the bankers to the necessity of foregoing (naturally temporarily) the measures imposed by the IMF.

Even the IMF “welcomed” the King’s efforts to “establish a national dialogue” as a “very positive step forward.” However, the spokesperson for the IMF added that notwithstanding the necessity to distribute the burdens of readjustment equitably,             “reforms that enhance the business environment and reduce the cost of formal jobs, particularly for youth and women” were indispensible. In other words, the IMF is really telling the Jordanian authorities to circle the square!

All this has made the Jordanian state machinery to overcome the threat posed by the mass movement, but will in all probability come back to haunt the political cadres of the bourgeoisie once the financial and economic crisis comes home to roost.

Where does the movement stand?

There is no doubt that the demonstrations in Amman and other cities came nowhere near the revolutionary mood and action of the Tunisian and Egyptian masses in 2011, the two foremost instances of the spectacular revolutionary wave that shook the Arab world between 2011-2013. It is more akin to the popular rebellions of the kind one had, for instance, in Turkey and Brazil in 2013. The movement was nonetheless a real challenge to the existing order of things in a country where the parliament is more a façade than a powerful reality and where democratic traditions are almost non-existent. The Jordanian masses have now tasted the feeling of victory over a government, having brought one down in the space of less than a week. Perhaps even more importantly, the almost leaderless movement persisted in demonstrating even after the government fell. This is remarkable, since during the first five days, the central demand was the sacking of the government. This central watch word was instantly altered to that demanding the dissolution of parliament. This is reminiscent of the Armenian masses demanding the resignation of prime minister Serge Sergsyan, only to raise the bar to a demand for his whole party, the Republican Party, to go as soon as he withdrew.

The Jordanian movement is best characterised as a low-intensity popular rebellion, with Jordanian youth clearly taking after the antecedent movements of 2011-2013, not only in the Arab world but also in the Mediterranean countries of Europe, especially in Spain and Greece. One need only see how the demonstrators in Amman raised their hands with a gesture identically reminiscent of those of the Plaza del Sol in Madrid and Syndagma Square in Athens!

However, there was, according to all appearances, almost a total vacuum of organisational forms, either previously existing or created on the spur of the moment. As serious as this organisational limitation, everything that appeared in the press suggests that the youth lack any serious criticism of the existing system, either in its fuller capitalistic form or at least as regards the political system itself.

Nonetheless, this sort of experience is never lived in vain and it is to be expected that at least a minority of the masses that joined the movement will be positively politicised in the medium term. It is up to the socialists of Jordan and of the wider Arab world to address the organisational, political and ideological self-searching that may result especially among the youth from this experience. This is all the more urgent since the Islamists of the Arab world, from the Ikhwan (Muslim Brotherhood) to the Wahabbites (the official sect of the Saudi Kingdom), are always ready to prey on such experiences.

Finally, it is important to point out that Jordan is the sixth country to develop a mass movement of revolt against the economic and political conditions currently existing. This is what we had written in the immediate aftermath of the rebellion in Armenia in April and May:

“The Armenian uprising is the fifth such people’s mass movement since the beginning of 2018, in other words in the last five months. The year opened with Iran, a neighbour of Armenia. The fire then spread to Tunisia. Next in line was Romania, reacting against corruption. Then came Slovakia, in response to the killing of a journalist and his girl friend. And now Armenia.”

It needs to be added that between the writing of the above passage in mid-May, Iranian teamsters (truck drivers) staged a very widespread and powerful strike that won some gains, after a teachers’ strike in mid-May which was ferociously repressed. So the Iran masses have not lost their vitality. The experience of popular mass movements lives on, only to surface again when it finds the appropriate conditions.

After Iran, Tunisia, Slovakia, Romania, and Armenia, Jordan has now joined the host of countries where a mass rebellion erupted in the course of the first six months of 2018. All of these countries are placed towards the centre of the Eurasian land mass, i.e. central and east Europe, the Middle East and North Africa, the Caucasus, and the Mediterranean basin. This is the epicentre of the earlier revolutionary wave of 2011-2013. There can be no doubt that we have not left behind that revolutionary wave. In Western countries the tendency of the masses to struggle has taken parliamentary forms (Sanders, Corbyn, Podemos, Mélenchon, Syriza, United Left in Portugal, IRA in Ireland etc.), but in countries where the political system is less receptive to the mood of the masses partial and brief episodes of mass eruption point to the surreptitious burning of the flame. The mythical mole of Karl Marx is digging and digging.