International letter in solidarity with FIT-U 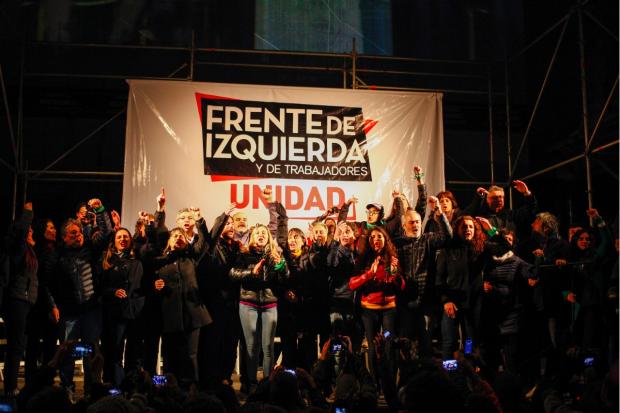 Dear Comrades of the FIT-Unidad,

We are writing to you to express our support to the Frente de la Izquierda y de los Trajabadores-Unidad (FIT-U or the Front of the Left and Workers-Unity), composed by four different revolutionary and socialist parties, in the elections to be held in Argentina on the 27th October 2019.

We are very much aware that your country is in the grip of a very deep economic crisis, the most profound in the capitalist world at this moment, even possibly at the threshold of a default. We are bitterly aware that a part of the working class, in particular the unemployed, the poor and the destitute of Argentina are facing starkly the prospect of hunger. This is almost a repeat of the crisis of the early years of this century that the workers and labourers of Argentina countered with the glorious Argentinazo of 2001-2002. And yet the major choices put before the people of Argentina in the coming elections are the two forces that have governed the country since that infamous crisis. On the one hand, Mauricio Macri under the command of the IMF and Trump, and, on the other, the Peronist ex-president Cristina Fernández Kirchner and her front man Alberto Fernández, facing Macri as candidate for president. The same bourgeois forces perpetually drag the people of Argentina to the brink of economic ruin and disaster.

We are proudly aware also that the working masses of Argentina are replying to this scandalous situation by fighting with all their energy. We know that there is a rise in workers’ struggles, be it the mighty piquetero movement of the unemployed, the resistance of workers of factories that are closing down, the state workers of Chubut in Patagonia and still others. We support these struggles in an internationalist spirit, knowing full well that the interest of the working class is one all around the world. It is in this context of class struggle that we see the elections themselves. We see the electoral struggle of the Frente de la Izquierda y de los Trajabadores-Unidad (FIT-U or the Front of the Left and Workers-Unity) as another arena where the independence of the working class from the political forces of the bourgeoisie can be fought for. We regard the results that the FIT-U, the only credible socialist alternative in the elections, the only force on the left that has been able to pass the test of the primaries on 11th August, will receive at the elections as a measure of the strength of the forces of the working class that will take up the struggles in the workplaces, on the squares, in the poor neighbourhoods, at schools once the elections are over. We therefore support your efforts with internationalist conviction.

We are all aware that the crisis in Argentina is part and parcel of the deep economic crisis of world capitalism that started in September 2008, but has not been resolved yet. We are also aware that this profound economic crisis of world capitalism is but the manifestation of the historic decline of capitalism, with the socialisation and the consequent internationalisation of the productive forces crying out for democratic central planning on the world scale while capitalist private property erects an insuperable barrier in the way of this solution.

Hence the threat of world war once again looming on the horizon of humanity, with imperialism feeling the dire need of bringing the newly rising world powers China and Russia on their knees. Hence the gravity of the ecological disaster that is visiting our planet, insoluble under the conditions of capital exploiting nature as it does labour, whatever shows “green capitalism” puts on through the United Nations. Hence, perhaps most importantly, the resurfacing of the barbaric tendencies of finance capital, the long-dormant fascism of the veritable kind, in the form of governments and movements that try to pit nation against nation, religion against religion, native against migrant so as to divert the attention of the workers of the world from the failures and cruelties of the capitalist system itself and from the obscene wealth of the rulers of this world.

But luckily these are not the only powerful tendencies in today’s world. In the face of these retrograde and barbaric tendencies created by 21st century capitalism, the working masses have also risen in hope and aspiration for a better world in a whole series of popular rebellions and revolutions around the world. The Arab revolutions of between 2011-2013, the mass mobilisations from Greece and Spain to Turkey and the Balkans in the same period, the Occupy Wall Street movement in the US, spreading beyond New York City to 50 plus locations, and the Brazilian protests of 2013 in 600 cities were all, despite the inevitable specificity of each incident, the expression of the same tendency to revolt against the bankruptcy of capitalism.

The al Sisi coup d’Etat in Egypt in 2013 created a reprieve. Even then the masses sought parliamentary solutions to their problems wherever they could, from Bernie Sanders and Jeremy Corbyn in the Anglo-American world to Syriza, Podemos, the Left Bloc in Portugal all the way to the victory of López Obrador in Mexico. But the tide has turned once again from parliamentary methods to that of revolt and revolution. The Arab world is again in ebullition, with popular rebellions in Jordan, Tunisia and Iraq in 2018 (not to mention non-Arab Iran) and the ongoing revolutions of Sudan and Algeria currently. The masses have started testing the limits once again even in Egypt, where the repression reaches inconceivable proportions. The Iraqi people have heroically been on the streets for a week at the moment of writing, despite the fact that more than 100 people have been martyred in this popular rebellion against the “democracy” established by American imperialism. Lebanon is the last on the list. On your continent Puerto Rico, Haiti and Ecuador have recently all been rocked by mass social unrest. In Europe the movement of the Yellow Vests has not died out, while the revolt against the “slavery law” in Hungary and the massive wave of protest against the repression of the Catalan movement are only the foremost examples of mass resistance.

Humanity once again faces the stark choice first clearly pronounced by the great woman revolutionary of the 20th century, Rosa Luxemburg: socialism or barbarism! Against this, we revolutionaries should set our eyes on the historic decline of capitalism and the remedy for its barbarism: workers’ power.

Argentina is one of the countries, perhaps the only one for the moment, where a working class hegemony can be achieved in the struggle against capitalism. As opposed to all the reformist forces in the other countries that pose as an alternative to the rule of the bourgeoisie, the FIT-U claims the revolutionary heritage of the international proletariat.

Our cause is the same cause because we are internationalists. The working classes of our countries, and of all countries, can really overcome the destitution and barbarism of capitalism by making world revolution victorious. For that reason your fight is our fight.

Long live the independence of the working class!

For workers’ power everywhere, emancipating all the oppressed from their suffering!

Long live the unity of the international proletariat!

Sofya Zvereva (Chairwomen of the board of OpenSpace), Russia