Humiliating defeat for Erdoğan in local elections: the working class punishes the government for the economic crisis 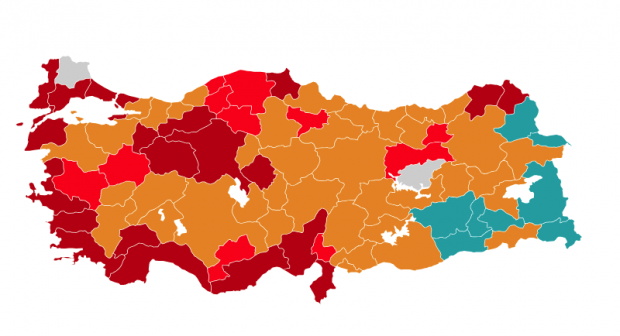 We provide below a very brief summary of the statement put out by DIP (Revolutionary Workers Party) on the local elections held in Turkey on 31 March 2019.

Erdoğan’s AKP government in Turkey has suffered a humiliating defeat at the local elections in Turkey. The working class has punished Erdoğan’s government for the deep economic crisis in the form of a stagflation that has gripped the country for the last six months and promises to cause even further damage for the labouring population for the foreseeable future.

The AKP lost the three biggest cities of Turkey, Istanbul, the capital city of Ankara, and Izmir, to the opposition. This is a defeat of historic proportions. Istanbul and Ankara had been in the hands of the AKP for the last quarter of a century! Moreover, the candidate that the AKP put up for the position of metropolitan mayor of Istanbul was an extraordinarily strong personality of the AKP, Binali Yıldırım, who earlier had served successively as Minister of Transport, Prime Minister and Speaker of Parliament.

In addition to Istanbul and Ankara, the AKP-MHP alliance, the reactionary Islamist-fascist de facto coalition that has been ruling the country since the failed coup attempt of 2016, lost other large cities such as Antalya, Adana, and Mersin, as well as many smaller cities. All in all, this is a straightforward rejection of the callous economic policy of the AKP by the workers and the labourers of the most advanced cities of Turkey in the industrial heartlands of the country. The cities and towns that Erdoğan and the AKP were able to keep under their hegemony are, with certain exceptions, backward provincial centres and rural areas that play little role in the modern economic life of the country.

To add insult to injury, the elections were marred by the absurd episode of the counting of the votes in Istanbul, the most advanced and literate city of the country. Once it became clear that Binali Yıldırım, the candidate of the AKP in Istanbul, was going to lose, at the late stage where 98.8 per cent of the votes had been counted, all counting stopped at 23:20 hours in the night until 10 a.m. Monday morning! The whole country was taken hostage by the system of despotism that has ruled the country for years! Time was frozen and all motion arrested! It was only on Monday morning when it was obvious that no cheating and rigging was possible that the AKP finally conceded defeat. However, a last minute surprise is still not to be excluded.

The Turkish Businessmen’s and Industrialists’ Association (TUSIAD) published a memorandum at the time of the closing of the booths. The message was clear and loud: There are no pending elections from today until June 2023, i.e. for close to four years and a half. The priority, TUSIAD pontificates, should be the “structural reform of the economy”.

This is clearly opportunism of the first order. Calculating that without any elections in the horizon, the government has no need to answer to criticisms, TUSIAD reckons that it can summon the government to attack the rights and gains of the working class brazenly.

What is very significant is that all the major bourgeois parties, whether they were aware of the TUSIAD memorandum or not, concurred in their post-electoral statements with the language used by the organisation of finance capital. Both Erdoğan and his ally Bahçeli, leader of the main fascist party in Turkey, stressed that the coming period was a time span “without elections” and that this period should be used for economic reforms. Kılıçdaroğlu, the leader of the main opposition party assured everyone that they were ready to shoulder all the responsibility that would befall them for the “resolution of the economic crisis”. The bourgeois parties are getting ready to attack the working class with the purpose of laying on its shoulders the burden of the crisis.

What bourgeois parties regard as an “uninterrupted period of reform”, DIP regards as a period in which uninterrupted class struggle will have to be waged in the face of a profound economic crisis. The working class has seen for itself that the Erdoğan government is no invincible colossus. The government is weak, since it has its support base not in the bustling cities of industry, but in the backwaters of the provinces. The depth of the economic crisis is bound to push the working class to put up a resistance against the inevitably brutal conditions imposed by the government.

For an unchained constitutional assembly!

The elections have once again shown clearly that the judiciary and the media in Turkey are hopelessly bound by the chains that tie them to the executive power used single-handedly by Erdoğan.  The new constitutional setup has also dispossessed parliament of many of its powers, turning over to the president of the republic large room to rule by decree. We are thus face to face with a regime that is becoming more and more despotic by the day. And more and more the bourgeois opposition is getting used to the idea of this so-called “presidential regime”.

DIP calls for a United Workers’ Front among all the different organisations of the working class, to start with the various trade unions, in order to stop the offensive the bourgeoisie will unleash on the working classes to make them pay for the economic crisis. The constitutional anomaly that has been brought into being is not reformable. We call for an unchained constituent assembly that can only emerge out of the struggles of the working class and the oppressed. All in all, the deep crisis that society has been thrown into can only be overcome by a government of the workers and the toilers.