GREECE: CARAVAN OF STRUGGLE AND SOLIDARITY 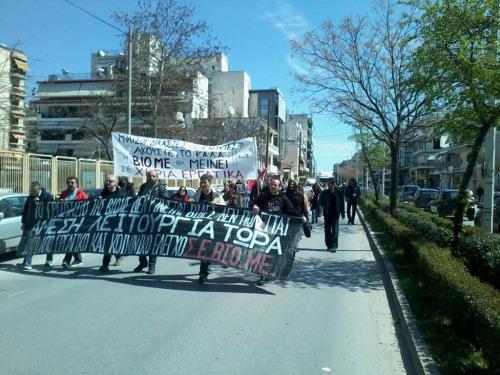 Goal of this Caravan was for VioMe to force a meeting with the Minister of Labour and demand an immediate solution for the struggle of the workers, as promised by Tsipras himself when he had visited the occupied factory about two years ago. Other workers participated not only to support VioMe but also to demand of the government solutions to their own unresolved problems.

For the first time, workers from both the private and public sectors - usually pitted against each other - joined forces to fight for the right of work, against privatizations, and against the entire 'austerity” program imposed by the troika of the EU/ECB/IMF. Their sgtruggle was against capitalist property relations and for re-organising social labour on new bases - with workers’ control and workers’ managment.

The Caravan started Friday evening in -where VioMe and ERT3 are located- Starting Friday evening with a demonstration through the center of Thessaloniki, home of VioMe and ERT3, the Caravan stopped for a solidarity concert in front of the national television building. Through the weekend the Caravan crossed the country by train and bus, stopping in many towns - Larissa, Volos, Levadeia, Chalkis – for demonstrations and educational events with workers in local struggles and factory unions, like the factory workers’ union at Aluminium-Hellas ( ex-Pechiney).

The Caravan arrived in Athens Sunday evening – at the National Radio TV Channel ERT in Aghia Paraskevi. The previous government of the Right and PASOK, on the troika’s orders, had fired everyone and closed ERT. The Caravan got a warm reception from PROSPERT, the union of journalists and technicians. It then entered Syntagma Square in the capital’s center and held a press conference. Each workers’ organization and union in the class action took the floor.

A demonstration was organized Monday morning heading to the Ministry of Labour. But while the Minister knew the Caravan was coming, and had said on the radio that he would welcome it, he “suddenly”  had “to do a special inspection of working conditions at Athens’ airport” miles away!

Workers’ representatives finally met with Ministry officials who assured them the government will have a solution for VioMe before the court decision on sale of the grounds and buildings. The solution was not specified. The Caravan warned the officials and the government that it's will not dissolve but expand and return at the first sign the government isn't keeping it's promises.

Similarly, SYRIZA completely ignored the Caravan until its last day. Suddenly its radio station advertised events, but with no participation of party organisations, nor any criticisms of Minister and the government for avoiding any real confrontation of the workers and their demands. It is worth noting that the government has now presented to parliament a proposed law for Radio-TV National Stations ERT that nearly repeats the legal framework introduced by the previous pro-troika government. The radio-Kokkino (“Red”) of Syriza even criticized ERT3 workers’ demand - as an outstanding part of the Cravan - for workers’ self-management.

Centrist ANTARSYA’s position wasn't much better. It was completely absent from organisation of the Caravan, just as it was completely absent from the VioMe. It sent only a few activists to distribute leaflets at demonstrations in Thessaloniki and Volos, while in Athens SEK (Socialist Workers Party, the Cliffite organization in ANTARSYA) joined with a small contingent to publicize their own Party activities - for next month.

Also completely absent were Stalinist KKE and Maoist organisations. Most of the anarchist movement ignored the Caravan and only a few anarcho-syndicalist organisations participated, mainly in local demonstrations.

The EEK played a crucial role in the Caravan’s organisation and victory. It had joined VioMe’s struggle from the occupation’s first day. When owners abandoned the factory, we demanded its recuperation by workers and placing it under workers control and self-management. EEK members joined in founding the Solidarity Initiative Committee.

We in EEK will continue our struggle for the Caravan as center for coordinating on-going building of a class struggle organization of the proletariat, independent of state and bureaucrats, to make capital and not workers pay for the  capitalist crisis.

In these times of crisis and great expectations, debates on workers control and workers management by VioMe and ERT3 workers have opened a new chapter in  the  workers’ movement in Greece and internationally.