Fight against the imperialist-backed Saudi-UAE war on Yemen! 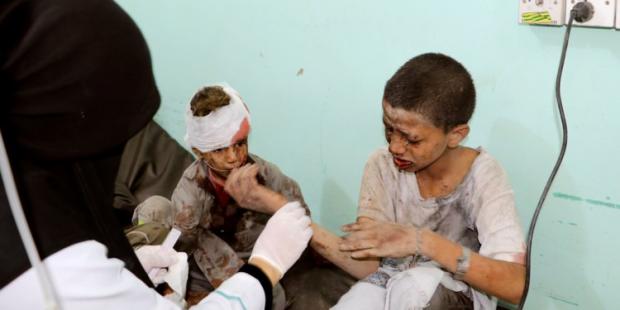 Yesterday, in Northern Yemen, which is entirely under Houthi control, the Saudi-led coalition bombed a bus near or inside a market place, killing dozens or even scores of civilians. Among those killed were at least 29 children on their way to a summer camp. The Saudis were adamant in the legitimacy of this “operation”, claiming that it was in retaliation to a Houthi missile sent to southern Saudi Arabia, killing one person. These allies of the “international community”, i.e. of imperialism are brazenly defending a massacre by recourse to the concept of retaliation! What on earth does the killing of children eight or nine years old have to do with military retaliation? These people do not even have the minimal decency to admit to wrongdoing of the most obvious kind. Normal when one remembers that it the past they have systematically bombed schools, hospitals, weddings and even the dead, during funerals.

We publish below a resolution voted by the Emergency Euro-Mediterranean Encounter recently held in Erethria, Greece on 23-25 July 2018, calling for the defencse of the Yemeni people against Saudi Arabia, the United Arab Emirates and their allies.

A tragedy that goes almost ignored in the Middle East has devastated Yemen and its people. Saudi Arabia and The United Arab Emirates (UAE) have been waging a war on the country for three and a half years now, from March 2015 on. Not only military targets but schools, hospitals, weddings, and even funerals have been bombed. The poorest country in the Middle East is now gripped by hunger, with 80 per cent of the population surviving only thanks to humanitarian aid. The development of babies and small children is disfigured due to malnutrition. A month ago Houdayda, a port at the entrance of the Red Sea, came under the attack of the armed forces of the UAE. This port is the point of entry of a great part of the food that comes to the country from abroad, meaning that a long battle or an embargo would result in outright starvation for millions. There has lately been a lull in the fighting, but it may erupt any moment again.

The Saudi and UAE aggression is a sequel to the efforts of the reactionary Gulf countries to quell the Arab revolution of 2011-2013. Yemen was the country where the revolution reached the greatest pitch after Tunisia and Egypt. Imperialism, US and European, sought an “orderly transition” and, after long machinations, finally managed to replace the 30-year long despot Ali Abdullah Saleh by his deputy Abdrabbuh Mansur Hadi in February 2012, which naturally meant the survival of the old regime under a new guise. With the Arab revolution subsiding after 2013 with the defeat of the Egyptian revolution, the struggle was shifted to other grounds, regional, tribal or religious. In 2014, armed Houthis, a Shiite force in the country that had participated in the revolution, brought down the pro-imperialist and pro-Saudi Hadi Mansour. The Saudis and the UAE attacked subsequently, claiming that the Houthis acted in the name of Iran.

There has been scant evidence of Iranian aid to Houthis. However, that is not the question. The question is that the Houthis are Yemeni. It is their own country that they are defending against the Saudi-UAE alliance. So the war waged by the Saudi and UAE reactionary armies on Yemen is definitely an unjust war. The Gulf sheikhdoms are trying to bring Yemen under their control, as they have earlier done in Bahrain and unsuccessfully tried to do in Syria.

The Saudi-UAE war on Yemen is being fully supported by the USA and European powers, the so-called “international community”, a euphemism for imperialism. It is one of the theaters where Saudi Arabia is carrying out a dress rehearsal of the sectarian war it is planning to wage on Iran. If such a war should materialize, the Middle East will be immersed in a blood bath, with spillovers in countries like Turkey and Pakistan.

It is the duty of all internationalists and anti-imperialists to defend Yemen against the aggression of the reactionary Gulf states, aided and abetted by imperialism.

Stop slaughtering the people of Yemen!

Stop the bombing of Yemen!

Kick imperialists out of the Middle East!