Down with the imperialist coup! Defend Venezuela against imperialism and its lackeys! Forward for a working-class solution to Venezuelan situation! 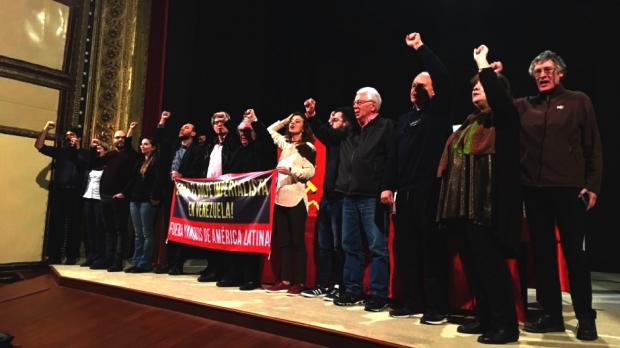 Venezuela is facing a coup attempt masterminded by imperialism. The plotters of this coup pay little attention to disguise it under a democratic mask, of their puppet Guaidó’s constitutional claim and “universal suffrage”. This coup is backed by reactionary governments including those also in Latin America, especially the fascist leaning bannerman of Trump in the South: Bolsonaro. We, the parties and organizations that sign this declaration, state that we are clearly against this coup attempt trying to overthrow Maduro and the Venezuelan government!

Today, the Venezuelan people are kept under pressure by a blockade of political and economic character. This blockade aims to force the Venezuelan people to capitulate to imperialists and their collaborators within or out. One cannot speak about exercise of free will in case the blockade continues. The truth is that, it is certainly put into practice to usurp the will of the people. We announce to struggle against this economic and political blockade of imperialism against Venezuela!

We repudiate this escalation that claim to be nothing less than in the name of "democracy", when it is headed by a Yankee tycoon who has been carrying out a ruthless persecution against immigrants, minorities, women and their rights and that aims to reinforce the role of the US as international gendarme, destroying entire peoples in the Middle East and North Africa. An offensive that is also headed by a notorious Brazilian fascist, surrounded by the military, who ended up coming to power after the banning of Lula and after a coup that deposed the government of Dilma Rousseff.

We denounce the hypocrisy and duplicity of the promoters of this escalation, who have no qualms about supporting bloody and cruel dictatorships like the one headed by the Saudi Prince, Mohammed bin Salman, responsible for the recent dismemberment of a journalist opposed to the Saudi regime in the consulate of that country in Turkey.

The conflict is not only of a political and economic character. Imperialism puts Venezuela under military threat, too. This prospective military aggression would also involve Cuba. Whether it takes place in the form of staging a military coup, initiation of a bloody civil war or direct military assault of US and its local proxies, we commit to fight against any such kind of intervention! We defend Venezuela -and Cuba also- against imperialist military offensive!

The situation in Venezuela is highly connected to the international situation. With the USA under Trump’s rule, trade wars especially those targeting China, sanctions against Russia and retreat of US from agreement on mid-range nuclear missiles, threats towards North Korea, withdrawal of US from nuclear agreement with Iran and sanctions furthered thereafter are unleashed one by one. Now, imperialism is once again on the offensive, this time in Venezuela.

This and other reactionary developments are countered by upheaval of class struggles as can be seen in the Yellow Vests movement and popular rebellions in a vast number of other countries, gaining a decisive significance. The proletarians and the toiling masses of the World are once again ready to undertake great struggles on the opposite pole of all the barbaric tendencies the worldwide crisis continuously produces.

We are internationally at a point where there is no middle of the road on this planet divided by irreconcilable class antagonisms where the working majority is ruled by a handful of bloodsucker exploiters! Today, the economic situation in Venezuela is dire. Its people are in great misery.

Venezuela has recovered the sovereign management of its oil resources but imperialist monopolies such as the American Chevron, the European Total and Statoil continue their activities in agreement with the government. Two thirds of the country's economy are in the hands of the private sector. The market economy has not lost its dominant position. The working class was prevented from organizing independently and forming organs of political power; the country continued to be governed by a bourgeois parliamentary political structure. The economy, which is now bombarded by imperialist sanctions, is dragged into a collapse by the sabotage of the private sector from within. The bourgeois parliament has turned into a coup headquarters.

No middle of the road in Venezuela! It's either sinking in the hands of imperialism or salvation through a workers’ government!

We warn that, if the coup attempt is victorious, Venezuela would experience a huge deprivation of its mining wealth, the loss of important conquests and the application of austerity plans by the IMF, as has been happening in Greece, Argentina and other South American countries, that is, new shortages and privations.

Any attempt to reach a compromise with imperialism and rejection of breaking off with capitalist basis is shown to be condemned to a dead-end. The only way out is through rejection of external debt, expropriation of oil companies and putting the petroleum industry under workers' control, expropriation of wealth obtained by the bourgeoisie through plundering of the country, an extensive program of nationalizations without any compensation to both rip the coup plotters off the economic power they hold and to put an end to the crisis manifested by hyperinflation, low-wages, unemployment and a real anarchy in the market. Every kind of self-organization of working class to ensure its political and organizational independence should be facilitated either in factories and workplaces or in urban neighborhoods and countryside. Venezuelan working class should be armed against the imperialist coup attempt. Soldiers’ committees should be formed within the rank and file of the army to subjugate any attempt within the military officers to side with the imperialist coup. Now, it’s for sure that those measures can only be implemented fully and consistently by a workers’ government in Venezuela.

We warn about the seriousness of the humanitarian crisis, but we oppose the imperialist plan to make an excuse of emergency aid in order to infiltrate the country politically and convert Venezuela into a colony. We call on workers, especially in Latin America, to organize international humanitarian aid under the control of the union confederations and elected workers' representatives at their workplaces.