DIP statement on the 80th anniversary of Trotsky’s assassination: Return to Trotsky via Lenin! 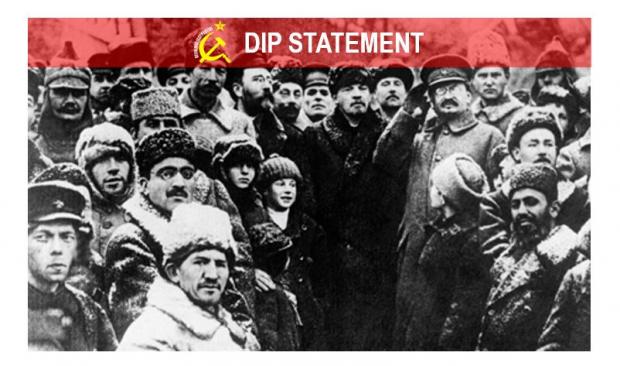 It was exactly 80 years ago, on 20th August 1940, that an ice-pick wielded by a Stalinist agent shattered Trotsky’s skull, leading to his death the next day. That ice-pick was not aimed only at one of the greatest revolutionaries of the 20th century, one of the most penetrating intellectuals of his time on the international scene, one of the greatest theoreticians of Marxism of all times, but also on the continuity of Bolshevism and of the October revolution in Russia and internationally. It was thus an attempt at assassinating the heritage of Lenin, the greatest revolutionary of the 20th century.

For despite his immense contribution in his own right to Marxism, to the world revolution and to the emancipation of human kind as a revolutionary leader and as a Marxist theoretician, the fundamental importance of Trotsky and his major contribution to the communist movement, when considered on a world-historical scale, derives from the fact that he alone, from among his generation, fought to the end for the continuity of the Leninist heritage and the Bolshevik practice. This was an immensely difficult struggle against the rise of a privileged bureaucratic stratum in the land of October that destroyed the generation of communists who had set off the first round of world revolution by accomplishing the October revolution and establishing the Communist International (Comintern). By 1940, the bureaucracy, of which Stalin was only the ruthless leader, had murdered the entire leadership that had led October. Trotsky was the only remaining leading light of that generation. The assassination 80 years ago finished the task of physically annihilating the last link of the chain of real Leninists.

Since then, the constellation of Stalinist movements and governments of all stripes, Soviet, Maoist, Hoxha followers and others and their present-day epigones have clung to this ideology that was nominally Leninist, but in fact a total break from the decisive principles of Lenin’s heritage. It is one of the greatest ironies of history that the concept “world revolution” was converted into a “Trotskyist” concept by these falsifiers of history, and thus sarcastically dismissed, when, in fact, it was the fundamental goal for which Lenin spent his entire life! If one wishes to break from Lenin’s programme of world revolution and choose the reactionary utopia of “socialism in a single country”, then of course Trotsky is a traitor to the cause because Trotsky adamantly refused the disfiguration of what was the essence of the programme of Bolshevism and of the Comintern. So to side with Stalinism was presented as a struggle against the Trotskyist virus, but was in fact a wholesale war against Lenin.

History has amply confirmed Trotsky’s views. His prognosis, both theoretically substantiated in that greatest Marxist work of the 20th century, The Revolution Betrayed, and politically advanced in that distillation of Comintern doctrine, the Transitional Programme of 1938, that unless the working class brought down the bureaucracy through a political revolution, the bureaucracy would finally opt for the restoration of capitalist private property has proved resoundingly, and lamentably, correct. The whole younger generation of socialist and communist militants around the world should mark this one point regarding the collapse of the 20th century experience of socialist construction: it was not imperialism, nor internal subversive forces that represented a nascent capitalist class, but the very leadership of the Soviet Union and of China, as well as many other such countries, abusing the honourable name of “Communist Party”, that paved the way to the restoration of capitalism in each of those countries. It was the Gorbachevs and the Yeltsins, the Dengs and the Jaruzelskis who led the return to capitalism.

The fact that latter-day Stalinists still cling to the programme of “socialism in a single country”, despite the overwhelming evidence of its miserable collapse as a guide to action, only attests to the profundity of their dogmatism. Today the younger generations, in whom Trotsky had such great confidence, should not forget for one single moment that despite the communist phraseology that dominates their discourse, even the most radical sounding “communist” party in the world that descends from a Stalinist lineage attends international meetings of the so-called “communist and workers’ parties” together with the Communist Party of China! There is no more telling truth about Stalinist “communism” today than this shameless capitulation to the ghost of what was long ago a revolutionary party, but is now the leading power in a country that relies on ruthless capitalist exploitation.

There are thousands, tens of thousands, or even occasionally hundreds of thousands, depending on the size of each party, honest and sincere workers, peasants and youth at the rank-and-file level of these “communist” parties. They need to be won over to real, revolutionary Marxism. A road needs to be opened back to Lenin. That road now passes via Trotsky. Back to Lenin via Trotsky—this is, in summary form, the great duty for working class fighters yearning for liberation although they come from a Stalinist tradition.

The quasi-absence of Lenin in the Trotskyist movement

And who are they supposed to turn to for illumination regarding what authentic Marxism and communism stand for and how to fight capitalist class society? How are they to return to Lenin, whose ideas have been submerged under an entire geological layer of falsifications? Well, of course, the movement, or rather movements, that claim the heritage of the Fourth International! This was originally the organisation that Trotsky established, together with his comrades the world over, in 1938, just in time before his assassination, to provide for the continuity of the Leninist heritage and of the Comintern, not only in the domain of ideas, but in terms also of a revolutionary organisation, a step taken in the best Leninist tradition.

The irony of it all is that, with certain exceptions, Lenin is practically absent in those movements that claim the heritage of Trotsky. To differing degrees, the Trotskyist movement is very sensitive when it is a question of defending the heritage of Trotsky himself, but rarely brings the wisdom and the insights of Lenin into the construction of today’s revolutionary parties and today’s International. Lenin is virtually absent in the voluminous political literature of the Trotskyist movement. Ideas that are specifically contributions of Lenin’s are relegated to the second plan or, worse, abandoned wholesale. It is very doubtful that the curriculum of education used by many Trotskyist organisations includes a concentration on Lenin’s specific Marxism.

But the gravest of all is that most movements that claim the heritage of the Fourth International have neglected or even abandoned Lenin’s intransigent position on the primordial importance of the vanguard combat party for the working class and the revolution. What Is To Be Done? is the most typical, if not the most seminal, product of Lenin’s Marxism. This is because this pamphlet lays the theoretical, and to a certain extent practical, basis of the lifelong endeavour that Lenin pursued single-mindedly, party-building. This is the one aspect of Lenin’s revolutionary theory and practice whose importance Trotsky did not grasp until the February revolution of 1917 brought these two giants together. But once he did realise the overriding importance of the party, Trotsky, in the very words of Lenin, became the “best Bolshevik”.

The Trotskyist movement disregards most of this. For a majority of Trotskyists, with notable exceptions again, the label Bolshevik is not a characterisation that distinguishes revolutionary Marxists from phony ones. For Trotsky himself it was. This is why he himself frequently called the movement he led in the 1930s Bolshevik-Leninists.

Once you isolate Trotsky’s contribution and importance from Lenin’s figure and ideas, you impoverish Trotsky’s Marxism and diminish and disfigure his world-historical importance. Trotsky was not primarily a theoretician of permanent revolution, nor merely an oppositionist to Stalin and the bureaucratically degenerated Soviet state. No, he was trying to set once again on its feet the vanguard organisation of the international working class that was destroyed twice in the first half of the 20th century, first by the Social Democrats and later by the Stalinist representatives of the Soviet bureaucracy. For this he was trying to form a bridge between Bolshevism, the Comintern and Lenin, on the one hand, and the new generations of revolutionaries, on the other. This is what he wrote in his diary word for word in 1935.

“The work in which I am engaged now, despite its extremely insufficient and fragmentary nature, is the most important work of my life, more important than 1917, more important than the period of the Civil War or any other… I cannot speak of the 'indispensability' of my work, even about the period from 1917 to 1921. But now my work is 'indispensable' in the full sense of the word. There is no arrogance in this claim at all. The collapse of the two Internationals has posed a problem which none of the leaders of these Internationals is at all equipped to solve. The vicissitudes of my personal fate have confronted me with this problem and armed me with important experience in dealing with it. There is now no one except me to carry out the mission of arming a new generation with the revolutionary method over the heads of the leaders of the Second and Third International.”

Respect the great man! Carry on the work that he considered the most important work of his life! Return to Bolshevism, the Comintern and Lenin! If you do not, then all your efforts to follow him will fail because that was the mission he set himself. Moving away from Lenin puts a revolutionary movement, whatever the phraseology used, at a distance to Trotsky as well. Thus the watchword should be clear: return to Trotsky via Lenin. So that you can lead the hundreds of thousands of honest and sincere rank-and-file workers and youth in the so-called communist parties to Lenin via Trotsky.

On this 80th anniversary of Trotsky’s assassination we do not mourn. We celebrate the lives of the two great revolutionaries and swear that we shall follow the path they charted, finally make a reality, in this 21st century, of world revolution after the frustrated revolutions of the 20th and thus make it possible for a classless and borderless society, in which humanity not only rids its world of the exploitation of class by class, but also achieves total emancipation by eliminating all oppression, whether racial or national or gender or religious.

That is the only way one can remember Trotsky—and Lenin.