Defeat the Imperialist Coup of Trump and his Puppet Guaidó 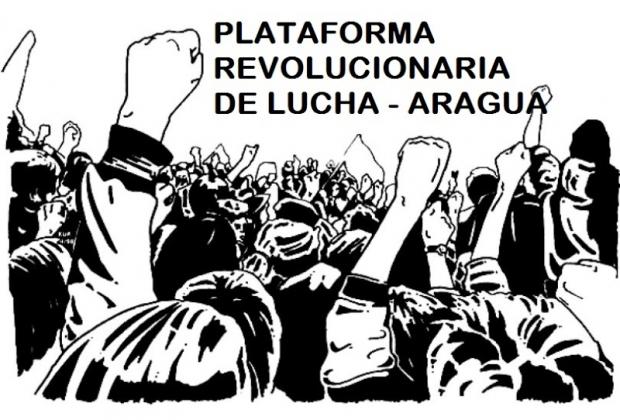 This is a political statement coming from inside Venezuela on the coup attempt instigated by imperialism and the threat of a civil war in the country. The statement has been sent to us by Opción Obrera, a revolutionary Marrxist grouping that is a sister organisation to the DIP and EEK, the parties behind RedMed. The Plataforma Revolucionaria de Lucha – Aragua (Revolutionary Platform of Struggle – Aragua) is a local group of revolutionary militants struggling in the State of Aragua in federal Venezuela. Opción Obrera is affiliated with this group and is in political agreement with the statement itself. This statement was earlier published on our web site in Spanish. This is the English translation of that text made by the authors of the document.

Venezuela is not a commodity

The origin of the coup - in process - was planned by the US State Department along with the far right of the opposition to the government. The right-wing opposition seeks to justify a possible bloodbath by blaming Maduro and his efforts to keep control of the government.

For the period of sessions of 2019, and taking advantage of the fact that on January 10 Maduro assumed his new presidential term, the National Assembly decides to sell himself to Yankee imperialism. Trump chose the puppet Guaidó from his womb to build the stage of the coup d'état. In this way, all that oppositionist clique betrays the country because they represent interests opposed to those of Venezuela, beyond any legal exchange.

The coup d'etat against Venezuela is also against all Latin America because it represents for Yankee imperialism the claim to annihilate all resistance to its interference, violating the self-determination of the peoples and declaring the shameless theft of our resources.

In that sense, it is naive to think that the Trump government, which supports the crown prince of Saudi Arabia, who ordered the assassination and then dissolution of the body of the Arab journalist Khashoggi, and rejects the Latin emigration from his backyard, may come in the name of democracy and with humanitarian aid.

Similarly, the despair of a sector of Venezuelans by the disaster caused by those who have led the country, has led them to believe that the opposition, now, will recover Venezuela from the thunderous crisis it suffers.

The colossal loss of prestige of Maduro and his team is due to his responsibility in leading the country to ruin, which they do not admit, and on the contrary, in the face of his weakness, he keeps sharing the power and increasingly benefiting the cliques and the high military commanders, but the right wing opposition to not being able to respond to the majority discontent of the country, lends itself as a junior partner, and thus share the crumbs that will allow them the greatest power in the world, the bestial, the most murderous, the US government, who for a direct invasion or intervention with mercenaries and stupid allied governments. They do not care about a bloodbath in Venezuela. It only slows them to a certain point, the consequences within their country for their possible casualties.

Maduro does not represent any socialism, quite the opposite. There is no middle way between socialism and capitalism, between what you want and what the Maduro government really does, which is more and more capitalism. Its measures have taken the country and its political movement to the precipice.

It is important to note that there has always been an economic war against workers by public and private employers, foreigners and criollos, in which all governments have been their accomplices, before and after 1999; today with Maduro, is not the exception.

Similarly, the military has always exercised its role as guarantor of their governments, their function is to enforce order, especially on workers, in addition to the current government were enriched through corruption.

On the other hand, Russia and China can take advantage of our situation and favor Venezuela in a limited way according to their interests, but they will not sacrifice themselves for us. They defend theirs and can face the US but not Venezuela.
The workers have the key to recover the country

The key to saving the economy does not have the gringos, nor do the military have it, the workers have it with their control of all the factories; it is the only guarantee to put them to produce and reactivate the economy to recover Venezuela.

Our answers today are decisive for not surviving, dying for lack of everything or emigrating, and on the other hand, to prevent a war with murderous foreign intervention by the US Army and the support of the governments lackeys of Duque and Bolsonaro.

All this refers to the following dilemmas

Up to now, and in this superb crisis, worse still, it does not matter what is necessary and indispensable, but what enriches the importer and its accessory, the capital comes from the money of the State or from that deposited in the bank. The government and the bank decide who they favor to trade and speculate. The results are the lack of production and the lack of assistance for all services to the community; the critical and without arrangement are the services of domestic gas, potable water, transportation, electricity and health.

Despite the immense resources of the country, our only way to recover from bankruptcy is that foreign trade (the import) must be nationalized, in the same way create a single bank, to determine the priorities of the country and based on that, import and invest to produce. This can only be done with the control of the workers of those areas, elected in democratic assemblies, with delivery of accounts of the management and at all times be revocable by those who elected them, as well as all the strategic companies of the country, especially the oil In the same way, the non-payment of the debt and the money used to benefit the country. Likewise, workers must have a salary that covers the basic family basket.

Down the negotiations, for the people there should be no secrets

Dialogue or secret negotiation between the two sides, government and right-wing opposition, both, we reiterate, is to try to build a broken economy for themselves that dismantled the country from squandering the extraordinary oil revenues, and will not be to recognize the value of the labor force but at the expense of it, that is, depreciating it even more. All budgets, plans or projects are similar, they only differ in rhythm and administration, high prices, foreign investment, more indebtedness, debt payments, more imports, free exchange control. None favors the workers nor the vital production for the country.

The dialogue that will have to be imposed will be on wages and collective bargaining, and not to negotiate them but to equate them minimally with the value of the basic family basket.

The embargo on income from the sale of oil

It is life or death for the country to defend the oil industry (PDVSA) from drilling, refining and distribution; this can only be done by the workers and their armed militia, by their knowledge and experience, taking the industry to put it to produce and defend it, without bureaucrats or military. It is the only prospect of success.

Before an intervention or occupation of the country must respond or resist with a popular armed autonomous militia, in each factory and in each community.

No to secret dialogues.

Restitution of collective hirings confiscated by the government.

No to the payment of the fraudulent external debt and confiscation of the capital of the corrupt.

Nationalization of the main companies of the economy, under the control of their workers, without bureaucrats or military.

Nationalization of foreign trade and banking; for a single bank to have those resources for the urgent needs of the people and the country.

For a minimum wage, equal to the basic family basket and the sliding scale according to inflation.

Down the criminalization of workers' and popular protest.

We are against all indifference towards the situation in Venezuela and we are unconditional with Venezuela against the pretensions of imperialism.