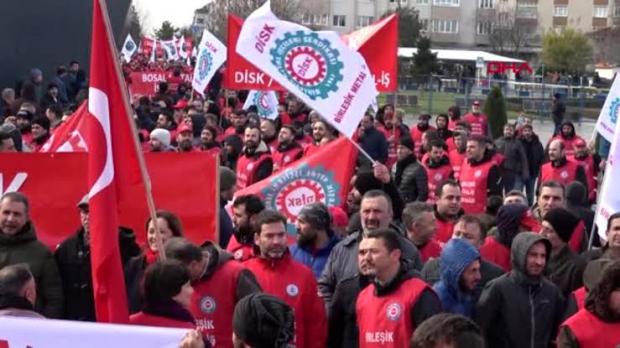 we found out about your planned strike starting on February 5th, 2020. We would like to express our solidarity with your struggle and our support for your just demands.

The Turkish government, representing the interests of Turkish capitalists, has always tried to legally prohibit the threat of worker strikes, especially in the metal industry, which is important for the Turkish economy. This is happening at a time when the economic crisis in Turkey and rising inflation are making the lives of millions of workers more and more difficult. Turkish government policy will only plunge more and more people into poverty and misery, while a small minority can freely enrich themselves.

Iranian workers can also understand your situation very well. Hundreds of thousands of workers not only have to fight for better working and income conditions, but also for the right to their independent organizations and their unpaid wages. The regime of the Islamic Republic, which stands for murder, oppression, torture, sexualized violence, deception and lies, has driven millions of people into poverty and misery through its neo-liberal economic policy.

The struggle of your comrades in Iran has never stopped in recent years. They are fighting at the forefront not only for better living conditions, but also for the overthrow of the capitalist regime of the Islamic Republic. This can also be seen in the recent protests in Iran.

We have to stand together. For us and you comrades, it is important to be determined, to organize and not to be divided. We are certain that through your determination and your fighting spirit, through the sympathy and solidarity of the other workers from all parts of Turkey and through international solidarity, you will be able to implement your just demands.

Proletarians of all countries, unite!