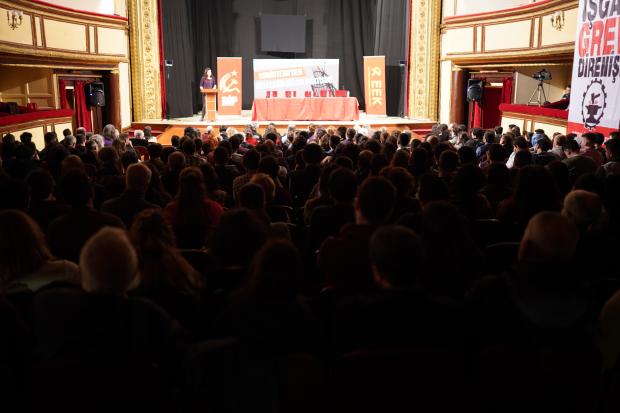 We, the revolutionary parties and organizations based on the program of the Coordinating Committee for the Refoundation of the Fourth International (CRFI), in this International Working Women’s Day on March 8, 2019, salute all the multiply oppressed, exploited, resisting and rebelling women all over the world fighting against male domination and barbarism generated by global capitalism! Without women emancipation there is no universal human emancipation, world Socialism!

The on-going more than a decade now, still unresolved and sharpening again crisis of the global capitalist system has already produced unprecedented social disasters and sufferings that affected particularly the women. But also, it produced the upsurge and internationalization of a tremendous, mass, emancipatory women movement fighting at the forefront of the rebellion of all oppressed all over the planet, from Northern and Latin America to Europe, the Arab-Muslim world, Asia and Africa.

All demands in the interest of working women collide with the basic trends of imperialism and capitalism in crisis towards war, social devastation of living conditions, repression. So, they become intertwined with the political-social demands of the vast popular masses for bread and freedom, for the right to have a really human life in dignity, against the barbaric policies of the ruling classes, of their politicians and capitalist governments.

In the US under Trump, the women movement came first against not only the misogyny of the ultra-reactionary President but also against his war policies, including his plan for an infamous “Wall” to be build in the Mexican border. This racist plan’s first victims are women, separating mothers from their kids and destroying all human bonds. Trump’s Wall is an act of war against the Latin American migrants, the victims of imperialist capitalism, but at the same time, an act of war against the freedoms of the US people itself as it is demonstrated by the “State of Emergency” declared by the US President.

In Brazil, it was the mass women movement Ele Nao which valiantly mobilized against the fascist Bolsonaro. In Argentina, the huge, combative women mobilizations for the right for abortion interacted and deepened the crisis of the regime under Macri. Similar struggles for the legalization of abortion emerged not only in other Latin American countries but also in Europe, leading to a victory in the referendum in Ireland and to mobilizations in Poland against the clerical far right government. Huge protests and demonstrations against the caste system and discrimination rose in the other corner of the world, in India.

It is not despite but, on the contrary, it is because of the specificity of women demands that they acquire specific strategic weight in the struggle for a universal social emancipation. Women are target of the brutality of existing social conditions dominating all spheres: gender relations, family, education, labor relations, all manifestations of life activity.

As declining male dominant capitalism plunges in a global crisis, brutality against women takes both more sophisticated and more monstrous forms: escalation of violence against women and femicide, domestic slavery, family oppression, sexual abuse in and out the family, barbaric attacks against migrant women, refugees from wars and famine, trafficking,  growing inequality in labor relations,  growth of women precarious work, over-exploitation and sexual harassment in the workplace, intrusion and control of education, of legal, social and personal life by the Churches or Muslim or other religious institutions, obscurantism in education (including the closing down of gender and women studies departments as it was done by Orban and planed by Bolsonaro) etc.

Women emancipation needs a world revolution. In the “Yellow Vests” popular rebellion in France, where there is a vast women participation, a woman activist quoting Mirabeau said: “When women are in the forefront of the struggle, revolution is not far behind”.

Workers emancipation has to be done by the workers themselves. But workers cannot emancipate themselves without acting as a universal class, that is fighting not only for immediate workers demands but also for the liberation of women and all oppressed from every form of domination and exploitation, “to overthrow all conditionsin which human being is a debased, enslaved, forsaken, contemptible being”(Marx).

Only the workers who fight hand with hand with the women for the sake of women can claim having a class consciousness. The women movement with its own demands have to join in struggle the workers movement under the flag of a revolutionary International for a proletarian revolution to transform the world and change human life.

For the international unity of action of the women movements

Stop the femicide! Punish every act of violence against women! Organize self-defense of women!

For the right of a legal, safe, and free abortion!

For the separation of the Church and the religious institiutions from the state and for the confiscation of their fortunes under workers control for use to social needs! Secular, free, socialist education!

For the withdrawal of Muslim religious institutions from political life, from the general legal system, from education and from meddling into women’s lives on the basis of a proletarian secularism, explaining to workers that religious and sectarian divisions pit workers against each other and serve the purposes of our common class enemy, the capitalists!