by Christian Rakovski Balkan Socialist Centre and RedMed
May 20, 2018 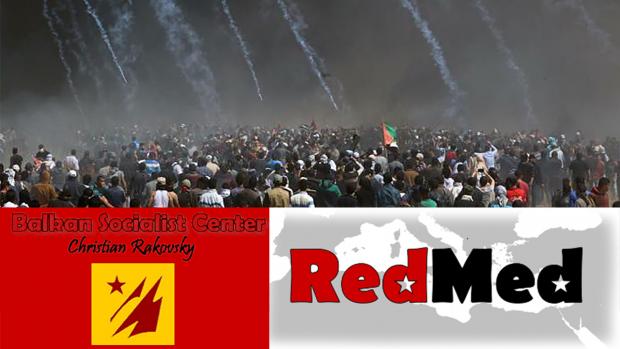 Stop the massacre of Palestinians!

Down with the racist-Zionist state of Israel!

For the defeat of imperialism and Zionism!

Three developments in the space of three days have set the Middle East on fire. The tragic element is the cold-blooded murder, on 14 May, during the totally legitimate “March of Return”, of at least 61 Palestinians, among them five children, by the Israeli army at the border of Israel and Gaza, which has also left thousands wounded. But that is only an extension of the shameless policy of warmongering in the Middle East at large pursued by the Trump administration and of Zionist Israel. On 12 May, Donald Trump decided to withdraw form the deal that was signed between Iran and the five permanent members of the Security Council plus Germany and the European Union in 2015, a deal that traded cessation of Iran’s nuclear programme in exchange for the lifting of the sanctions on that country. And on 14 May, the United States opened its new embassy in Jerusalem/Al Quds, thereby officially recognising this historic city of unique importance for the three monotheistic religions of the world, Judaism, Christianity, and Islam, which are also currently the major religions of the Middle East, as the capital city of Zionist Israel, thus creating a powder keg ready to explode.

The withdrawal of the United States from the 2015 treaty with Iran implies a return of the commercial and financial embargo on Iran, which Trump threatens to apply to all the companies that establish economic and financial relations with Iran, including the companies of its allies in the European Union.

Both the withdrawal from the agreement and the moving of the US embassy to Jerusalem/Al Quds imply a significant support to the war policies of Zionism against Iran and the Palestinian people. Israel has already taken initial steps in this direction by bombing Iranian bases in Syria.

The decision by Trump to withdraw from the Iran deal is also a clear support to Saudi Arabia, which underhandedly foments a war by all kinds of Sunni sectarian groups against the Shia around the Middle East and their Alevi allies, fanning the flames of civil war in Syria, waging a bloody war in Yemen against the Shia Houthi and threatening an all-out war against Iran.

Trump’s policy thus has three axes: First, it is a move that caters to Israel’s worries about the only state in the Middle East that can really challenge it, Iran. Ever since the destruction of the Saddam Hussein regime through the US-UK led invasion of Iraq after 2003, Israel has seen Iran as its main antagonist in the region.

Third, and most urgently, the US provocation concerning the status of Jerusalem/Al Quds is a clear signal that the US administration of Trump is fully behind the reactionary policies of the Netanyahu government.

All of this has initiated a new escalation of the imperialist tendency to create wars and catastrophes.

No confidence should be invested in the European imperialist powers regarding either the Iran nuclear deal or the fate of the Palestinians.With respect to the US withdrawal from the nuclear treaty, Europe “regretted” the decision, but that will probably be all they will do. Giants such as Airbus, Volkswagen, the French oil company Total and others have signed contracts with Iran and started delivering.  However, Already, the Danish company Maersk, the world’s largest oil shipping container firm, said it was going to move out of Iran business gradually because of US sanctions. Total also announced on Wednesday that it was going to pull out of its 50.1% stake in the South Pars 11 oil field. This shows that the move by EU officials to give comfort to EU firms operating in Iran is simply saving face and a method of bailing out smaller firms from bankruptcy. Experience shows that these powers side with the US despite temporary disagreements such as the 2003 war and invasion of Iraq. And it should not be forgotten that Britain and France have only recently collaborated with Trump in air bombing Syria and in tearing the country apart.

Apart from the imperialist powers, Russia and China also have to take care not to deepen the commercial war declared by Washington against them. Trump has decimated the global Russian aluminium giant Rusal, forcing it to sell its shares to the oligarch who was its major shareholder. Russia is no dependable ally of the oppressed peoples of the region: On 9 May, on the eve of the declared opening of the US Embassy in Jerusalem, on te occasion of the great Day of the Anti-fascist Victory, Netanyahu was official guest in the parade in Moscow on the side of Putin. This was a new stab in the back of the Palestinian and all Arab peoples, as well as the people of Iran, in the context of the secret diplomacy of this Bonapartist regime.China, for its part, seems to be acceding to the demands of international finance capital concerning a deeper opening up of its financial markets to international capital

The rise in the Iraqi elections of Moqteda al-Sadr, sworn enemy of the US, is a possible threat to US plans in the region, as the victory of Hezbollah in the elections in Lebanon certainly is. The Erdoğan government in Turkey and Qatar are under the pressure of the US and Saudi Arabia, since they have been prevaricating on the question of Iran and sitting on the fence. There is further the increasing conflict between Turkey and Greece that feeds into the dangerous situation. On May 8 Greek Prime Minister Tsipras and  President of the Republic of Cyprus Anastasiades made a deal with the murderer Netanyahu in relation to the EastMed  gas pipeline, sharpening the tension in the eastern Mediterranean and between the warmongering  Greek and Turkish  ruling classes.

The nuclear deal was supposed to bring prosperity to Iran. However, the penetration of foreign capital into Iran in the last two years has not benefited the working masses in the least. On the contrary, the Iranian government has pursued a policy of impoverishment of the masses. That is why a popular rebellion broke out in the country in the last days of 2017, which extended to the first week of 2018. The Iranian regime is after the best solution for the profits of the enterprises of the mollahs and the Pastaran (Revolutionary Guards), the real beneficiaries of the Iranian regime. Only the working people and the poor of Iran can wage an effective war against imperialism and Zionism.

We call on the international working class of all continents to fight the imperialist preparations for a war on the scale of the entire Middle East.

Down with the sanctions and the military escalation against Iran!

For the defeat of imperialism, of Zionist Israel and of Saudi Arabia in case war breaks out!

We call on All Arab countries and Turkey to cut all diplomatic, military, economic and cultural relations with Israel.

Down with Zionist Israel! For a democratic, secular, socialist Palestine!.

Down with the reactionary, obscurantist and racist kingdoms, sheikdoms, and emirates of the Gulf! For a democratic republic of the Gulf that enfranchises the slave-like foreign workers that form the working class of these countries! Support the independent struggle of the workers and the poor of Iran against imperialism, Zionism and reaction!

We call on the workers of imperialist countries to step up the class struggle against their class enemies in their own country.

Kick imperialism out of the Middle East!

For a Socialist Federation of the Middle East and North Africa!