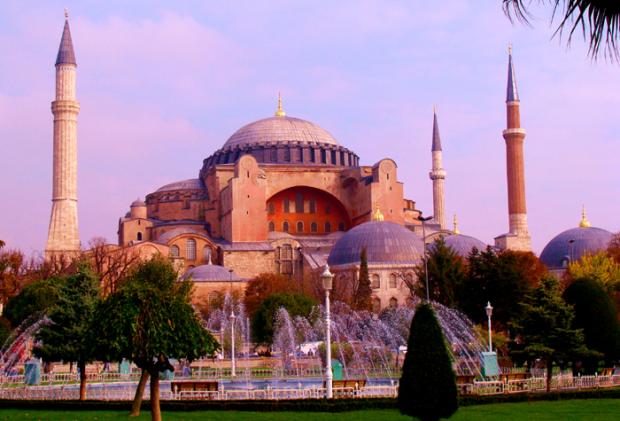 The decision by the Turkish Council of State to convert Hagia Sophia from museum back into a mosque, and its immediate ratification by President Erdogan - who had played the main role to the decision- is a reactionary act of nationalist blindness and religious intolerance. It is adding fuel to the fire of nationalist rivalries in the Eastern Mediterranean and the Aegean Seas, increasing the risks of a bloody war in the region.

By condemning unequivocally the intolerant act of the Erdogan regime, we declare unequivocally that we keep our uncompromising class political opposition to the equally intolerant nationalist stand of the Greek capitalist class, and to the propaganda by the State, the right wing government, the Church and mass media. The answer to nationalist and religious fanaticism is not “our own” bourgeois nationalism. It is proletarian internationalism and solidarity, fighting against the local bourgeoisie, their reactionary cliques and the imperialists who are eager to take over the subjugated, mutually ravaging local capitalisms.

The reactionary decision to convert Hagia Sophia from museum back into a mosque changes the status that existed since 1934, when the government of Kemal Ataturk secularized the Hagia Sophia mosque converting it into a museum. Now, the Erdogan regime’s decision has two targets, on the international and national level.

Internationally,the regime wishes to give a message of intransigence in order to be able to negotiate later with the imperialist Western Powers, the United States, the countries of the European Union (France, Italy, etc.) and its regional competitors, (obviously, in this case, Greece), the controversial issues of EEZs, continental shelf, gas pipelines in the Eastern Mediterranean and the Aegean Sea.

By claiming the role of a regional “sub-imperialist” hegemonic force, Turkey attempts to resurrect the Ottoman empire’s domination from Turkestan in Central Asia to Iraq, Syria, the Eastern Mediterranean and Northern Africa, starting with Libya. The Turkish Army has for decades occupied almost half of Cyprus and more recently part of Syria, while intervening pretending “reasons of national security” in Iraq, in its permanent war against the Kurdish rebels.

At home,the autocratic Erdogan regime by triggering religious fanaticism and a fascistoid nationalism, tries to conceal the insoluble and aggravating economic and social problems caused by the global capitalist crisis. In Turkey - even before the COVID-19 pandemic – the economy took a catastrophic turn: recession in production, huge unemployment, inflation, a huge foreign and domestic debt. Nationalism and religious obscurantism are used to divert the discontent of the working class and the popular masses from the class struggle and the struggle against Erdogan’s despotism. The regime takes a fake “populist anti-imperialist” façade, although its ambition is to become the partner and policeman of Western imperialism and multinationals…

At the same time, the decision on Hagia Sophia tries to give a mortalther blow to the tradition of Republicanism brought to Turkey by the 1923 bourgeois revolution, in order to build a state of a religious character, a kind of a Turkish version of an Islamic Republic, serving the Turkish bourgeoisie and imperialism.

We join the democratic voices in Turkey, in the Muslim world, internationally, as well as of the world of arts and culture, and we demand the restoration of the status of the Hagia Sophia site as a museum. It is a supreme creation belonging to the world's cultural heritage. The territory is of course Turkish under Turkey’s sovereign rights. But Hagia Sophia transcends the borders of  a particular country and national State, with its universal character, as a symbol of unity between peoples and cultures, with different faiths and national identities. For this reason Hagia Sophia is inscribed in UNESCO’s World Heritage List.

The response to Erdogan's strategy of tension is not to incite nationalism in Greece or a similar religious fanaticism. History teaches that each conqueror builds his own symbols of sovereignty over the symbols of the conquered. So it was done by Christianity dominating over the ancient Greek culture -what they called paganism- building the Christian churches on ancient temples with materials from the same temples they destroyed. The Ottoman rule over byzantine territory for more than 400 years resulted in the conversion of this Christian temple into an Islamic mosque. In the 20th century, the republican secular (bourgeois) revolution established the temple as a symbol of world cultural heritage. Trying to turn history back by invoking religious doctrines as “historical facts” granting exclusive ownership rights (or as reactionary Zionism in Palestine does with the invocation of the Bible) means to return to the barbarism of the slaughterhouse, this time using the most modern weapons of extermination.

Unlike the bourgeoisie, their governments, their embedded intellectuals and their vulgar columnists, the working class and the revolutionary proletariat on both sides of the Aegean Sea must develop a common internationalist struggle. The creations of the human intellect in the history of mankind are monuments that unite points of convergence of civilizations. The revolutionary proletariat will develop these monuments, respecting the diversity of cultures and historical experiences of each people. Our inspiration is not the warmongers on both sides of the Aegean Sea, who only cause death, misery, manslaughter, hunger, poverty and humiliation. Our inspiration is Sheikh Bedreddin who -six centuries ago- led one of the first communist and internationalist farmers' movements (his statue is in the market of the Greek city of Serres). By the words of the great Turkish communist poet Nazim Hikmet, Bedreddin taught:

“I will now reveal myself and rebel!

People of the earth, let's take over the earth

Using the power of science

and the secret of unity

We shall abolish the rule of nations and religions”.

Our inspiration is Rigas Feraios, the inspirer of the bourgeois-democratic social revolution in the Balkans, who in his poem Thourios and in his Charta calls for a revolution against the tyranny of the Ottoman despotism - against the Sultan, the Pashas, the Patriarchs, the Metropolitans, the Phanariots, the Kocabaṣı – without distinguishing people of different religion or language,“without excluding religion and dialect, Greeks, Albanians, Vlachs, Armenians, Turks and any other people”.

Facing the nationalist blindness and warmongering of the dominant classes, we must fight for the internationalist unity of the working class. “The proletarians have no fatherland” as the Communist Manifesto says. To nationalism and religious fanaticism we counter-pose the socialist revolution against “our own” capitalists, for a Socialist Federation of the peoples of the Balkans and the Middle East, for free peoples without masters, local capitalists or imperialist patrons.