"Citizens of the Russian Federation - against amending the Constitution!" 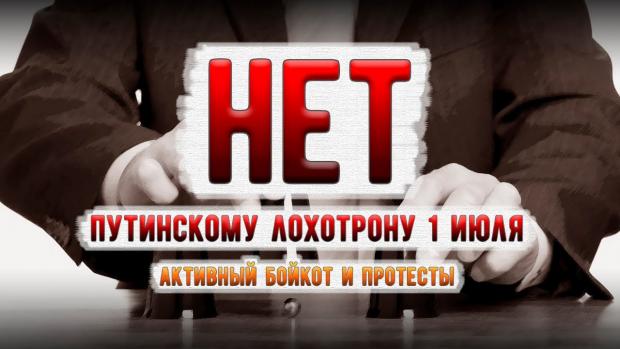 Despite the ongoing epidemic of coronavirus in the country and the danger of infection during voting, the Russian "authorities" decided to vote on July 1, 2020 to amend the current Constitution of the Russian Federation, ignoring the fact of violation of the current Constitution in the preparation of the vote and its upcoming violation during its conduct. Full responsibility, not only historical, for these violations, for the preparation, organization, holding of the vote on July 1 and its consequences for the country and its citizens rests entirely with the organizers of this tragedy and their accomplices. But this responsibility, at least morally, will fall on all those who will go to the booths on July 1 and vote to introduce a package of amendments to the Constitution.

A special responsibility lies with those citizens who insistently indicated and indicate these violations of the current Constitution, who spoke and opposed the holding of a vote on July 1, who proposed and propose, since it was necessary to amend the Constitution, to conduct a full-fledged referendum, strictly in accordance with the current Constitution and Russian legislation, with a vote on each amendment or on a new Constitution, several projects of which have already been developed by citizens themselves and their public associations, and who are faced with the difficult choices created by violators. Among them, heated debate continues about what they can and should do in the situation created by the "authorities" on July 1: come to the so-called polling stations and vote "against"or announce publicly and conduct an active boycottof the vote. More than significantly, both those who favor voting against and those who propose an active boycott explaining their position are absolutely confident that there will be no free, fair and verifiable voting and counting. In fact, voting will not last one but several days, including by mail, using the State Services system and early voting, you can vote at any polling station. There will also be no observers from political parties at polling stations. It is impossible to check the correctness of the casting of ballots and their counting after voting. Does all this not create optimal opportunities for all kinds of fraud? Thus, all opponents of amending the Constitution are unanimous in the fact that the vote will be fake and its results will be exactly what the "authorities" desire them to be.

Under these conditions, the Association "Soviet Union" (ASS) does not consider it possible to take part in the vote on July 1, as, first of all, it does not allow citizens of the Russian Federation to freely and independently express their will and does not guarantee honest and reliable results, and in addition, the current Constitution of the Russian Federation was also adopted unconstitutionally, as a little more than a third of the voters voted for it and it was the consolidation of the coup d'état, committed by Boris N. Yeltsin and his accomplices in October 1993 as a result of the execution, by the use of tanks and other weapons, of the legally elected Supreme Council and the violent dispersal of the Congress of People's Deputies.

However, this is clearly not enough, especially given the police arbitrariness in the country and the information blockade of all those who disagree with the "redrawing" of the Constitution in the interests of a narrow group of people, covered up by the false and insignificant introduction of amendments to the inseparable voting package that supposedly will ensure legal, social and other progress in the interests of ordinary people. The ASS is confident that only a new policy in the interests of the working people and in the true interests of the country, a new people's power and, accordingly, a new people's Constitution can and should become a full-fledged answer to the "authorities". This is a long and difficult journey, requiring responsibility, perseverance, wisdom, courage, resilience and will. But there is no other way and it is necessary to start a real movement along this path, and the sooner the better. Therefore, the ASS invites all responsible, thinking and active citizens who are concerned for the fate of the country, the fate of their loved ones and the fate of all their compatriots to go this way, despite all the difficulties and dangers that lie ahead.

As a first step along this path, the starting point and the point of assembly of the self-organization of citizens, the ACC invites citizens themselves to implement their constitutional right according to Article 3, including paragraph 2, of the Constitution of the Russian Federation - "The people exercise their power directly, as well as through state authorities and local authorities," - the right to directly enforce this article, strictly in accordance with this article, by a voluntary, free, and independent expression of their will, by filling in the Bulletin against amendments to the Constitution of the Russian Federation, and, if possible, by printing it, signing and photographing or scanning the signed Bulletin, and then sending the completed Bulletin (attached) and its scan or photo from June 22 to June 28, 2020 via email to ass-su-2017@mail.ru.

The second step could be to unite all those who are willing to move forward on this path. The ASS proposes to hold preliminary consultations of citizens and their associations during July, to create an organizing committee for the Congress of Representatives of Citizens and their Associations in early August, and to hold a Congress of Representatives in late August (de facto the first new people's deputies), at which to sign the Public Agreementon Cooperation, on the development of the Program for the country's exit from the crisis- a minimum program for united citizens of Russia and on the development of a draft people's Constitution. Please send your consent, questions, suggestions and comments by July 22, 2020 to: amo.spb@mail.ru

The third step may be the implementation of the decisions of the Congress.

The ASS is only one of the associations of citizens and is not able to ensure the implementation of the second and third steps alone. But the ASS is ready for interaction if among the citizens of Russia there are those who are ready to go along the path of liberating the country from the power of the new domestic and foreign capital! It all depends on you, citizens of Russia!

Bulletin of the will of a citizen of the Russian Federation

against the amendments to the current Constitution of the Russian Federation

Name of the place of residence (city, settlement, village)