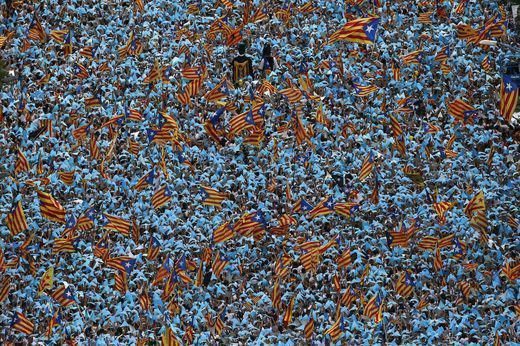 The results of the early regional elections of 27 September have aggravated the most important political crisis of the last forty years in the Spanish state.

Arthur Mas, president of the Generalitat de Catalunya called an election with a plebiscitary character after three years of impossibility of finding a way out for the aspirations of Catalonia, repeatedly denied and fought against by the government of Mariano Rajoy and the state apparatus.  If the pro-independence forces were to gain the majority, the new Catalan government would start a process of “disconnection” from the Spanish legal system, culminating in the declaration of independence and the approval of the constitution of the new Catalan Republic.

The clearly exceptional nature of these elections was denied by the Spanish government and the parties against the process towards sovereignty. Without a doubt, a series of facts are incompatible with these forces’ consideration of these elections as simple regional elections. The PP (Partido Popular) sought declarations of support to its position from Obama, the European Commission, Sarkozy, the Bank of Spain, and large Catalan and Spanish companies. Also the bombardment of threats –inevitable exit from the EU, risk of non-payment of pensions, limitations to withdrawal from banks- against the Catalan people does not look exactly like an aspect of an ordinary electoral debate. On the other hand, nearly all parties have adopted a clear position regarding independence. Finally, extraordinary participation in the election –nearly 78 per cent, ten points higher than 2012- shows its exceptional character.

Pro-independende majority in parliament, but no majority of votes

Although the pro-independence forces obtained the absolute majority of deputies in the Catalan parliament, they were not able to get the majority of the popular vote. The unprecedented participation in the elections -along with the not exactly proportional electoral system- explains these results. Thus, the pro-independence camp got 47,7 per cent of the vote and 72 of the 135 deputies in parliament.

Shortly after the local elections of May, Artur Mas achieved the goal he had been seeking for months: the formation of a large pro-independence unity list. The coalition that has dominated Catalan politics since 1980, CiU –Convergència i Unió, Convergence and Unity-  was clearly defeated in May; the pro-independence center-left, ERC -Esquerra Republicana de Catalunya, Republican Left of Catalonia- advanced powerfully and appeared as the successor to CiU in the leadership of the pro-independence movement. In addition to that, the results of the united candidates of the left challenged the hegemony of Catalan nationalism. Mas was in need of neutralizing these menaces in order to continue to lead the political process.

Junts pel Sí  –United for Yes-, gathered Convergencia Democràtica de Catalunya –the party of Mas-, ERC, two pro-sovereignty social movements and many pro-independence elements. Unió Democràtica de Catalunya –the other party of CiU- rejected the agreement and reaffirmed its character as a party that is not in favor of independence.  They are in favour of self-determination but with the goal of a confederation with Spain. Also the left wing of the pro-independence movement, the Candidatura d’Unitat Populat, (Popular Unity List), rejected joining this front.

A considerable section of the new voters opted for unionist candidates and, in particular, “Ciudadanos” (Citizens), which got second place in terms of the number of deputies, replacing the socialists of the PSC and the conservatives of the PP as the biggest unionist party.

The idea advanced to the effect that the partisans of remaining in Spain have gained the majority of votes is clearly false. Another list of candidates that is not pro-independence, “Catalunya Sí que es pot” –Yes, we can, Catalonia- which brings together the reformist left, Podemos and the ecologists and which gained 9 per cent of the vote cannot be considered as part of the so-called unionist majority. They support the idea of a referendum for self-determination and in this alliance there are supporters of a federation as well as supporters of an independent Catalonia.

It is impossible to predict what will happen in the upcoming period. Junts pel Sí can receive the support of the ERC for the election of Mas as president only by taking the way of undertaking the creation of an institutional structure targeting a rupture with the Spanish state. In this case it will find the juridical and repressive apparatus positioned against itself with the constant threat of the suspension of autonomy.

Only a change in the Spanish government in the elections of December might create the possibility of negotiations. But this would clearly not include self-determination or an authentic referendum in which the Catalans could decide on their future. The only parties that accept this possibility, Podemos and Izquierda Unida (United Left) are far from achieving a potential majority in  the Spanish parliament to allow the necessary constitutional reform. The social-democrats of the PSOE are categorically against this possibility. The federal reform of the state –which is on the program of the PSOE- or special privileges for Catalonia –more funding as well as recognition as a nation within the institutional order-, object of resistance on the part of the PP and Ciudadanos, as well as the PSOE, are improbable directions.

Without a genuine referendum, before or after the institutional rupture, even vast sectors of the pro-independence movement question the legitimacy of a unilateral declaration of independence.

The extraordinary process of political recomposition in Catalonia, a process that affects all social classes, is continuing. Mas and the nationalism of the center-right have lost substantial support among the Catalan bourgeoisie, afraid of the consequences of the rupture. The medium bourgeoisie, the petty-bourgeoisie and the Catalan nationalist middle strata-professionals have doubtlessly chosen separation and are leading a powerful pro-independence popular movement which is unequivocally stronger now as regards the number of supporters and its representative character. This is a mass movement the like of which has never been seen gaining such a force in the history of Catalonia. In the big working class regions of Barcelona and Tarragona, the social-democrat center-left and the reformist left have been replaced by Ciudadanos, an inter-classist, pro-capitalist party with right populist features. This party is against self-determination.

Only the appearance on the stage of the working class and the popular sectors with an independent policy can provide a perspective to the movement and neutralize the advance of reactionary forces. The progress of the CUP confirms that thousands of workers and young people are seeking an alternative leadership. The program of the CUP is certainly unsatisfactory from an anti-capitalist, socialist and internationalist perspective. Its insistence on the role of the working class and the other popular strata as the protagonist, rejection of the payment of the debt, the EU and the euro can be, without a doubt, a valuable basis for the CUP as a point of departure  and to effectively build a policy independent of the bourgeoisie and the petty-bourgeoisie. The alliance with the class-oriented left in the rest of the Spanish state to initiate a reorganization process of the popular forces in opposition to the government, the Monarchy and the EU is the only way to achieve the full sovereignty of Catalonia and a change in the balance of power throughout the Spanish state so as to open a horizon of liberation and reorganization of society. Only then can a sovereign Catalan Republic freely decide on its relation with the rest of the peoples that form the Spanish state.

The author is based in Barcelona, Catalonia.