The Battle for the Referendum in Greece (5) 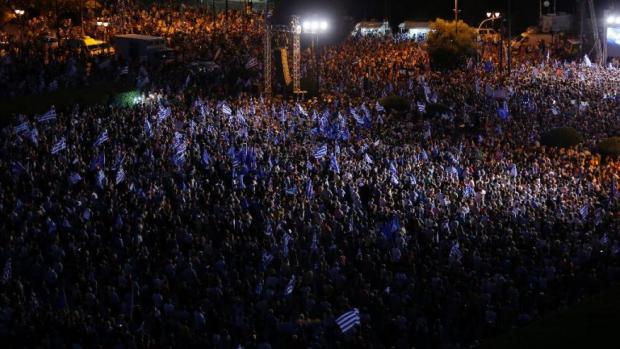 The biggest mass rally that Athens has known since the fall of the dictatorship in 1974, took place today, the last day of the political campaign for the Referendum of July 5, in defense of the NO to the ultimatum of the troika. It was comparable, if not larger than the mass rally in February 12, 2012. That earlier rally was called against the PSI, the so-called  ‘Private Sector Involvement’ - the “haircut” of foreign debt, particularly to private lenders, combined with new draconian measures of austerity - carried out by the extra-parliamentary Papadimos government that had been arbitrarily imposed on Greece by the EU in November  2011.

In 2012  about one million people assembled in  Syntagma Square and  all the streets leading to it but it was dispersed  early, by about 6 pm,  through an unprecedented  and brutal offensive  of the repressive force  of the riot police using  a gigantic  quantity of chemicals.  This time new masses of people, the great majority youth, continued to come nearly up to midnight. To go from the exit of the Metro Station of Syntagma to the point in the Square where the contingent of the EEK was assembled,  a distance of no more than a hundred meters, took about an hour.  At the same time, the gathering of the reactionary pro-EU forces of the Greek “EuroMaidan” in the Stadium was at least 15 times smaller, a fact that even the German State Radio Station Deutsche Welle had to admit. It was an enormous blow to the  vast counterrevolutionary “united front” built by the imperialist troika, the international mainstream mass media, and nearly all the bourgeois  forces in Greece itself, including all the  failed  prime ministers of the last 20 years (Kostas Mitsotakis, Kostas Simitis, Kostas Karamanlis, George Papandreou, Papadimos). Gigantic resources are being used in a propaganda campaign for a victory of the Yes and the overthrow of the current government to be replaced by a servile “national unity” government of stooges.

Various reasons prevented me from going to Patras today to another meeting of the EEK in defense of the No (another comrade replaced me as a speaker).  Thus, I could participate personally in a historical experience unique in the decades of my personal involvement in the workers movement and the Left, including my 45 years in the EEK.

It is not only the impressive  magnitude of the rally  but above all its political  quality,  which show its  importance in the battle for the Referendum, and  for its aftermath, whatever the result.

Until yesterday night everybody thought that the unprecedented international and national campaign of intimidation and disinformation had finally achieved its goal:  a majority  for the Yes, at least  according to the polls.  Even within Syriza and the right wing Independent Greeks there were movements of renegades to impose a cancellation of the referendum, as all the leaders of  global finance capital demanded.  Why they were so afraid of an electoral procedure  taking place quite  often in a dying European parliamentary democracy?

They were not afraid of the always vacillating and weakened Tsipras government, which, until the last moment, is begging for an agreement on austerity terms. What the imperialist institutions and the ruling classes in Europe and in Greece do fear is that this particular referendum, in open   defiance of the troika, could  initiate a renewed  eruption of the Greek popular masses themselves in the arena of history.  Anyway, just one week before, Tsipras had declared that he opposed a referendum or early elections. The referendum was not primarily a maneuver from above but a result of pressure from below; it was imposed , not by the so-called left  wing in Syriza's Central Committee, but by the popular discontent and anger against the continuous concessions of the Greek government and the increasing  arrogance of the IMF, the ECB, and the EU.

The Greek government, of course, says that it will use a victory of the No for new negotiations that already are rejected out of hand by the troika.  The unpredictable factor was again the fighting masses as protagonists of historic change.

From the times of Baruch Spinoza, we know that fear is an indispensable essential method of class rule. But this method has its own limits as many dictators found out, above all the Czar Romanov.  The first and most powerful weapon of intimidation was the closure of the banks after the blunt decision of the ECB to   cut the  life line to the Greek banks (the ELA), a decision that was directly responsible for the long queues of pensioners in front of  ATMs.

There are still some petty bourgeois strata that are frightened of losing the little that remains to them and have a superstitious faith in the fallen gods of the EU and the Euro. They are abused by the ruling class, which has revived all the old anti-communism and the spectres of the  civil war, while they prepare for  a new civil war. They are blaming the ‘communists’ in the government even as they are pretending  that they are trying to avoid  a new civil war  and secure social peace and “national unity” between the butchers  and their victims.

But there is a huge part of the pauperized Greek people that has nothing to lose anymore.  Not by accident, yesterday,  our  comrades of the EEK in Larissa organized a powerful 5,000 strong march in the streets. Working together with others from the Caravan of Struggle and Solidarity  (an organization initiated by the workers of the VIOME factory and radio and television station ERT 3, both  occupied for 2 years and run under workers control) they marched with an EEK banner at the front calling  for “all production and all power to the workers” and also displaying the famous dictum by Walter Benjamin  “Hope was given to us  for all those who lost hope”.

Fear cultivated by the rulers can sometimes be transformed and act as a boomerang against them.  After five years of descent into a hell, the most oppressed and most combative layers of workers, both employed and unemployed, and above all the young  generation are  entering into a   path of new rebellions,  a transition towards social revolution.

were youth, mainly  without a job and without hope of finding a job. A sign for a revolutionary future that arrives always unexpected.