Annul the capital punishment sentences of the three Iranian rebels! Stop torturing suspects! Free all who participated in the November people’s rebellion! 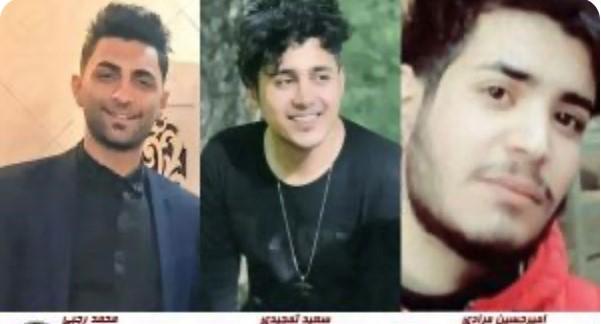 Last November Iranian people took to the streets to protest against the rising cost-of-living and were then soon after repelled by the harsh reaction of the Islamic Republic. Hundreds were murdered and thousands detained. They faced decades-long prison sentences and many of them committed suicide out of desperation. Overwhelmingly young people, the detainees were forced to confess under torture to crimes they had not committed. The Islamic Republic assumes that the uprisings were organized and coordinated by the opposition abroad and forced confessions to this effect. Most of the detainees cannot even afford a lawyer and their families are too scared to challenge the procedures. Official sources state that around 400 young people between the ages of 19-25 are imprisoned in Tehran prison.

The harshest judgments were given last week and three young people (Amir Hosein Moradi and Mohammad Rajabi of ages 25 and Said Tamjidi of age 27) were given the death sentence by the Islamic Revolutionary Court. Their crimes: “damaging public property” and “forcefully taking a video camera from policemen”. Allegedly the camera was taken forcefully using a stun gun. The reality is that these young people are claimed to be connected to the Mujahedeen, the armed opposition that is used by the US as a spearhead against Iran. The convicts later told their families that the confessions were extracted under torture and that they are not a member of any organization. It is not the first time the Islamic Republic tried to extract confessions using torture: in a similar case, the striking Heft Tepeh workers were also tortured to confess that they were in contact with left organizations abroad and these so-called confessions were broadcast on television channels.

The Islamic Republic claims that these three young people are the leaders of the movement. Again, according to official announcements, 180 such “leaders” are in prison now. The only evidence given by the courts are the social media messages of the convicts, stating their willingness to resist police repression. In short, the courts are unable to produce any convincing evidence. Two out of these three young people tried to escape to Turkey as refugees, after learning about the arrest of their friend; but the Turkish police soon arrested them and extradited them. For this reason, they are facing additional charges (on top of the death sentence!) of 10 to 15 years in prison and 74 lashes.

The political parties, organizations and intellectuals whose signatures are below unswervingly oppose the politics of the Mujahedeen and consider that organization to be serving imperialist interests. However, as the Iranian regime has in the past used false evidence and in the case of the three youth now the flimsiest evidence is provided for the allegation of connection to the Mujahedeen, we do not consider the claim serious. We demand the immediate annulment of the death sentences, a stop to the torture of other detainees and convicts and the release of all suspects. These people stood up against poverty, corruption and exploitation of the capitalist system. This is a mass movement that quickly spread to the 29 provinces out of the 31 in Iran. The people’s rebellion cannot be prosecuted!

The surest way to fight against these injustices is to organize inside the masses of working and toiling people. We support all initiatives in this direction and condemn the Iranian government’s brutal attempts to suppress the organization of working people in Iran.