75 years on, barbarism is coming back 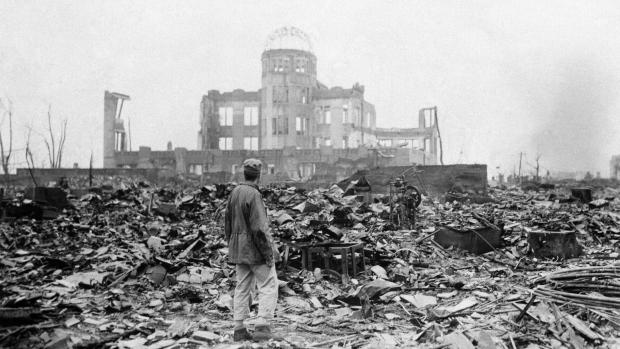 75 years ago, at the end of the Second World War, the USA dropped two atomic bombs, one on Hiroshima and one on Nagasaki. For the first time in history and once only so far, humanity thus witnessed the use of nuclear weapons in a war. The nuclear attack organised by US imperialism led to 360 thousand casualties and an enduring impact of radiation on the whole population for decades. The US carried out this massacre even as the defeat of Japan was a foregone conclusion at this point towards the end of World War II. The cities of Japan had been devastated by numerous bombardments up until 9th August. In particular, in the attack that went down in history as the Tokyo Bombardment (10th March), American war planes targeted the civilian population directly, using Napalm bombs. On that occasion, when 220 thousand homes were destroyed, approximately 7,500 people were murdered.

In order to legitimise the nuclear massacre of Hiroshima and Nagasaki, US imperialism contends that this was done with the aim of ending the World War and thus saving many more lives. The truth of the matter is totally different. US imperialism dropped the bomb in order to threaten the Soviet Union, which had already taken Berlin by totally overwhelming the Nazi army, and the ascending revolutionary movements in Europe and Asia. In other words, it did this to prevent the second wave of world revolution, following on from the first wave set off by the October revolution.  The crimes of Japanese imperialism throughout the Second World War cannot provide an excuse for US nuclear terrorism and this attack should really be considered as an aggression on all the peoples of the world personified in this case by the people of Japan, massacred in their hundreds of thousands and grappling with diseases that spread over many generations.

Each year, around the time of this horrible event generated by imperialist war, an international anti-war meeting is convened in Japan. Thousands of people get together in events held first and foremost in Tokyo, but also in other cities such as Okinawa, Osaka, Sapporo, Nagoya, Kanazawa, and Fukuoka. DIP (the Revolutionary Workers’ Party) of Turkey has sent a message to these meetings held on 2nd August this year by the Japan Revolutionary Communist League (Revolutionary Marxist Faction), the Antiwar Youth Committee and Zengakuren (All-Japan Federation of Students’ Self-Governing Associations), stressing that the threat of a world war has increased once again. We are publishing this message below.

i come and stand at every door

but no one hears my silent tread

i knock and yet remain unseen

i'm only seven although i died

in hiroshima long ago

i'm seven now as i was then

when children die they do not grow.

I’m knocking on your door...

Aunt, uncle, give a signature...

So that they may live and grow and laugh and play.

Three quarters of a century after Hiroshima and Nagasaki, the world faces the possibility of a new world war. The most central issue of this war is the encirclement, isolation, and containment of China and Russia. These two countries have become powerful states thanks to the socialist revolutions and construction processes they experienced in the 20th century. The main aim of imperialist forces of USA, EU, Japan and their allies is to bring down these two countries to their knees, in order to keep them away from posing any danger.

From the tug-of-war over the South China Sea and the delicate balancing act regarding North Korea, the discordances expanded to a spectrum of areas that include the trade war between the US and China and the subsequent move of the Taiwanese bourgeoisie towards a national particularism. The US launched sanctions on the pretext of Chinese policies in Hong Kong and Xinjiang. Hong Kong is, first and foremost, a colonial question. The sovereignty of China over Hong Kong cannot be questioned on the basis of the political regime of this island that rightfully belongs to China. Furthermore, US imperialism took new measures to cut Chinese technology companies off from American engineering skills. The crusade against the 5G development of Huawei is unprecedented in the annals of technology. India’s Modi, who brought down his mask to reveal his Hindutva fascism increases aggression on the border with China due to the encouraging of imperialism. Within this context, the coronavirus pandemic that broke out in Wuhan is used by another affiliate of fascism, Trump, to slander China.

A renewed bout of tension with Russia is also not to be excluded. Despite the ambiguities of Trump’s policy regarding Russia, it should not be ignored that NATO is still a war machine that targets first and foremost this country of great military capability, in particular in the field of nuclear power.

However, the dynamics of this war are not limited to the areas of conflicts with Russia or China. The imperialist and Zionist ambitions and sectarian wars in the Middle East, as well as contradictions and conflicts in Africa, can trigger the outbreak or spread of a world war. In the Middle East, the impasse created in Idlib puts Turkey, a member of NATO, and Russia on opposite trenches. Saudi Arabia, the United Arab Emirates, Egypt and other reactionary Sunni Islamic states are brought together in an alliance that includes Israel against Shia Iran and its allies in the region. The objective of the imperialist camp is to put an end to the threat that Iran poses for Israel and to bring down the foremost ally of Russia and China in the Middle East.

In the Eastern Mediterranean, the alliance between Israel, Egypt, Greece, the Republic of Cyprus, and others based on newly discovered sources of natural gas, has fallen out with Turkey, which claims that it should have a say over these resources because of its own rights and those of North Cyprus. Behind General Haftar of Libya, is a large counter-revolutionary imperialist-Zionist array of forces including France, Egypt, Saudi Arabia and the United Arab Emirates.Sarraj’s GNA and supporters as Turkey and Qatar, too, is not meant to defeat imperialism but to seize Libyan oil. The United States takes one or the other side depending on the concrete situation, with Britain standing silently behind Turkey. Here again Turkey and Russia are at odds.

The Zionists having been emboldened by Trump’s “deal of the century” andthe US provocation concerning the status of Al Quds/Jerusalem, now prepare to announce annexing some parts of the Jordan River Valley and of the West Bank that they had failed to usurp in 1948 and 1967.

Behind these escalations lies the capitalist world economy prone to deepening contradictions under the influence of the Third Great Depression since the great financial collapse in 2008.The Coronavirus pandemic has, moreover, ignited the explosion of all the unresolved contradictions of the global capitalist crisis. In its essence, the pandemic has shown that capitalism has now proved to be incompatible with the most urgent needs of the life process, a historical obstacle that only the world socialist revolution can and should overcome.

As should be expected, this capitalist crisis also gave rise not only to a possibility of a new world war and fascism that can bring about greater disasters than the past, but to what we call the third wave of world revolution. This was started with the Arab Revolution in 2010-11. And today, it can be traced from the numerous mass movements emerged all over the world in the form of rebellions and revolutions in the last two years. Those include but are not limited to Sudan, Algeria, Lebanon, Iraq, Iran, Chile, Haiti, Puerto Rico, Ecuador, Catalonia, France and lately USA.

Struggling in a country surrounded by wars and revolutions, under the squeezing grasps of despotism and imperialism, Revolutionary Workers Party, the DIP, expresses its solidarity with the organizers and attendees of the 58th International Antiwar Assemblies in Japan.

Our fight is to bring down the despotic regime in Turkey, the enemy of the workers and the oppressed, by uniting the struggle for bread and freedom. Our fight is to pull Turkey out of NATO, close all imperialist bases in the country, to cut all economic, military, diplomatic, cultural and academic ties with Zionist Israel and to kick imperialism out of the Middle East, for a Socialist Federation of the Middle East and North Africa!

We have to act together for the sake of the world revolution by organizing the working class in the revolutionary parties at the national level and at the international scale in a revolutionary international, both to resolve the global economic crisis in favor of workers, toiling masses, the poor and the oppressed, and to protect humanity against the danger of destruction by fascism and in a new world war.