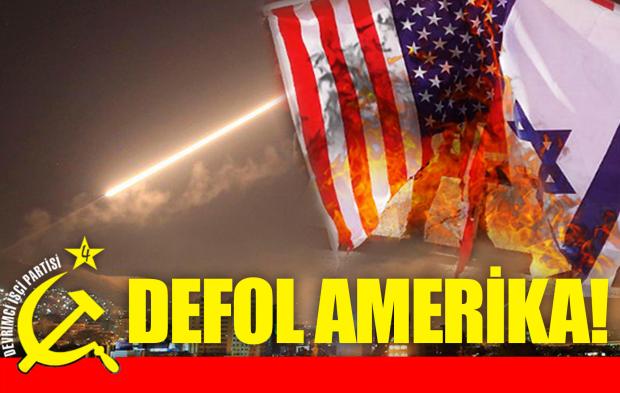 The missile attacks to Syria on the dawn of April 14th by the imperialist countries led by the United States, is an act of barbarism. Missiles were fired to Damascus, Homs, Hama, Daraa and Al-Suwayda because this assault suits with the interests of American, British and French imperialists and was also requested by the Zionist Israel. The claim that these attacks were performed in response to the alleged chemical massacre in Duma is a huge lie.

Missiles are the imperialist signatures of the chemical provocation!

Before today, the claim of the use of chemical weapons in Duma by the Syrian government was in a hopeless search for proof. However, after rejecting every international investigation initiative intended to clarify the allegations, the imperialists, who hit Syria without any concrete evidence, have already put a signature under the chemical provocation in Duma. Tomahawk and Shadow missiles, which hit Syria, are not the price of the chemical massacre but the price of the Israeli fighter jet shot down by Syria on the 10th of February and afterwards the expulsion of the sectarian bands of imperialist and Zionist collaborators from Damascus. Imperialism wants to revive the Geneva process which has lost its credibility and impact at Syria. The imperialists are trying to exert their authority at the negotiation table with the power of their armies and their navy because the gangs they used as subcontractors are defeated.

The imperialist chorus, lead by Trump with threats and insults, threw more than a hundred missiles and tried to intimidate not only Syria but all the Middle Eastern peoples. In this sense, even though we do not line up politically with Assad or the forces that support his regime, we are in full solidarity with the Syrian people against this threat and we regard this attack as being made to all the peoples of the region. We are pleased that Syrian air defence systems were effective against missiles and also pleased that Syrian casualties are limited, contrary to American propaganda. Formal passages with their aircraft carriers, destroyers, warplanes, smart missiles and their fierce attacks cannot hide that imperialism is a force that is weakening and in descent.

Imperialism in its death bed sustained by collaborationists

However, declining and weakening imperialism will not end up in the bottom of the grave by itself. Imperialism in its death bed still holds a military power that can bring unparalleled catastrophe to the peoples. Even though these recent attacks remain limited due to both the decay of their chemical attack claims and the threat of Russia’s retaliation; it should not go unnoticed that the imperialists have made a fully imperialist buildup in the Eastern Mediterranean.

An important basis to this imperialist siege is the collaborationist governments in the area. These are led by Saudi Arabia who gives full support to the assault. Cyprus once again functioned as an unsinkable aircraft carrier with the Akrotiri and Dhekelia bases of the British. While the ruling classes of Cyprus and their Greek and Turkish custodians have been bickering with each other for years, they have excluded only the existence of these bases from the negotiations. That is why they became the partners in all crimes committed through these bases.

Support of Erdogan and AKP government to imperialism is shameful

Unfortunately, Turkey also gives support to this imperialist aggression. The fact that the Incirlik base was not used in the last attack does not change anything. Planes departing from Incirlik have been bombing Syria regularly for years. American generals also often speak of Turkey’s cooperation in glowing terms. However, in recent attacks, Turkey’s support has gone beyond the utilization of bases. The US did not need İncirlik to attack Syria in an area where it has a buildup of aircraft carriers; but it needed a humanistic cover for its imperialist aggression. The political power in Turkey by unanimous agreement of all levels of government starting from Erdoğan has rushed to the aid of imperialism and become mobilized in order to put a humanistic cover to the aggression with words such as: “we see this as a positive step” (Binali Yıldırım), “this action was the voice of consience” (Turkey Ministry of Foreign Affairs), “it was unthinkable that the Syrian regime would be left unanswered” (President spokesman İbrahim Kalın) and “the murderers of innocent people should long have been called to account” (Recep Tayyip Erdoğan).

Fraternity of the peoples against Zionism and Imperialism

The ruling classes and collaborationist governments are at the same alignment behind imperialism. We, on the other hand, are on the same front with the Turkish and Greek Cypriots and the working class of Greece in the fight against NATO, for the closure of imperialist bases and the expulsion of foreign troops. We are not with the collaborationist Arab regimes, especially with Saudi Arabia, but with the Palestinian people who resist the Israeli piracy and the Arab world, which is full of righteous anger against imperialism and Zionism. We extend a hand of equality and fraternity to the Kurdish people against those who abuse the oppression of the Kurdish people for their own dirty plans. We are the ones saying "peace with the Kurds, war with the USA".

Turkey out of NATO, shut down Incirlik!

It is disgraceful that when it comes to supporting the interests of imperialism, Turkey stands in alignment with Greece and Saudi Arabia, the countries with which it conflicts on Cyprus and Middle East subjects respectively. This situation should be an occasion for the people to wake to the lies that are told to themselves. No matter what collaborationist governments do, the working people of the Middle East and the Balkans must make their choice of fraternity. While they support imperialist aggression and become partners with it, our duty is to raise the struggle for Turkey’s exit from NATO and the closure of all imperialist bases, mainly Incirlik.

Down with US imperialism!

Trump, in a social media message that he sent before firing the missiles, talked about the success they obtained against DAESH, and he said, "Where is ‘thank you America?” As the missiles were fired in succession to the Syrian territory, the collaborators lined up to kiss their master's hand. They do not represent the working people of these lands. Because we have one statement to make: “YANKEE GO HOME!”