Working-class and rural Latin America against the IMF’s austerity 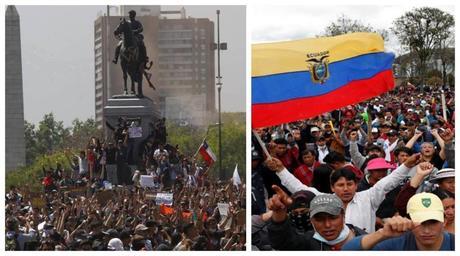 The working-class, student and rural Latin America is rising up. We have entered a new period dominated by strong rebellions against brutal austerity policies and the governments that impose them.

Ecuador and Chile are testimony of this tendency, which had already been underway with the revolt against President Ortega’s austerity measures in Nicaragua and with the revolutionary days in Haiti against huge service rate hikes.

These struggles have forced these austerity policies to be withdrawn -compelling Ecuador’s president Lenin Moreno to render the decree raising oil prices void and pushing President Piñera in Chile to cancel the Metro fare rise- and have weakened these governments which have resorted to strong repression against the people. Piñera has militarized the Chilean capital, Santiago, and many provinces, he has also decreed a state of emergency and a curfew. The regime of a Pinochetist democracy reacts, and thus becomes evident [Pinochet being the leader of the long-lasting coup d’état]. According to information put out by the government itself there are 15 casualties, 84 injured and 2643 arrests. Rapes and torture have been denounced, but the repression has fanned the flames of rage and protests.

The great global capitalist crisis of 2008, which was never surmounted, comes back to center stage. The world economy is rapidly entering a new stage of recession. Latin America is in the eye of this storm. According to the predictions of the United Nations’ Economic Commission for Latin America and the Caribbean (CEPAL) and the IMF, Latin America’s growth will be 0.3%.

This is a direct consequence of the fall in raw material prices (soy, oil, minerals, etc.), which are Latin America’s main exports. It is also due to the halt in world commerce, aggravated by the trade wars between the US and the European Union with China, and to the increased cost of credit and the capital flight from our countries to the imperialist metropolis. And on top of all this, the onerous weight of the foreign debts, which constitute a mechanism of national oppression and confiscation to the people, in order to salvage the banking system by means of usurious interest rates.

We are faced by the exhaustion of global capitalism. Capital intendends for the crisis, which it itself has generated and of which it is responsible, to be paid for by the workers and exploited people of the continent.

The rate hikes and privatizations of public services go hand in hand with the attempt to impose labour and pension reforms which are against the working class and reactionary. They are aimed at flexibilizing jobs, extending workdays, abolishing extra hour and category payments, reducing holidays and social licences, etc. The result is not only super-exploitation (people work more), but also alarming unemployment and subemployment. They also push for an extension in retirement ages and reducing the sums of pensions, and for the pension system to be upheld only by the working class, through the forced saving of their contributions.

The ‘model’ for the continent’s capitalists is the Chile created by Pinochet’s bloody dictatorship. The pension system is private there (AFP) and the sums paid are minimal; education is fee based, the health system is definanced and water services are private; national and industry level labour statutes are forbidden, and the labour movement is balkanized: industry level unions and statutes do not exist, making the bosses’ impositions easier.

The Chilean rebellion on the road to a general strike

The thing is this ‘model’ has blown up at the hands of the leading intervention of young people, which is extending to all the layers of the working-class population. Only weeks ago President Piñera said that his Chile was “an oasis” in the desert which is the Latin American crisis. An ‘oasis’ of capitalist super-exploitation! This is due to the fact that Chile suffers the same problems as the rest of Latin America: the fall of copper prices, deceleration of its economy, the huge weight which is the payment of interests of its foreign debt. The country must pay… 60 billion dollars of foreign debt within a year!

The uprising of the Chilean people was preceded by huge struggles against the post-Pinochet regime: massive demonstrations by the ‘pingüino’ students against the imposition of fees, for free education; huge protests of working-class families against private pensions (one million people in 2017!), for a state-run system and a decent pension; strong strikes of miners, port workers, Walmart workers and teachers, to fight against the anti-union legislation from Pinochet’s times and to recover victories which had been stolen from them; rallies of the Mapuche native people against the expulsion from their lands; etc. All this history of struggles is having a first culmination in this great uprising and its tendency towards a general strike against rate hikes, for the recovery of historical achievements of the masses, and to oust Piñera’s anti-worker government.

Down with the repressive and anti-worker governments

The IMF austerity policies have been undertaken by governments which call themselves right-wing like Macri’s in Argentina or Bolsonaro’s in Brazil, but also the ‘national and popular’ ones such as Lenín Moreno in Ecuador, the Sandinist Ortega in Nicaragua, Evo Morales in Bolivia and the Frente Amplio in Uruguay.

Therefore the order of the day, from Uruguay to Ecuador, from Brazil to Chile, is the slogan we have been upholding: THE CAPITALIST CRISIS MUST BE PAID FOR BY THE CAPITALISTS. The enslavement to the IMF and the current capitalist ‘solutions’ are incompatible with the people’s needs. The sacrifices and hardships to which they have subjected the people, however, have not avoided the Latin American countries to go into bankruptcy and default. As we have always upheld: the debt is untenable and unpayable. Therefore the following becomes necessary: to defeat and put an end to the regimes responsible for this calvary and to make way for a political way-out in which the exploited people are the protagonists. We fight for workers’ governments and the socialist unity of Latin America.

In Chile the protestors shout: down with Piñera. In Ecuador they also demand: down with Lenín Moreno. The struggle against austerity governments must be linked to an integral program in order to surmount the crisis: breaking ties with the IMF and the non-payment of the debt, nationalization of public service companies and those which generate the national income (oil, gas, mines, etc.). It must also include rejecting the devaluations and capital flight, nationalizing the banking system and foreign commerce. In Chile’s case, key aspects of the policies imposed by Pinochet’s regime are still in place. It is in fact a democracy formatted by Pinochet and an economic regime shaped by the dictatorship, which was perpetuated by the center-left governments of the ‘Concertación’ and the right-wing Piñera administration. This is summed up by one of the Chilean rebellion’s slogans, justifying the popular uprising: “It’s not 30 pesos (the Metro fare rise); its 30 years (since the dictatorship ended)”. This puts a sovereign Constituent Assembly at the order of the day, aimed at removing and putting an end to the inheritance left by the Chilean dictator and taking all the steps towards an integral transformation of the country upon new social bases. This undertaking can only be the work of the workers and must be enforced by striking and popular demonstrations.

If the rebellion has not been able to grow even further, it is due to the fact that it has been blocked by the actions of the union bureaucracies interlocked with the bosses and governments. The Argentine General Confederacy of Work (CGT) contained our combative labour movement so it wouldn’t defeat Macri’s austere policies. The Brazilian CUT has allowed Bolsonaro’s labour and pension reform to pass with minimum resistance.

It is necessary to recover the organizations of the masses, firstly the unions, ousting the bureaucratic sellouts. It is also paramount during the present struggle to build all kinds of organisms (strike committees, etc.) which can coordinate this fight and lead it to victory. Congresses of the unions’ bases and the struggling masses must be called for. Revolutionary workers’ parties must be built. The bourgeois nationalisms of Maduro, Lula, Evo Morales and the Kirchners have been incapable to provide an anti-imperialist exit to the crisis, and have ended up becoming, sooner or later, instruments of the reaction or roads towards the right wing. The same goes for the popular fronts which, such as the cases of Uruguay and the Chilean ‘concertation’, have only been instruments of the containment of the masses’ struggles. All our peoples are in a common fight: for the socialist unity of Latin America.

All our support for our working-class brothers of Chile. Freedom to the prisoners, down with the state of emergency, removal of the curfew, for the dismantlement of the repressive Pinochet era repressive forces, down with Piñera. Long live the general strike which is underway in Chile!