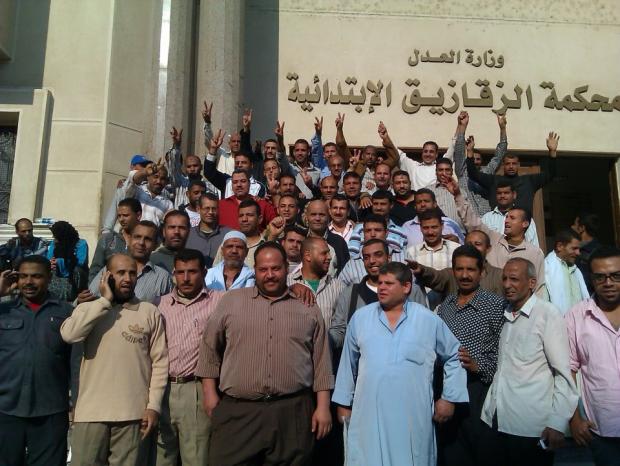 The revolutionary tissue of the Mediterranean is being woven in ever tighter knots. In a new display of the combative mood of the working classes of the different Mediterranean countries, the workers of a steel plant in Egypt (Kouta Steel) sent their greetings of solidarity to the workers of a factory in Thessaloniki, Greece by the name of Vio.Me, which has lately become a self-managed factory.

Vio.Me earlier had benefited from internationalist solidarity from Argentina. The Argentinian section of the Coordinating Committee for the Refoundation of the Fourth International (CRFI), Partido Obrero, had been very much involved in the takeover and self-management of factories by the workers during and in the aftermath of the economic crisis in 2001. In December 2012, during a meeting organised by the Ergatiko Epanastatiko Comma (EEK-Workers’ Revolutionary Party), our Greek section, a workers’ delegation from Vio.Me had the possibility of meeting with the representatives of the PO, who readily informed them on how the Argentinian workers had proceeded. International solidarity thus bore very concrete fruits for the Vio.Me workers.

The reader will find below a piece of news published on the web site MENA Solidarity Network on the act of solidarity carried out by the Egyptian workers of Kouta Steel. We salute both the courage and perseverance of the Vio.Me workers, and the workers of Kouta Steel, who are to be congratulated not only for their own combativeness, but also for the solidarity and the sharing of knowledge they display at the international level.

We would like to share with you our experience and struggle that began about one and a half years ago, during which the independent trade union stood at the forefront of the fight. This included sit-ins and legal battles through the Prosecutor-General’s office and the ministry of labour. The struggle culminated with an epoch-making decision by the Prosecutor-General last August approving their right to place the factory under workers’ self-management and authorising engineer Mohsen Saleh to manage the factory. It is worth-noting that the owner had fled earlier without paying the workers since last March.

The process has not gone free of obstacles and difficulties since then, starting with arduous negotiations with Gas and Electricity companies in order to schedule the factory’s debts which amount to $2.6 million and $0.9 million to both companies respectively. The workers have given a lesson in self-sacrifice as they decided to deduct half their wages to be used in purchasing raw materials (pallets).

We are now taking the final steps to resume the production process after having reconnected gas and electricity. The Kouta Steel Factory workers are all one in heart and mind, adamant to improve the factory and proceed with our experiment till the end.

Though a thousand miles away from Greece, we send our strongest expression of solidarity and support to the workers of Vio.Me and to their newborn experiment in self-management. We also declare our absolute rejection of the austerity measures that affect first and foremost the working class, whether in Greece or here in Egypt.

We invite Vio.Me workers to start and exchange of our experiences in struggle, so that we can benefit from lessons learned from both experiments in self-management. Millions of workers are looking at us as a concrete reality and an awaited dream.

Long Live the struggle of the Vio.Me and Kouta Workers!