What does it happen in Romania? The January 2017 protests (I) 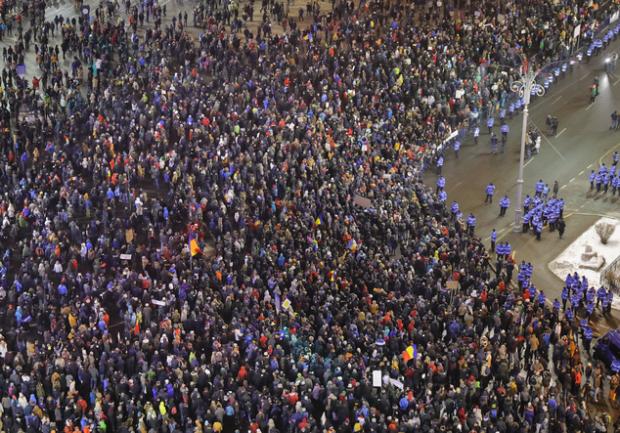 On 18 January 2017, the Government has imposed two projects of Emergency Ordinances: stipulating the pardon of the most important corruptions acts, and abolishing the conflict of interest and the abuse of office as corruption guilt, as well as any possibility of recovery of the material prejudices from the culprits. The two ordinances had, certainly, in view many members of the political “elite” – and this “dedication” has generated legitimate emotions – but people were indignant against the open infringement of the principles of the law which constitute a necessary form of their defence. The law is, obviously (and people understand this), the result of relations of forces, but to annul just the elements which represent the public control over the rulers and allow their punishment is a sign of extreme arrogance on behalf of them.

People began to manifest. Showing a full disdain towards them, the Government has decided, in the night of 31 January to February 1, to transform one ordinance into a project of law to be discussed and easy approved in the Parliament, and to send the other ordinance to be published in the Official Monitor and thus to come into force, at least for the present defendants and delinquents, even if it would be abolished. (This is the provision of the Romanian law).

From the night of 31 on, big crowds of people (about 300 000) have protested every evening not only in Bucharest, but also in many other cities and towns. The protests were absolutely peaceful, but in the night of 2 January, when people began to leave the square in front of the government building, a group of about 30 hooligans came from outside and began to throw cocktails Molotov to the gendarmes. These ones have, first, secured the crowd and then managed to annihilate the hooligans, arresting some of them. Later on, in the night, some young protesters came to the square and cleaned it. Up till now, one does not know who was behind the hooligans.

Yesterday (4 February) in the morning tens of mothers with children came to the square. In the afternoon, the Social-Democratic Party (SDP) forming the Government has announced that it would be possible “to retract” the ordinances and at the same time began to threaten with a huge counter-manifestation of the SDP members brought in Bucharest by train and buses. (But in every city the protesters belonged to that city).

But people continued to flow in the streets and to the square, as in other cities, and in the evening the prime-minister has announced that he will repeal the ordinance. People have continued to stay in the square and will continue until the publication of the abrogation in the official Monitor.

These are the facts until now.

- the SDP is a masked right-wing party; it ruled Romania from 1990 to 1996 and then from 2000 to 2004, and from 2012 to December 2015. It has imposed the dismantling of state property, all the measures favouring the capital, and promotes a wild anticommunism and a conservative ideology, strongly supporting the Orthodox Church with flows of money for the building of thousand of churches (and now, a mega-cathedral) and the “Royal House” that has permanent programmes at the national television. All the other parties have the same politics and messages, austerity measures were not imposed only by some parties but by all of them, including SDP, but the SDP considers itself to being “the left”, once more contributing to the confusion and disorientation of the population. SDP was that which voted immediately in 1990 and then strengthening the anticommunist law forbidding the communist party, ideology and symbols, and even assassinated in 1992 a young engineer working for the constitution of a new communist party.

- The protests were announced on Faceboook etc., some sites are linked to the right, but most people came spontaneously, just because of their exasperation. Though many protesters belong to the so-called “middle-class” young intellectuals working in the many offices of the national or transnational corporations – so having the illusion that the capitalist relations are fine and that only corruption would mar them – the social structure of the protesters is larger. Obviously, it is an urban structure, but its messages against corruption do not reflect only the above illusion, but also a subterraneous opposition to the capitalist relations as such (“from 27 years you destroyed the country”) related to deep moral feelings. In this respect, as said a veteran journalist, “all from the square are left-wing”. So, just in order to keep the appearance of spontaneity, and thus of credibility, the opposition parties did not yet assume the leadership of the protests.

- Therefore, the struggle for power between different layers of the same rapacious, immoral and anti-patriotic ruling class (for state contracts for own “businessmen” and for state leadership positions for own bureaucracy) does not annul the huge problem of the implicit class struggle between the rulers and the ruled.

- In the protests from 2012, the main slogan was “You all (from all the parties) are thieves”. In the present protests this slogan has not yet appeared, but it is not forgotten by a big part of protesters. In other words, many people have a not expressed but deep despair: they sincerely hate the SDP and the present government (an alliance of SDP and a big explicit right-wing party), but they know that they have no alternative in the existing parties. They hated the former governments too. Consequently, either they will surrender to the explicit right-wing parties which possibly will use the opportunity to seize the power, or they will retreat from a future possible movement of the explicit right-wing parties and will be more desperate, more alienated and pushed to be passive citizens.

- Therefore, the protests show the necessity of a consistent left-wing party and organisation of the broad masses. Do not forget, those who did not vote in the last elections in November 2016 were 61%.  And when the future governments will make something too shameless, perhaps they will protest again.

- But today we already know that only the protests are not enough. On the contrary, they may be used from different factions of the ruling clique. And all voices of this clique have insisted that “people have the right to protest”, just for they know that the protests as such are not dangerous for the system when they remain protests.

- Though some ones consider the opposition against corruption as something superficial – being thus a pendant of the right-wing message that if one succeeds to eradicate it everything will be fine – this opposition is extremely important. We certainly have to remember to people – something which they experienced or intuit – that the functioning of capitalism as such involves corruption and that although the punishment of corrupts is absolutely necessary, not the change of corrupt officials with some ones less corrupt is the solution – so not the focus on personages and individuals – but the focus on constitutive capitalist relations. But we must start from the real problems – as the corruption – not from theory.

- Finally: the struggle between the different factions of the ruling class concerns also the alliance with, or rather the subordination of the military and intelligence. All the factions have gifted them with huge wages and pensions, so their leaning to one faction or another is only for more guaranties for their privileges and does not mean any alleviation of the general financial burden put on the back of the many; nor has this bloated bureaucracy  any burst of patriotism by leaning to some ones instead of the others; andthe victory of any faction in its struggle against the other ones from the ruling class does not change the subordinated role of Romania in the capitalist international relations and its ugly future because of this subordination. All factions were and are enthusiastic for NATO and its wars. And though the Opposition represented by the president of the country seems now to support rather the EU in its competition with USA – while the president of SDP went to Washington with the occasion of inauguration to renew to Trump the fidelity commitments – in fact, both factions are in the same proportion anti-Russian and thirsty for the protection of the world capital and its big state forms: even with the price of a destructive war for the world and for the Romanian people. And we must not forget that both USA and EU have for the moment contradictory attitudes towards Russia: they want to use it either as economic partner good for their own businesses or for geopolitical instrument against China.  But all of them are preparing for a war, for more “vital space” for capitalism.