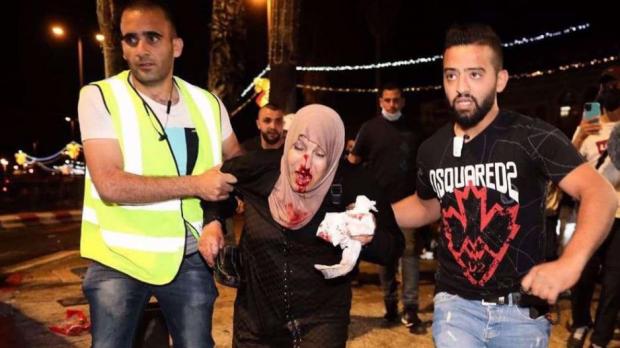 The forces of repression of the Israeli state have joined hands with far-right Jewish settlers and the broader Israeli ethnic cleanser movement to put down the struggle of the Palestinian community of Jerusalem, and in particular of East Jerusalem, to safeguard their homes and their country. As of the posting of this statement, 119 Palestinians, including 31 children, have been reported dead in Gaza under Israeli bombardment, as well as in various Israeli cities (compared with 6 Israeli Jews, including one child). The number of injured Palestinians rise to 830 in Gaza alone.

The talk about “tensions rising during the month of Ramadan” or “complications arising from the celebrations of Jerusalem Day”, established in the wake of the Six-Day War of 1967, when Israel seized East Jerusalem, is taking the symptom for the cause. The true cause of this struggle is the Zionist project for ethnic cleansing of the Palestinian population embodied by the long-awaited decision of the Supreme Court of the settler colonial state of Israel on the eviction of five families living in the Sheikh Jarrah neighbourhood of East Jerusalem. These looming evictions have become the symbolic watershed. That is why the tensions have heightened. That eviction is what the Palestinians are rightfully fighting. They are fighting against ethnic cleansing of Palestinians from al Quds/Jerusalem. And this struggle is what the Israeli far-right settler movement, along with the plastic-coated rubber bullet and stun grenade wielding Israeli state, is trying to put down.

Although the Sheikh Jarrah decision concerns a mere five Palestinian families, it is really the cutting edge of an entire series of evictions that has been continuing in al Quds/Jerusalem for years. This is a street-by-street war over the city. Israel has trampled upon all documents of international law throughout its entire history. It is a veritable “rogue state” in the true sense of the word. Now, moreover, these evictions and the ethnic cleansing that they represent are, as it is admitted even by the Office of the UN High Commissioner for Human Rights, a violation of Israel’s obligations under international law because this law prohibits the forced transfer of residents from occupied territory.

Witness the declarations of two deputy mayors of Jerusalem. This is how the pro-Israel New York Times quotes one of these, Aryeh King: “[T]he deputy mayor, said ‘of course’ they [the evictions] are part of a wider strategy of installing ‘layers of Jews’ throughout East Jerusalem. That policy, Mr. King said, ‘is the way to secure the future of Jerusalem as a Jewish capital for the Jewish people.’”

And this is how the same paper quotes Fleur Hassan-Nahoum, another deputy mayor of Jerusalem: “This is a Jewish country. There’s only one. And of course there are laws that some people may consider as favoring Jews — it’s a Jewish state. It is here to protect the Jewish people.” Blatant racism!

This amounts to admitting that the evictions draw their strength from two decisions of the US administration under Donald Trump, which certainly will not be revoked under Biden. The recognition of Jerusalem as the capital of Israel in 2017 and the support extended to the apartheid legislation, the Basic Constitutional Law of Israel, in 2018, characterising Israel as a racist “Jewish state” and praising “Jewish settlements” as the highest “national value”.

Thus, nothing can be expected from the misnamed “international community” led inevitably by the US and the EU concerning the rights of the Palestinian people.

Nothing can be expected from the reactionary Arab states either. The four countries which, under the goading of Trump, established full diplomatic relations with Israel in recent years (the United Arab Emirates, Bahrain, Morocco and Sudan) have made declarations expressing their “profound concern” about what is going on in al Quds/Jerusalem. They have sunk so deep in moral turpitude that not a single actor will heed their words. These four are only the tip of the iceberg with respect to the betrayal of the Palestinian people by the entire gamut of Arab ruling classes and states, first of all by Saudi Arabia, the Gulf emirates and Egypt.

The mass rebellion of the Palestinian people these days proves again that the occupation of Palestine is at the centre of the so-called Middle East question. The treacherous stand of the Arab bourgeois regimes, including the collaborationist leaderships of the Palestinian people, both secular and religious, reveals their fear that a revolutionary struggle for the liberation of Palestine will necessarily engulf all the region and will overthrow the entire Middle East, already in turmoil. So, they stand in support of the Zionist apartheid state at a moment when the entire Zionist political system and regime face the worst crisis in its history after four  unsuccessful elections in the last four years.

Erdoğan’s Turkey has been pouring words without any corresponding deeds. This is simply for domestic consumption and for persuading the Arab masses that Erdoğan is the only leader in the Sunni world that can challenge the US and Israel in the name of the rights of the Palestinians. His past record regarding the Mavi Marmara incident, where he finally capitulated and normalized relations with Israel –shamefully the normalization agreement was officially signed with the name of the capital cities of the two countries cited as Ankara and Jerusalem!- should tell the Arab peoples of the emptiness of his posturing on the Zionist state. The real task is to end all diplomatic, economic and military links to Israel, to break with NATO and to shut down the Incirlik military base in southeast Turkey, from where the US Air Force strikes all forces in the Middle East it considers to be against US imperialism and Zionism.

In Greece the right-wing Mitsotakis government, as before the so called “left” Syriza government, have built  the strongest military and political alliance with the Zionist regime, the al Sisi dictatorship in Egypt and the Saudi monarchy, under the aegis of imperialism, to promote their common interests in the energy fields in Eastern Mediterranean against the interests of all the peoples of the region and, first of all, against the rights of the Palestinian people. Suda on the island of Crete has been transformed into the biggest US/NATO military base in the region, targeting all the countries of the Middle East and North Africa as well as Iran.

Dismantle all the imperialist bases! Kick out US, NATO and EU imperialism! War against the war of imperialists!

It is up to the organisations of the working class, the revolutionary Marxist movement and the popular anti-imperialist organisations of all countries, but in particular those of the Middle East and North Africa, to shoulder immediately the task of raising concrete solidarity by all means with the Palestinian people. Let us organize marches and demonstrations in front of Israeli embassies and consulates in all countries in solidarity with the Palestinian people in struggle.

Stop the evictions and the ethnic cleansing of the Palestinians of al Quds/Jerusalem!

Fight the establishment of illegal, illegitimate and reactionary Jewish settlements on Palestinian territory!

Down with Zionist settler-colonialism!

For a united, free, democratic, secular and socialist Palestine, where Palestinian Arabs and Jews will live peacefully together with equal rights and dignity over the entire territory of historic Palestine!

For a Socialist Federation of the Middle East!

Friends of Palestine Against Imperialism and Zionism