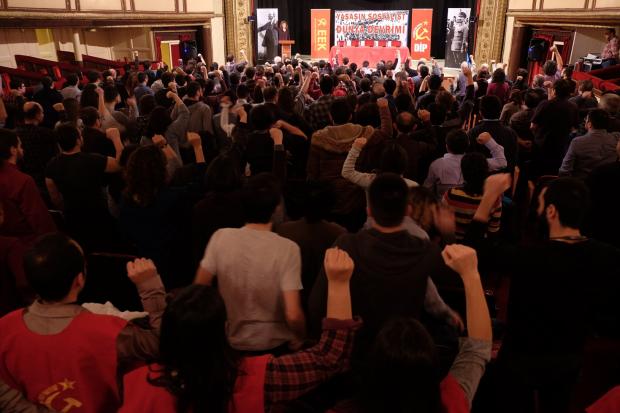 On the 3rd of December, for the centenary of the October Revolution, by the call of RedMed web network and Christian Rakovsky Balkan Socialist Center, those who regard this most advanced breakthrough of humanity as a guide to action came together in Istanbul, Turkey. The whole-day conference lasting from 11 a.m. to 8 p.m., which was attended by close to 400 people filled with enthusiasm, with a certain circulation in its three sessions, was hosted by DIP of Turkey with contributions of EEK of Greece and became a fittingly accomplished activity for the centenary of the October Revolution.

The conference greeted this glorious attempt in abolishing capitalist exploitation through the conquest of power as the essence of that world-historic event. The commemoration stressed that the imperialist First World War was ended by the working class taking power in Tsarist Russia and starting revolutions in Europe, especially in Germany and Hungary, and that, the Second World War was too, ended by the working class through the smashing of Fascism and Nazism by the product of the October Revolution, the soviet state, and the revolutionary upheavals of the international proletariat. A great lesson for today, as the World is on the brink of a renewed threat of a spillover of war by the interventions of imperialism in the crunch of another Great Depression.

The October Revolution which cannot be taken as solely a Russian revolution could only be celebrated by a feast of internationalism. As a revolution of workers even from various nations within the Tsardom including those of Muslim peoples and as a revolution that penetrated its devastating waves deep inside Europe at first and then extended its influence over Asia and in later stages to Africa and Americas, the Great October Revolution should be and was considered by the conference as the prelude for the epoch of proletarian revolutions.

The rich international host of speakers during the conference which were simultaneously translated into Turkish and respective languages included Comrade Iosif Abramson from Party of Russian Communists (RPK), a scientist and a revolutionary militant who struggled against Nazis as a member of the Komsomol in the USSR and became a prominent member of the CPSU also struggling against bureaucracy and corruption, conveyed his experiences and analyses on the history of the Soviet Union. Savas Michael-Matsas, General Secretary of EEK (Workers Revolutionary Party) from Greece; Jorge Altamira, historical leader of the PO (Workers Party) of Argentina; Çingiz Topçiyev, delegate of Socialist Elm from Azerbaijan; Daniela Penkova, Marxist economist running the website Dokumentalni from Bulgaria; Aziz Şah, an author of daily newspaper Afrika from Cyprus also took part in the conference. Tamás Krausz, from Hungarian Marxist journal Eszmelet, winner of the Deutscher Prize with his book Reconstructing Lenin: An Intellectual Biography; Dimitris Mizaras from the Marxist Workers League (MTL) of Finland; Lenka - Movement for Social Justice representative Haktan Recep Ismail from Macedonia; and Yuri Shakhin from the Ukrainian organization Against the Current offered their contributions through video messages as well.

The chairman of Revolutionary Workers’ Party, Sungur Savran made two important speeches, the first being on the historical meaning of the October Revolution and the second on the relationship of the Muslim peoples with the October Revolution. Participants both interpreted the struggles in their own countries and revealed the common aspects of those struggles, as well as giving a historical perspective on the construction of workers states in the footsteps of the October Revolution by the experiences shared from sovietization of Azerbaijan to Yugoslavia, Hungary, Ukraine and Bulgaria to German, Finnish and Chinese Revolutions. Comrades from within Turkey also made important contributions on the building of Red Army, construction of the socialist economy, and the gains of women after the October Revolution. All the speakers emphasized that the struggle against imperialism, barbarism and fascism can only be accomplished by a revolutionary alternative. The records of the meeting and all the speeches and contributions will later be broadcast via internet.

The whole event was not carried out in the nostalgia of a beautiful moment that has survived for a certain time; but dedicated to display a program of future revolutions and the necessity of construction of vanguard parties to make upcoming revolutions and struggles victorious! As a result, one of the most important highlights of the conference was on the construction of a world party of revolution for the working class, a communist international. The closing speeches were made by Savas Michael-Matsas of EEK and vice chairman of DIP, Levent Dölek with the above mentioned messages.

The conference ended in great enthusiasm with the slogan chanted by the audience "Long live the world socialist revolution" and The Internationale sung concurrently in all the languages of the participants.