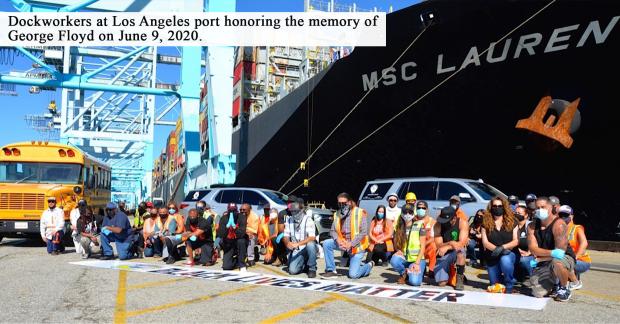 The murder of George Floyd sparked off immense protests and militant actions against racism and police terror across the United States. The people’s uprising forced the federal and state governments to roll back their military operations against the people in revolt, and important city governments to curtail their policing budgets and channel the resources to people of color. Rank-and-file workers have demonstrated their solidarity numerous times. Many members have participated in rallies and protests in their union shirts. The subway drivers’ union in Minneapolis cut off all transportation the day the uprising began in the city. In many major cities, bus drivers refused to take the arrested rebels to jails or police stations. However, union banners have been remarkably absent from the protests so far. Organized labor as a whole has not yet lent its hand to the people in revolt because of the union bureaucracy’s unconditional backing of the Democratic Party and stifling of rank-and-file militancy.

Spearheaded by its Local 10 in the Bay Area, several sections of the International Longshore and Warehouse Union (ILWU) have decided to cross this boundary. Born out of the San Francisco General Strike of 1934, the ILWU has been the most militant union of the West Coast, and has spearheaded many struggles, both economic and social-political. Throughout the decades, they have participated in the Civil Rights Movement, fought militantly against racism, and organized strikes against imperialist wars in Iraq and Afghanistan.

On this June 19th, or “Juneteenth”, they have called for a port shutdown and a massive rally in Oakland, California, with the explicit goal of tying the workers’ struggle with the rebellion against racism. “Juneteenth” is a significant date for African Americans. On June 19th, 1865, the Emancipation Proclamation was read to the black slaves in Texas – nearly three years after its declaration. Since then, it is celebrated by African Americans as a day of emancipation.

Already dockworkers all along the West Coast stopped work for nine minutes at 9:00 on 9th June 2020, to honor George Floyd on the day his funeral ceremony was being held. (The nine minutes symbolize the time during which the killer cop knelt on Floyd’s neck, thus suffocating him to death, but continuing to keep his knee on Floyd’s neck even minutes after he was dead.)

Below, we reproduce the press release of the said ILWU locals for the day of action.

Heeding the call of ILWU Local 10 and other Bay Area longshore locals, the presidents of ILWU’s Coast Longshore Division voted unanimously Monday, June 8, for all members to withhold their labor and shut down the 29 West Coast ports for eight hours on Juneteenth, June 19 — the holiday celebrating the end of slavery in the United States.

“In fact,” their statement continues, “it is a matter of life and death. ILWU has a proud record when it comes to taking action for social justice. The time is now to use our power,” the union leaders stress, “for our union to shut down all West Coast ports, in solidarity against racism and repression.”

“Juneteenth, Friday, June 19, is the most appropriate day,” the presidents declared.”

Clarence Thomas, past Secretary-Treasurer, ILWU Local 10 and co-convener of the Million Worker March in 2004, explained the significance of the work stoppage when he said, “For many years now ILWU, and Local 10 in particular, has been protesting the racist policing of African Americans. And we understand,” said Thomas, “that the way these murders can be stopped is when there are economic consequences.”

“We think that the most effective way to stop police terror,” Thomas noted, “is by the working class taking action at the point of production: if the working class is going to be heard, labor must shut it down.”

ILWU Local 10 has joined with Local 34 and Bay Area community and class-struggle organizations to form the Committee to Stop Police Terror and Systemic Racism. A further goal is to stop plans for the privatization of the Port of Oakland — which would take away essential jobs for working-class African Americans in the Bay Area.

The ILWU locals, along with the community and class struggle organizations involved in the Committee to Stop Police Terror and Systematic Racism, are calling on unions across the country to join them and initiate actions on Juneteenth. As the Bay Area ILWU presidents state: “Now is the time to act.”