Urgent call for international solidarity with the metal workers strike in Turkey! 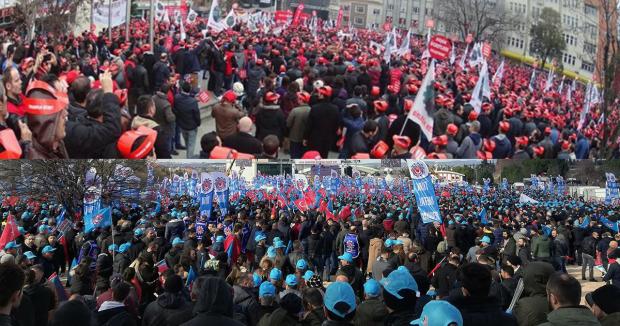 On the eve of an approaching metalworkers’ strike involving more than 100 thousand workers in Turkey, DIP has launched an international campaign of solidarity with the striking workers, in the face of a most probable ban on the strike by Erdogan’s government. You can extend your solidarity also by writing to metalstrikesolidarity@gmail.com and sending in your signature for the petition. Here is the link to a video that explains the background to this strike: https://www.youtube.com/watch?v=hBOkNzyj44o&t=22s.

More than a hundred thousand metal workers in Turkey are getting prepared to launch a strike, a sizable section on the 5th of February, 2020. This comes after months long bargaining process with the bosses in the metal industry -which constitutes a strategic core by providing a large share of exports vital for Turkish economy. The industry covers sectors like automotive and production of every kind of white goods and machine parts as well as casting, essential for other lines of business. Both historically and during the recent years, metal workers have been the most active division of the Turkish working class in the class struggle.

From 2018 on, the Turkish economy has been passing through a crisis where stagnation and recession accompany inflation and high cost of living as well as towering unemployment. This, as one might guess, creates unbearable conditions for the toiling people in the grip of a deep poverty. Metal workers, now once again, act like an icebreaker for the whole population to shake off and break the chains of despotism that puts immense barriers against the struggle of the working class, the youth and the people in general. Metal workers preparing for the strike know this very well due to their previous strikes banned by the government with the lame excuse of violating national security.The government has banned three metalworkers’ strikes as well as large strikes in the glass, petrochemicals, public transportation and banking industries.

Once again, the bosses threaten the strikers with a ban. Such a forbidding of the strike will indisputably be illegitimate, unacceptable and unlawful! The constitutional court has ruled that previous strike bans signed by president Erdogan and the government were unlawful and even ordered them to pay indemnity! Relying on that resolution, one of the metal workers’ trade union –the United Metal Workers Union (Birlesik Metal-Is), a member of DISK (Confederation of Progressive Trade Unions of Turkey) and IndustriALL- has already declared that they will not acknowledge another ban and carry on the strike come what may.

This was stated in a lively demonstration of workers in Gebze, one of the working-class cities where thousands attended the rally. On the same day in another working-class city, Bursa, tens of thousands gathered in a huge demonstration upon a call of the Turkish Metal Workers Union (Turk Metal, member of Turk-Is, Confederation of Turkish Trade Unions) and warned the bosses to accept their demands. Even a third union, close to Erdogan’s government party AKP, is getting prepared for the strike. Almost every day, workers march in their factories in thousands during shift changes, put into practice work stoppages for hours and start forming strike committees to reject the extremely low wage rises and a three-year contract proposed by the bosses instead of the long-established biannual collective bargaining system.

This struggle of the metal workers can open a new phase of peoples’ fight with the despotism of Erdogan. It has a potential to condition the whole agenda of the society around the rights and demands of the working class and the toiling people. In the bosom of this struggle, naturally would the flowers of fight for freedom blossom whose examples could well be found in the revolutionary struggle of the working peoples of the region in the Middle East and North Africa (Algeria, Sudan, Lebanon, Iraq and Iran), as well as struggles farther away in Europe (France) and Latin America (Haiti, Puerto Rico, Ecuador, Chile, Bolivia and Colombia).

The workers bring forward the famous slogan of the peoples’ rebellion that started with the Gezi Park protests: “This is just the beginning, let’s carry on the fight!”

International solidarity is necessary and urgent! Bosses rely on the despotic regime favouring them, on the other hand, the only thing workers can trust is their organized force and international proletarian solidarity. Factories in the process of strike include Ford, Renault, Fiat, Mercedes and many similar international companies, imperialist exploiters of fraternal workers of other countries too.

We ask you to sign the following brief petition on behalf of your union, association, society, professional organisation, mass organisation, neighbourhood committee, political party or organisation, socialist magazine or journal or in your own name as a union organiser or activist in other areas, an intellectual, militant of a political party as a show of solidarity with what promises to become one of the most important movements in this country that has living been too long under the iron fist of Erdogan’s despotism.

“We, the undersigned parties, trade-unions, leaders as well as rank and file activists of class struggle and intellectuals, support this important fight of the metal workers of Turkey against international and local capital and declare our full solidarity with their strike. In case of a ban on the strike, we declare that, according to Turkish legislation and jurisprudence, as well as established international legal norms, it is their right to resist this unlawful act, defend their right to strike and refuse to leave their workplaces.

We pledge to organize concrete actions of solidarity with the strikers, who through their fight are uniting the struggle for bread and freedom in Turkey. We will react in response to a possible intervention by the government in this lawful right to strike to ban this very important action.

We call on working class forces and progressive movements in all countries to take sides with the strikers against the increasingly despotic regime of Erdogan and his government in the service of capital.

Metalworkers of Turkey, we are in solidarity with your action! Rest assured that the whole world of international labour is with you in this struggle!”