UFCLP Statement: Unions to duty! Combine the fight for bread with the fight against racism and police terror! Forward for a general strike! Forward against military rule! (2)

by United Front Committee for a Labor Party
June 15, 2020 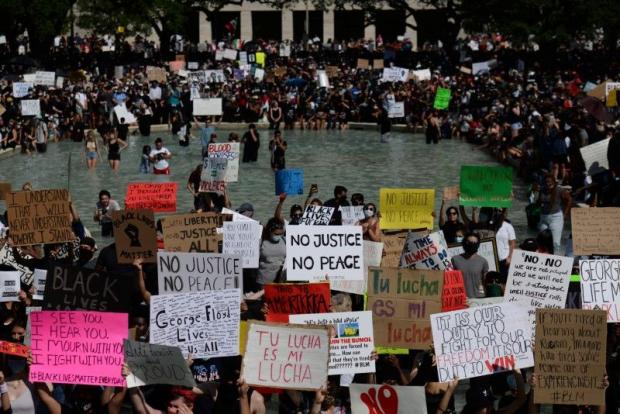 The struggle continues most fiercely all across the country! The people in rightful rebellion have conquered important gains, such as curtails in police budgets and abolition of curfew orders in some cities. Despite this retreat, however, the bosses, with their parties and killer cops, continue to scheme to condemn the workers and the oppressed to death. In California, the police shot dead another brother, Erik Salgado, just recently.

We should never forget that the Democrats are as criminal as the Republicans in the oppression of people of color. This has been the case in the past, and this is so now!

The largest criminal bill this country has ever witnessed was passed under the Democratic Clinton administration. The Violent Crime Control and Law Enforcement Act of 1996 provided an additional force of 100,000 and an extra budget of $9 Billion to the police, created 60 new death penalty offenses, and eliminated federal assistance for convicts. This bill was written by no one other than the current Democratic presidential nominee Joe Biden, was voted yea by most Democrats (including Sanders), and is still intact!

Having included a person of color in their line of presidents does not acquit the Democrats from these crimes. Let us never forget that more immigrants were deported under Obama administration than under any other, including that of the blood-thirsty warmonger that was Bush. Let us never forget that even the ICE arrests on the southern border have been higher during the Obama period than the current disgraceful administration. And just recently, Biden, perfectly in line with his authorship of the criminal crime bill, came out in support of – killer cops!

The union bureaucracy is the barrier between the working class and the oppressed people’s movement!

Eager to tail the Democrats to their last drop of blood, the parasitic union bureaucrats are refraining from mobilizing the rank-and-file in solidarity with the people on the streets. The contrast between the bureaucrats’ cold distance from the matter and the bravery of the rank-and-file who have been participating in rallies and actions on their own initiative is appalling. Organized labor’s participation in the movement is vitally necessary for success; and therefore, so is the break from the Democrats and their henchmen, the bureaucrats!

Workers and oppressed people of color cannot rely on the Democrats for defending their rights. They must take the matters into their own hands. Labor’s own political party is necessary for the fight against poverty, racism, and police terror!

We shall not stop until   the bosses retreat from their criminal plans, all killer cops are persecuted, and every trace of racism and fascism is uprooted from this country!