UFCLP Statement: Unions to duty! Combine the fight for bread with the fight against racism and police terror! Forward for a general strike! Forward against military rule!

by United Front Committee for a Labor Party
June 13, 2020 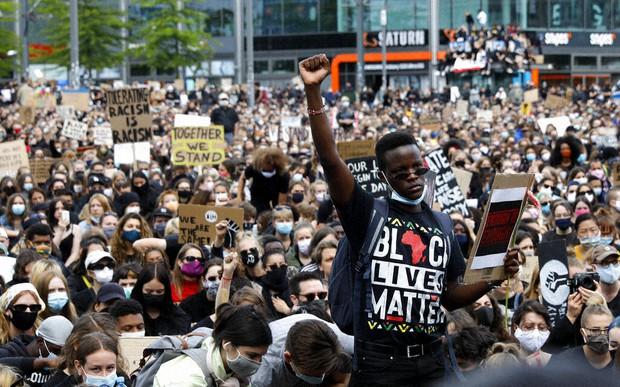 After a week full of people’s militant action, Trump retreated and pulled the National Guard out of DC and some other cities. Some city councils have voted on defunding their respective police departments and channeling the resources to the betterment of African American communities’ living conditions. These are major victories on part of people in revolt!

But the fight is far from being over! The killer cops are still on the streets, claiming lives. The danger of fascist thuggery and militia skirmishes are still lurking on the horizon. There is no guarantee that Trump won’t retaliate to his temporary retreat to curtail civil rights and liberties. Equally important, the bosses and the politicians of both parties are still plotting massive layoffs, wage cutbacks, and privatizations to make the working class bear the weight of the economic collapse.

Thus, both the police and the Democratic and Republican politicians reveal themselves once again to be the paid henchmen of the bosses. The police roam around on the streets hunting for people of color to gun down. The politicians are rubbing their hands as they plan their criminal acts that will claim many lives from the ranks of the working class, predominantly from the workers of color.

Let us not be tricked by the false sympathy of the politicians!

Former President Obama declares that people of color’s lives matter. How generous of him!  Why has that thought never crossed his mind as he was cracking down on the rebellion in Ferguson a few years ago? The Democratic mayor of San Francisco declared that she will “redirect funding from SFPD to support the African-American community”. Then why is the City of San Francisco still approving of the clearances, gentrifying developments, and union-busting measures that hurt workers and people of color?The new-found generosity of politicians of all ranks vanishes as soon as they face the problem head-on.

The only way out of the double attacks of the racist police and capitalist politicians is labor’s support for the rebellion! Unions to duty! Defend the workers! Strike!

Right now, the forces of the people and the bosses’ government is on a stalemate. In order to move forward, the working class needs to enter the field with all its force, and cut the circuits of power where they are the most vulnerable. The bosses might have their parties and police, but we make everything work. In order to make the bosses bleed where they hurt the most, we should take action at the point of production. That is where they are the weakest, and we are the strongest!

We have witnessed massive rank-and-file workers’ participation in the rebellion from its earliest days onwards. But the unions’ participation, with their full-fledged organizations, power, and banners is yet to be seen. If the unions don’t take action now, they will be completely paralyzed when the same police who kill the people on revolt today will crack down on the workers defending their rights tomorrow.

We shall not stop until the bosses retreat from their criminal plans, all killer cops are persecuted, and every trace of racism and fascism is uprooted from this country!