by United Front Committee for a Labor Party
June 6, 2020 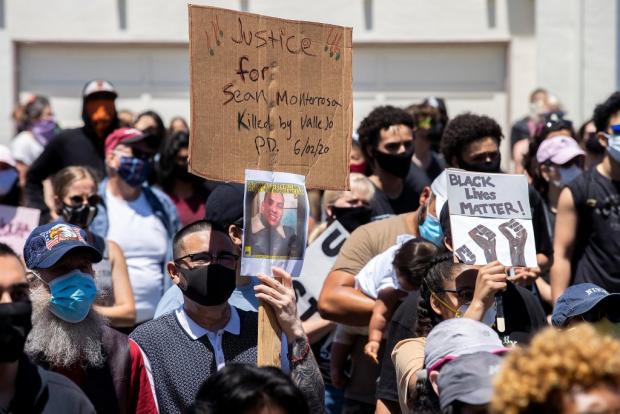 Another brother has fallen victim to the racist attacks of the police just when the people of his city was protesting racism. Sean Monterrosa, a 22-year old Latino, was shot dead by the police in Vallejo, California, amidst the rebellion against racism. The police, afraid of the rebellion already sweeping the streets, did not disclose their disgusting crime until a day later.

The police’s and the bosses’ racism knows no shame. Monterrosa was killed on false accusations of pointing a gun. When the news came out that what he was carrying was a hammer, and not a gun, the police took another ridiculously disgraceful step, and declared that he was a “potential looter”.

The police have therefore confessed that Monterrosa was murdered with no proof of crime whatsoever. That is why they hid the news of his death for a full day. Everybody knows the criminals are the lackeys of the unlawful, unjust social order – including the lackeys themselves!

We repeat the mournful and furious sentences we uttered after the passing of brother Floyd. May brother Monterrosa rest in power! May his friends and family be assured: his death will be neither forgotten nor forgiven! The names Floyd and Monterrosa are inscribed into the common heart and memory of the working class and people of color unforgettably and inseparably. Their memories shall fuel our anger and enthusiasm until the day of reckoning comes.

This disgusting act of the police once again reminds each and every one of us an important fact: worker’s fight for bread is inseparable from the fight for freedom and against racism! Let us never forget that brothers Floyd and Monterrosa were both killed in Democratic states. Police departments under Democratic jurisdiction are no different than those under Republican rule when it comes to massacring people of color or curtailing democratic rights of assembly. As the economic collapse deepens, and as the working class fraternizes and unites to defend its rights, neither party will have any problem in attacking it most viciously.

Curtail orders in some counties of California might have been lifted, but let us take stock! This is not because the California Democrats are nicer than the Republicans anywhere. They backed down in the face of the bold and brave stance of the people of San Francisco and Oakland, protesting against the curfew after the curfew deadlines!

We shall not stop until every killer cop is persecuted, every criminal lackey of the bosses is discharged, and every bit of racism is uprooted from this country!